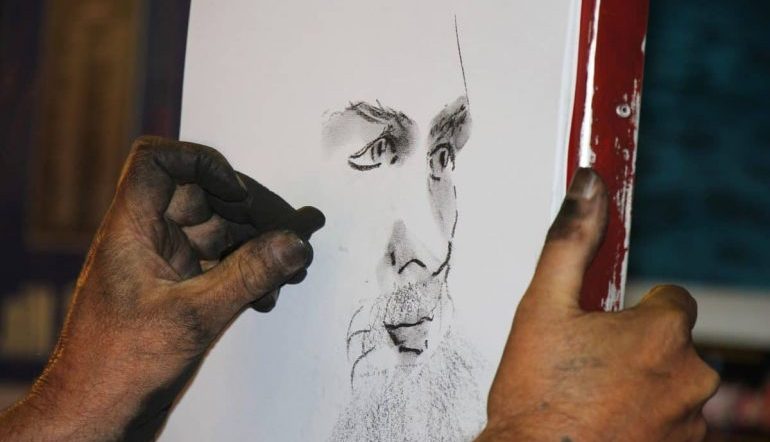 Blind contour drawing encourages art students to draw from life without taking their eyes off the subject to look at the paper, using a continuous line. “Don’t try to ‘get a likeness’ of your model,” writes Kimon Nicolaїdes in The Natural Way To Draw. “Draw strangers if you can because you care less what they look like…Keep it clearly in mind that YOU ARE NOT MAKING A PORTRAIT.” The pencil passes over the paper as if it is actually caressing the edges of the subject. When the hand moves quickly, “the changes pile fast on one another and only the crescendos of movement will be felt. The contrasts are emphasized…There is just as much gesture in the features and the sum-total of the features as there is in the body or any of its parts.”

Something like this takes place in the sketching of a character, whether biographical or fictional. Characters in literature, as in life, are of course unknowable at their core. Some figures, though, are especial nullities, whether from natural reticence or trickster slipperiness. Still, we find writers attempting portraits that trace around their more or less absent subjects, using a collage of pauses, elisions, lists, notes, free association, quotation, a kind of descriptive stutter; a thin, discontinuous pencil line that implies a profile.

Melynda Fuller, writing about Shawn Wen’s portrait of the mime Marcel Marceau, A Twenty Minute Silence Followed by Applause, identified some of this lineage of allusive, fragmentary portraiture (“Books continue each other, in spite of our habit of judging them separately,” wrote Virginia Woolf): Susan Howe’s My Emily Dickinson, Wayne Koestenbaum’s Jackie Under My Skin, Nathalie Léger’s Suite for Barbara Loden. Wen works as a radio producer and Leger a curator, both professions that entail assembling coherent narratives from heterogenous materials. The forms of their books mimic their subjects’ strategies for escape: fragmentation, defamiliarization and dissociation, and evasive resistance.

But what kind of subjects invite such an approach? The intellectually engaged but socially isolated Dickinson would seem to have little in common with the worldly but opaque Jackie O or the melodramatic Marceau. Perhaps these are goetic, mercurial characters not easily encapsulated in standard biography. Perhaps unknowable subjects force us into active interpretation, like the audience for Marceau’s dumbshow or the recipient of Dickinson’s playfully cryptic letters. Perhaps the elision of, let’s say, demographic specificity makes a more intriguing portrait in an age when nearly every aspect of a person’s life can be known: an endorsement of secrecy and inference. Perhaps, too, this is actually a familiar technique in fiction transferred into what we might call “creative biography”—the reticent narrator whose character we come to understand only gradually and by inference, applied to a real-life protagonist.

In 1983, French artist Sophie Calle found an address book in the street. Before returning it, she copied the contents and contacted each person for interviews: “I will get to know this man through his friends and acquaintances. I will try to discover who he is without ever meeting him.” She published her results daily.

Calle studied the address book as a physical artifact and as a quasi-scientific data set (letter distribution, geographical range, handwriting analysis). She interviewed acquaintances and colleagues of its owner, whom she called Pierre D. As an exercise in the genial invasion of privacy, the revelation is, as much as anything, the casual willingness of her interviewees to discuss with a stranger, for publication, their judgments of Pierre D., the traumas of his professional life, his linguistic tics, his seduction technique, and his “conventional” sexual fantasies. Calle has the benefit of articulate, self-conscious respondents; The Address Book reads not just as a portrait of a random cineaste but of a Bolaño-esque world of urban intellectuals. Their general reaction is curiosity, even titillation. It’s not until her tenth contact that she encounters outrage and seems to consider for the first time her conscience—up until that point, she has presented her project as a quirky game of aestheticized stalking.

But these pangs feel outdated in a confessional age. Fiction traditionally emphasizes detailed interiority—what it feels like to be a specific person. Calle’s project gestures toward the premodern—classical—idea that it is a person’s public presentation that is the sum total of their existence, that actions count, that the collective impression made by a mass of incomplete glosses of a person add up to a more meaningful portrait than their own nuanced but functionally irrelevant internal life that, after all, is only experienced by that one person.

Anyone with a low-level public persona—this is, in the contemporary world, nearly everyone—will become accustomed to strangers expressing opinions of them. The vertigo of discovering that one is a topic of conversation when not present can be profoundly disturbing, the adult version of the revelation of object permanence. But with the lowering of taboos around public airing of private grievance and experience and the increasing intimacy of public relationships, the blurring of public and private personae encourages the idea that someone is who they seem to be. Facebook isn’t the first entity to realize that a person can be sketched with reasonable accuracy using a few data points about taste, social circles, and political sympathies.

If the outlined subject is one who resists being seen, the definitive recent example in fiction is Faye, the narrator of what has been conveniently referred to as Rachel Cusk’s Outline trilogy of novels. In Faye, we find a narrator of extraordinary gifts of observation and intuition who is committed with a monk-like renunciation to refusing to draw any conclusions from those detailed perceptions. In other words, her noticing power is deployed entirely in the service not of amassing information about her world but in underscoring the depth and specificity of the impossibility of that knowledge, the ludicrousness of assuming that anything can be definitively said or known about anyone, including oneself.

Despite her pathological self-effacement, it is Faye whose character is being relentlessly revealed. She turns a spotlight on her discussants by way of hiding behind them; they are, however, in no way “characters”—their voices are all hers. They exist only to illuminate aspects of her by what she chooses to tell of their stories and how she reacts. They play more as projections of her godlike consciousness permeating the world—Faye’s narrative eye is distinct from but functionally similar to omniscience—than as independent entities, like stinging tendrils of a medusa floating through a chilly sea. The true and only subject of the books is Faye herself, and what her ruthlessly critical scrutiny reveals about herself by “beginning to see [her] own fears and desires manifested outside [herself]…beginning to see in other people’s lives a commentary on [her] own.”

The books are, in their emphatic but understated way, transparent in their themes: the construction of narratives of our lives; a valorization of standing-aside, effacement, and abdication; the small flaws that undermine emotional architecture; human narcissism; “the relationship between disillusionment and knowledge”; the unpredictability of emotional weather; the impossibility of correctly divining the inner life of another person; that, in fact, it is words themselves, and the attempt to capture anything like reality in them, that are the problem—why bother to speak at all? The muted but insistent drumbeat is the delusion of any individual’s imagining their importance to anyone else. Faye has ceased to understand herself as a coherent “character” through the intimate banality of the transformation of love into hate, the arbitration of guilt and responsibility, the fragmentation of shared objective truth into irreconcilable subjectivities—“the sense that everything in my life had become atomized…as though an explosion had send them flying away from the centre.” The novels constitute the salvage work of personality. “So much is lost,” says one of her conversants, “in the shipwreck. What remains are the fragments, and if you don’t hold on to them the sea will take them too.” We come to understand Faye as the negative space adumbrated by these fragments, like the survivor of an earthquake trapped in a fortuitous air-pocket amongst rubble.

One pictures Nicolaides teaching contour drawing, turning a freshly-sharpened pencil point in the light, looking for flaws, then turning it to the page—in Cusk’s words—“like a swallow swooping over the lineaments of the landscape, describing but never landing.” All of the books considered here reject the ideal of summation through detail, the goal of total knowing through what  E.M. Forster called “word-mass.” For Cusk, it is a matter of narrative nihilism: “I have come to hate stories,” she writes in her divorce memoir Aftermath. “You are refusing to tell the story any more,” says a character in Kudos, “because you don’t believe in the characters or in yourself as a character.”

The embrace of fragmentation rebrands as realism the asymptotic impossibility—the approach without attainment—of total description of a subject. “[L]acunae are as deep as solidities,” writes James Wood in How Fiction Works. “[A]bsence in characterization can be a form of knowing as profound as presence.” Any character, he says, is a “bundle of words,” the sum total of things that are said about them. Incompletion returns something of the secrecy of life to subjects who seem like they have something to hide (even, for fictional characters, from the writer).

The writer must confront their empty stage with nouns—facts. “Facts have mass,” Sam Sacks writes in his essay “The Page Is Truth: The ‘Small Lives’ of Pierre Michon.” “Compile enough research and behold the man”: a Sisyphean motto for the mime as for the writer, both of whom begin with the immensely bounded emptiness of the black stage and the bare page, creating a world, Genesis-like, with their fingers. But the sheer accumulation of facts about a person contains a pathos of futility. The center of the sketched contour, the skin crowded by fact-mass, must be left void. “By vast pains we mine into the pyramid;” writes Herman Melville in Pierre; or, The Ambiguities, “by horrible gropings we come to the central room; with joy we espy the sarcophagus; but we lift the lid—and no body is there!—appallingly vacant and vast is the soul of man!”

Thus fragmentation. The descriptive effect is like a flashlight flicked on and off in a dark room, illuminating in obscure sequence the parts of the elephant and only by implication the whole. Edward Said found in artists’ late style a valorization of “intransigence, difficulty, and contradiction…resistant to summation,” unfinished, discontinuous, “communicat[ing] itself…only through the blank spaces.” In Orientalism, Said wrote that the attempt to assemble a complete set of facts about a thing—a civilization, or, let us say, a character—is a hallmark of the colonizing mind, an attempt to make it “ontologically stable,” thus “to dominate it, to have authority over it.” (For Cusk and others, resistance to being pinned down is inextricable from their subjects’ relationship to their femininity.) The outlined, fragmented subject is one who resists domination, resists definition. As in Frankenstein, creation from beautiful parts rather than integrated whole will always result in something subversive and uncontrollable.

If the move from Classical to Romantic understanding of a person is the move from action to emotion, from exterior to interior, then the outlined subject is the reflection of the postmodern turn past the idea of a coherent identity. In the digital age, an identity is a file of discrete data points—purchases, acquaintances, whims, fantasies, obsessions, procrastinations—dashes and dots, a summary preferable to an exposition, in which the details can be filled in later, or rendered unnecessary—the void of identity found irreducible, and conceded. What is a person, finally, but the sum of what they have, what they do, and the space they take up? The outline, the contour, of skin, for all its fragility and permeability, for all the fathomless depths of intention and desire it conceals, remains for many the most salient fact of their lives in the world.