So I was driving to New York City a few weeks ago for a conference at NYU, where I talked about the ways story and song benefit public discourse. To say I’d been obsessing over the political impact of storytelling would be an understatement. So maybe it’s no surprise that I got worked up over this radio conversation about the #YesAllWomen Twitter trend:

“[D]o I think [#yesallwomen] can be beneficial in shifting the conversation?,” journalist Keli Goff asked on NPR’s “Tell Me More.”

Sure. Do I think it is beneficial in the ways that if all the people who were doing hashtag activism actually voted or wrote letters to their members of Congress or actually gave donations to specific organizations doing specific work, no I don’t see it as particularly beneficial, except for creating platforms for people who want more attention for themselves—particularly in social media. 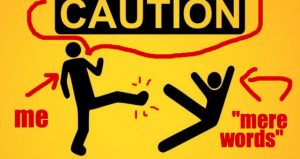 some objectively beneficial socio-political result. If all you’re doing is storytelling, you probably just want attention. And maybe you should (shut up and) do something that actually matters, like vote. Or picket. Or call your Congressperson. But for god’s sake don’t “just talk” or “just write.”

Similarly, in a piece for The Daily Beast, Emily Shire claims that #YesAllWomen “jumped the shark” because it lost its ties to the UCSB shooting that inspired it, and became a mere record of women’s experiences of misogyny. Shire insists that #YesAllWomen needs to “actually inspire people to act, rather than merely tweet.” She grants that the trend “has the potential to translate the inspirational stories…into positive changes in the treatment of women,” but suggests that the actual sharing of these experiences—the writing of them—means nothing in itself. In Shire’s view, these tweets are indulgent, gratuitous, self-pitying; a way to feel involved in something meaningful without actually “doing” anything.

Such write-ups echo a growing pile of articles about “hashtag activism” that worry over the millions of people who think they’re “activists” just because they can type a pound sign. And while I can’t argue with questioning simplistic Faux Concern on social media, I do get worked up about the “mere words” part: the implication that speech, writing, and language are necessarily easy or inconsequential, whereas moving one’s body or wallet is “doing something.”

And okay, the world doesn’t need another article about #YesAllWomen. But our tendency to dismiss ‘mere words’ as useless responses to tragedy or trauma needs a fierce kick in pants. So I’m here to deliver.

I may be preaching to the choir by sounding off here at Ploughshares, but I think even we writers discount the supposed “real-world” efficacy of our work. Maybe this is why we often fail to find outlets, audiences, and/or “uses” for our writing; why we can’t get ourselves to do the sweaty work of getting it out and read: we fear its triviality. After all, a poem isn’t a vote, a (“real”) protest, or an engine for social transformation…right?

Please. Writing does a work, and this work isn’t indulgence, self-pity, or socio-political neglect. It’s not even (mere) entertainment. I’m not saying this to cheerlead you or inflate your writerly egos. I’m saying it because writing is a choice against repression. It’s an active defiance of our tendency to keep quiet about things that society deems “un-talk-about-able”. And rejecting suppression has proven and measurable physical, mental, and social benefits. Seriously.

Get Me a Bunch of Heretics.

So the NYU conference was about heresy, and I zealously addressed the need for what I call social heretics: people who willfully violate the conventional bounds of public discourse. Not by adolesently disregarding courtesy or kindness, but by giving a (thoughtful) middle finger to the social contract that prohibits honest conversations about realities like domestic violence, mental illness, poverty, racism, classism, misogyny, and death.

Why do we need these heretics? In part because social psychologist James Pennebaker has confirmed that regardless of the trauma–sexual abuse, divorce, the loss of a loved one–people who don’t talk about their experiences suffer more over their lifetimes than people who do. And not just from vague feelings of sadness. People who can’t verbalize their experiences are hospitalized more often, develop suppressed immune function, and have higher rates of depression and suicidal ideation. Pennebaker writes,

People who are unable to talk about significant personal experiences are at increased risk for a variety of diseases.

Psychologist Dana Jack has long researched women’s tendencies to “self-silence,” and “consider[s] self-silencing to be a crucial element in precipitating depression.” Psychologist Geoff Lowe writes that “suppressing emotional thoughts and repression can lead to poorer health outcomes.” In short, an inability to talk about stuff is physically and mentally devastating.

But there’s good news: “[W]hen people confront traumas by talking or writing about them, their mental and physiological stress levels drop,” Pennebaker writes. Psychotherapist Shanee Stepakoff notes that “[t]he open sharing of original work […] directly counters the destructive psychosocial dynamics that characterize isolation, stigma, and silence.” And Dana Jack observes that women become more powerful when they are “visible in their experiences of oppression”—in other words, when they express and discuss them. 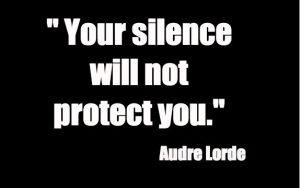 Words aren’t mere servants to votes, donations, and phone calls. They don’t inhabit some unidentified universe beyond “the real world.” Even if your particular writing isn’t committing what feels to you like “social heresy,” any character or moment that illustrates the complexity of human experience helps readers articulate what we individually know but too rarely say aloud: that life is difficult, it hurts, it’s short and yet relentless; we’re bad and we’re good; suffering is unjust and unpredictable; we’re confused and confusing; we often can’t do or be what we wish; we figure it out, or we don’t; time heals or it doesn’t. And all the many ways and reasons (and degrees to which) these truths play out.

Writing and publishing in their myriad forms help us put human experience on the public table, so we can look at it, discuss it, deconstruct or (re-)narrate it. Doing so is significant not because it gives us nice feels (often it does the opposite), but because it has actual physiological, psychological, personal, and social outcomes. That’s not to say literature and writing are important strictly or even primarily because they impact personal and public health. But the fact that they do so is largely ignored, particularly in popular discussions about writing and “activism,” “public efficacy,” and/or “the real world.”

And as long as we continue limiting “worthy” social activity to legislation or donations, or conflating personal testimonies (a la #YesAllWomen or #SurvivorPrivilege) with “lightweight [twitter] involvement that allows for feel-good clicks and commitment-free causes,” we dismiss the individual and social necessity of identifying, articulating, understanding, and sharing our experiences via language. We ignore the personal and public health imperative(s) to defy repression.

The everyday inability to address intricate aspects of the human experience keeps us silent, isolated, sick, and stressed. At NYU, I argued that our cultural conception of Social Propriety is the one god we can’t seem to let die. (It was a heresy conference, after all.) So here’s my admonition, writers: let it die. Whether you’re in the middle of a novel or a hashtag, a poem or a party, notice any urge you feel to speak, to write, to “go there.” Then say what you have to say. Do the work. Get it out.

Lying is done with words, and also with silence.
Adrienne Rich