Home
»
Uncategorized
»
The Ploughshares Round-Down: The Calvary Film and the Purpose of Art

“[T]he barrier between one’s self and one’s knowledge of oneself is high indeed. There are so many things we would rather not know!
— James Baldwin

John Michael McDonagh’s film Calvary begins with priest Father James (played by Brendan Gleeson) preparing to hear an unseen confessor. The confessor reveals that as a child, he was repeatedly raped by a now-deceased priest– and his language for this revelation is violently forthright enough that I won’t include it here. McDonagh chose this “startling opening line” because, in his view, the euphemistic language of “child abuse”

has enabled us to detach ourselves . . . because we never actually think about what it means to be abused every day of your life. What that physically means.

The grim candor of his opening line is indicative of McDonagh’s approach to the rest of the film: an experiment in taking viewers where we don’t want to go, leaving us embarrassed and backed into our seats, waiting for relief or levity that doesn’t come. 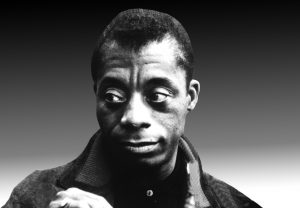 It’s this effect that kept reminding me of what James Baldwin identified as an artist’s purpose: “to correct the delusions to which we fall prey in our attempts to avoid” what we don’t want to know, either about ourselves or our society. So as reviews have piled up over the last few weeks, I’ve been surprised to find so few of them discussing Calvary‘s venture into dis-ease. They focus instead on either “the film’s twist on the classic ‘whodunit’,” or on Gleeson’s performance as the “good priest.”

Other critics have worried over how unrealistic it was for McDonagh to place so many crazy characters in one tiny Irish town, or for the town’s “cynical gay hustler” to speak entirely in exaggerated “movie-gangster patois,” or for the “over-performing” characters to have such a “sense of being characters“. But these were obviously deliberate choices, and many of them drive the movie’s overarching disconcertion. Meanwhile, Calvary‘s uncomfortable teetering between dark comedy and dramatic profundity has been damned as inelegant writing or “weird jokey-ness.” And while I agree that the writing’s distinctly uncomfortable, I’d argue that the discomfort is the point: the viewer laughs, only to regret or question her laughter in the next breath. Is this absurdity hilarious or terrifying? Is that character ridiculous or tragic? Is this dialogue supposed to feel embarrassingly trite?

So I couldn’t not register the movie as performing its Baldwinian artistic role. Calvary risks both religious and social blasphemy to get at some (often literally) unspeakable truths. It’s biting in its exposure of the absurdity of justice, relationships, faith, wealth, vocation, and authenticity . . . but it simultaneously refuses to (entirely) dismiss any of these. The screenplay lurches from domestic violence to gaelic wit, from cannibalism and impotence to gutter humor and something like forgiveness. It’s not toying with our inhibitions so much as asking the questions they hide: is justice even a thing; what are the limits of “blame;” how do we live with absurdity; how do we hide from ourselves; does regret (or “penitence”) matter? And are there really reasons to live?

And finally, Calvary embarrasses us with its characters’ flagrant neediness. They loathe Father James, but they also patently need him, seeking him out with their dramatic questions, bouncing off of him their rage and/or exhaustion. Their conversations are painful not because they exhibit trite writing, but because they nevertheless feel so damned legitimate. Our growing discomfiture in these scenes comes less from feeling sorry for Father James (and his growing isolation) than from not wanting to face the questions we’ve otherwise avoided by labeling them “trite.” There’s something loathsome about witnessing such groping need behind such amusing caricatures.

And they are caricatures. While Father James is persistently present and accessible–with a human face we see behind, into, with–every other character is a persona, ever exiting his own experience. The banker goes on about money even though “it doesn’t mean anything” to him; the butcher over-pretends his own contentment; the adulterous wife plays at being the town seductress; the atheist doctor delivers cynical jabs because it’s his “role”; the second priest lamely approximates gratitude or compassion as required; the murderous teen makes grotesque choices because that’s just how God made him. And that exaggerated movie-gangster patois? It embodies the affected-ness of the hustler’s (un)chosen role. You keep waiting for him to drop it, and he doesn’t. He won’t. It’s painfully awkward.

What little humanness we do get comes in such fleeting moments that we’re tempted to hate the parishioners and their veneers rather than wait and wait for one of them to finally show up behind his ridiculous face. And maybe this is where critics get stuck: they’re embarrassed by the self-aware playacting and chalk it up to Screenwriting Failure.

But Calvary‘s characters only exaggerate our own affectations. If we’re embarrassed, it’s because we recognize our own willingness to take up a role rather than honestly encounter who we are or who we’re with. Or maybe we’re reminded of all the times we pretend not to notice the outrageous veneers on the people around us, wishing we hadn’t seen (through) them. Or the times we wait and wait and still nothing human shows up behind the beloved face in front of us.

The effect of Calvary‘s tonal lurches and its weird characterizations is a creeping empathy for its parishioners. Not for the ways they suffer so much as for their inabilities to feel or reveal that they do. For the ridiculous affectedness that replaces or numbs suffering, for humans’ varied, practiced methods of denial.

The film’s dark humor–along with its refusal to let up on discomfort and unwelcome sympathies–harks to O’Connor’s “A Good Man Is Hard to Find” or MacLeish’s J.B. I can’t say Calvary belongs with these in the classroom or canon, but its frank exposure of the absurdity of justice or theology in light of both trauma and routine existence feels similarly necessary.

In “The Creative Process,” James Baldwin writes that artists must always war with society– by reminding it that “the truth about ourselves,” both as individuals and as a collective, “is always at variance with what we wish to be.” In this sense, maybe it’s not surprising that Calvary‘s critics have stayed in safe territory: avoiding the film’s relentless awkwardness, whistling in the dark. I don’t blame them.

For my part, after the final scene, I sat waiting for music, sound, light, another scene, anything to lift the weight of jumbled sympathies. I realized I wasn’t breathing. This is strange praise for a movie, but it’s how I know it did an artist’s work. Calvary was a lush disabusal: lovely, crushing, with an ending silent as hell.