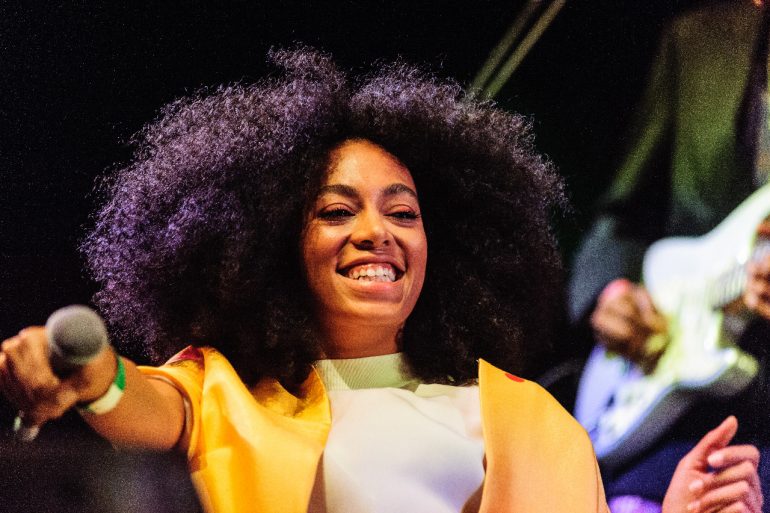 Between Jill Abramson’s indecorous firing and Amazon’s ongoing vendetta against Hachette, the publishing world gave me a lot of potential topics for the Ploughshares Round-Down this week, which I’m covering for Tasha Golden while she takes some well-earned time off. And yet there’s another, completely non-publishing-related story that I feel compelled to discuss instead, about which I have seen more tweets and Facebook updates and blog entries recently than almost anything else.

By now, the story has been hashed and re-hashed enough that I’m sure you know the basic outline. Solange, whose sister, Beyoncé Knowles, is married to Jay Z, attacked the latter in an elevator last week as all three of them were leaving a swanky party in Manhattan. Leaked video of the altercation soon prompted a storm of speculation, both online and in print. What could have provoked Solange to lash out like that? Whither such vitriol?

We’ll likely never know the answer, of course—but amongst all our feverish attempts to uncover the truth this past week, there’s a lot we can learn about writing good fiction.

Here’s a writing tip that gets trotted out all the time: in the cutthroat jungle of the slush pile, the only way to get your story noticed is to wow readers from your very first sentence.

This is good advice, but many writers seem to think that following it means writing a lustrous bijou of a first line, full of pretty words like “lustrous” and “bijou,” and draped across so many commas and em-dashes and “ands”—those sophisticated tools for introducing extra clauses and kaleidoscopic re-analysis of the surrounding words and ideas—that no reasonable person could deny the obvious linguistic talent on display.

And certainly, that kind of sentence can make a great opening. A random sampling of what’s on my desk right now, for instance, includes Shirley Jackson’s “The Man in the Woods,” which appeared in the New Yorker a few weeks ago, and opens with this evocative, complex line:

Wearily, moving his feet because he had nothing else to do, Christopher went on down the road, hating the trees that moved slowly against his progress, hating the dust beneath his feet, hating the sky, hating this road, all roads, everywhere.

This is a great first sentence. But then, so is the much shorter, much simpler opening line from another piece of fiction on my desk, Elisabeth Gifford’s novel Secrets of the Sea House (or, in its recent U.S. re-issue, The Sea House): “My grandmother’s grandmother was a seal woman.”

What these sentences have in common—and what makes them both work so well as opening lines—is clearly not their structure or use of language. Rather, it’s the human mystery they contain. Why is this guy walking if he hates walking so much? And how come only the grandmother’s grandmother was a seal woman? What happened since? These incongruities awaken our stubborn human desire to make sense of the seemingly unexplainable, and in doing so draw us instantly into the story.

Or, as Jennifer Lopez put it when asked for comment on the whole Solange/Jay Z business: “[It] makes people crazy and want to know more… If you saw a fight on the street right out here wouldn’t you want to know what happened? I think that’s just a natural curiosity.” It’s that natural curiosity that you should aim to capture the next time you’re trying to write a great opening sentence—because, let’s face it, if your short story can captivate even a fraction of the people Solange has this week, you’ll be doing pretty well.

The Devil’s in the Details

On Friday, the Knowles-Carters finally acknowledged the feeding sharks and released a statement that said, basically: it’s none of your business. But this absence of explanation hasn’t stopped us searching for other clues. What does Beyonce’s latest tweet reveal about the feud? Why did Solange post or delete this or that picture on Instagram? What does it mean that she and Jay Z were spotted shopping together a few days later?

Indeed, part of what’s made Solange’s attack so difficult for people to turn away from is the tantalizing array of details we’ve gotten in its wake. And though I hate to repeat yet another old chestnut, what this basically boils down to is: show, don’t tell. A detailed statement from Solange explaining exactly what she was feeling that night and why she attacked Jay Z would probably kill this story, but each new scene, no matter how tiny or seemingly mundane, breathes new life into that original, compelling setup.

That doesn’t mean there isn’t a place for telling in every story—only that, no matter how much we think we want the whole truth, about public figures or anyone else in our lives, it’s when they don’t reveal their secrets immediately that they fascinate us most.

A Failure of Imagination

A few years ago I interviewed Andre Dubus III about his memoir Townie, in which he describes—among many other things—how writing helped him control his violent urges. When I asked about that, he elaborated:

I don’t want to suggest for a second that writers are more empathetic than other people, because, you know, writers can be big assholes like anybody else. But for me that daily act of writing character-driven fiction—where you’re asking “What’s it like to be you?” of another human being—is a humble and peaceful act, and entirely non-judgmental. And writing kind of kept me in that state. It began to change my vision of people. So it was no longer possible for me to see some snarly bastard in a bar at night and think of him as a prick who needed his face punched. I just kept thinking about his day, and what got him to this moment.

To me this is one of the best descriptions of what good fiction can (and should) do: help us better grasp what makes other people tick. And in that respect, the reactions to the Solange Knowles story are both heartening, in that so many people are trying to understand her outburst, and also deeply disappointing—because a lot of those attempts have been shallow and, contra Dubus, quite judgemental.

The New York Daily News, for instance, led with this: “Solange Knowles attacked Jay Z after designer Rachel Roy got too close to rapper at Met Gala after-party.” Meanwhile, according to Jezebel, the top theories could be boiled down to the following: “She was sticking up for her sister,” “Jay Z insulted her as a mother,” and “Solange is a nasty drunk.”

Writers: we can do better than this. (Humans: us too.) Not that I think someone should write a whole novel exploring Solange’s psyche and motivations for attacking Jay Z, or that gossip columns should resort to fiction. But the problem with most of the news pieces I’ve seen about Solange is that even the putatively “in-depth” ones lean too heavily on cookie cutter stereotypes: she wishes she were more successful, she’s protective of her sister, she has a temper.

These are interesting character traits with which to start a story, maybe, but they don’t really give us a sense, as Dubus puts it, of what got her to this particular moment—of what it’s like to be Solange. To do that, a few sweeping generalizations isn’t enough; we also need to know the more mundane, ordinary things that lead, ultimately, to the extraordinary ones. Case in point is this fictionalized, Herland-esque account of Beyoncé and Solange going to Chipotle after the elevator incident—which, despite its outlandishness, is also far more engaging, in its fully and vividly imagined world, than the news stories that chalk it up to jealousy or filial devotion.

And even if gossip columns aren’t the place for quite such vivid imaginings, I think that we should all strive for more in our reactions to this kind of news—not so much because rich characterization is crucial to the genre, but because, if the Solange affair this week can teach us anything, it’s that we could all stand to empathize with our fellow humans a little better.