Over the last two weeks, the internets have exploded with news about terrible comment sections and how to handle trolls. As writers, we know that since comment sections are where humanity goes to die (Ploughshares comments excepted of course), putting creative work online basically means exposing ourselves to the worst mankind has to offer. (Hooray!) Enter mass advice geared toward writers and artists, telling us how to get past the paralyzing fear of encountering internet trolls. Some of this advice is legitimately helpful, but let me boil down rest of it:

1. Don’t read the comments.
2. Don’t base the value of your work (or person) on internet feedback.
3. Grow thick skin. (i.e., if you can’t handle Internet Evil, don’t publish your stuff.)

It’s not bad advice. But given that it’s aimed at people with so much imagination, it’s unbelievably small-minded. So, dear writers, I’m about to change up the going advice about comment negativity—by fixing its insane, glaring omissions. Read the below, then get to (re)imagining. 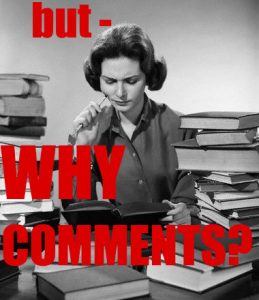 At any given site, creative people should be the first to ask: for what purpose was this comment section created? Do I agree with that purpose? Is it worthwhile to me personally? And is that purpose actually being accomplished?

It’s widely acknowledged that in spite of lofty rhetoric about “community” and “lively debate”, websites offer comment sections because they drive page views—and dollars. Since people love to hear themselves talk, knowing that they’ll be able to “publish” their thoughts directly below a site’s content makes them more likely to visit that site in the first place. And if they comment, they’ll keep coming back to check on replies, and comment yet again. Page views accumulate, especially when there are flame wars. Business Success! In the name of reader-empowerment, readers are actually put in the service of (someone else’s) profit. Sigh.

If, in spite of biz motives, you still love comment sections because they’re pro-community and pro-diversity, consider this: studies indicate that comments can actually keep readers from thinking for themselves, creating tribal dynamics that alter readers’ individual interpretations of data. In addition, sites like Pop Science and (most recently) the Chicago Sun-Times have shut down comments, citing the lack of community and the destructive results of even small doses of vitriol. Other sites now require user identification and/or allow for the up-voting and down-voting of comments as a means of burying the trolls.

Such changes acknowledge that the worthy goals of comment sections are rarely achieved. They also remind us that we don’t have to throw up our hands, saying, “Eh, that’s the internet—we just have to deal with the Gross.” These sites made productive decisions about where and how reader feedback happens. As writers, we can make these decisions, too.

2. Comments Are Not Required for “Free Speech” or Internet Democracy.

The most absurd responses to the Chicago Sun-Times, Pop Science, and other sites that are eliminating or altering their comment sections is that by doing so, they’re silencing the voice(s) of their readers. As Will Oremus argued about Pop Science,

Its editors seem to think of themselves as heralds trumpeting unimpeachable pronouncements from the castle tower to a crowd of subjects somewhere below.

Um. Such reactions indicate an unfathomable blindness to the existence of… the Internet. If a reader wants to respond to an article in any publication, there are innumerable free spaces in which to do so. The fact that Pop Science no longer politely grants its readers space immediately below its own content does not in any way remove its readers’ abilities or rights to publicly respond. If anything, it eliminates lazy, thoughtless reactions (no loss for anyone) and easy access to attention (goodbye trolls). Basically, the change is that a commenter might have to toggle back and forth between a tab for Pop Science and a tab for her own blog site. Oh no.

As writers, we can confidently lead the way beyond comment sections and into more creative and humane arenas for free (and thoughtful) response.

Comment sections are often thought beneficial because they mean that authors are open to correction and criticism (as opposed to coming from some Unimpeachable “On High”). But what happens when those same authors are being regularly advised not to read comments?

And consider the growing number of readers who also advise each other to avoid comments… basically because we don’t want to hate humankind. At some point, we have to start asking who we think is reading comments, and what kind of “voice” a commenter actually has if no one’s “listening.” Perhaps we’re all more likely to get an actual hearing by publishing our own work, or even by organizing a weekly local meet-up about current events.

4. Stop Telling Each Other to Get Over Internet Cruelty.

Ellen Painter Dollar recently wrote that the most common writerly advice about trolls is, “You need to develop thicker skin.” The notion is that haters gonna hate, so just don’t listen to them. And if you can’t handle what people are going to say about your work, don’t publish it. #boom

The problem with this advice is that it keeps us from looking at cruelty long enough to truly hate it. Instead, we accept cruelty, and hate ourselves for being unable to withstand it. This is absolutely backwards.

Cruel things are “cruel” because they hurt human beings. If you’re hurt by something you read online, you’re not weak, stupid, or immature. You’ve encountered something cruel. Hurt is what happens as a result. 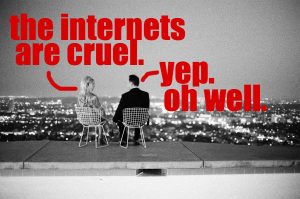 This doesn’t mean you should wallow in all your feels. (Also, if you’re crying yourself to sleep because someone offered a thoughtful critique or published a less-than-gleaming review, you do need a dose of confidence and reality.) But if you’ve encountered threatening, disgusting, and/or mean-spirited comments or reviews, feeling hurt is legitimate. Once we can freely admit this, maybe we’ll set about changing the fact that comment sections attract such cruelty. Maybe we’ll imagine and initiate a cultural shift.

Because here’s the thing: as writers, we’ve often put our imaginations to work figuring out how to not feel hurt, and neglected to imagine how we might alter an online culture that creates and perpetuates cruelty. We keep questioning and adjusting ourselves—our confidence, our sense of worth, the thickness of our skin—rather than questioning or adjusting the presence of cruelty.

No, I don’t believe we can eliminate cruelty from the internet. But I do believe that writers should be asking how we can actively and significantly alter our experiences of cruelty online. It’s a question worthy of our collective creativity and imagination.

The small-minded Negativity Advice we typically hear is a waste of writers’ powerful creativity. Go with this instead:

And in a meta gesture, I’m inviting your comments: