Home
»
Uncategorized
»
The Ploughshares Round-Down: Why Lena Dunham’s New Book is Worth $3.5 Million 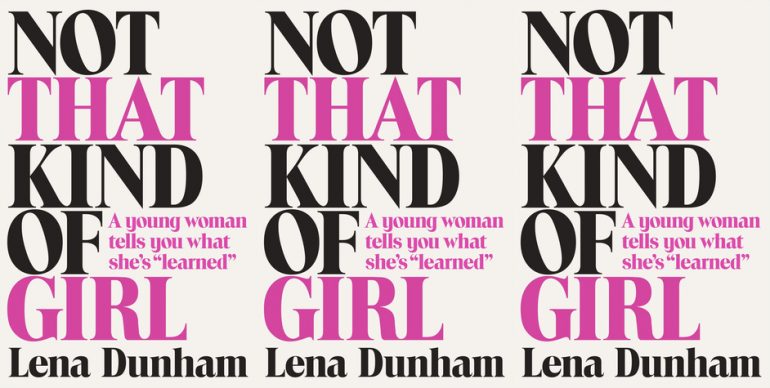 When I talk to a new potential client, one of the things we go over is potential advances. Most nonfiction writers get between $25,000 and $75,000; fiction writers, a fraction of that. Everyone who gets more than that did something remarkable to get there.

During this conversation, many writers have joked to me that they’re hoping for Lena Dunham money. Dunham, the driving force behind the show Girls on HBO, received a reported $3.5 million dollars for her book, Not That Kind of Girl. The advance made headlines, and so did the proposal, which was leaked and linked to all over the internet.

The book could fairly be called “hotly anticipated,” and with the book releasing today, the reviews have started pouring in. Those reviews are generally positive, if not overwhelming. And for the publisher, they do something important: They are all written by people who had assumed that the book would be a cultural phenomenon. Because that’s what Random House paid millions of dollars for–a cultural phenomenon.

Will Random House get its money’s worth? It’s a hard concept to swallow for any working writer. After all, Random House could buy literally one-hundred other decent books for $3.5 million. Heck, they could probably get one-hundred decent novels from writers who’d be willing to take no advance in order to work with Random House. So, was this really a solid business decision? We’ll soon have our answer, so let’s take a look at how the numbers could possibly make sense. It’s highly likely this bet will pay off for Random House.

If you read the New York Times, you know all about Lena Dunham, as it’s run over 300 stories mentioning her since she released her independent film Tiny Furniture. Two years ago, at the peak of her popularity, she signed a book deal with Random House for millions of dollars. Not That Kind of Girl is part-memoir, part-advice-for-young-women. It has a tone similar to her HBO show Girls, except it is, apparently, more personal and less humorous. Every publication has a take on it, though I recommend The Daily Beast’s review if you want to know more about the book than about the person reviewing it.

When she signed the deal, many inside the industry were skeptical. What could she have left to say about her short life that she hadn’t already put into her show? What if everyone’s tired of her shtick by 2014? It will be a bestseller for sure, but will it spend enough weeks at number one to justify that payout?

You’ve probably heard of big summer blockbuster movies referred to as “tentpoles.” The idea is that the studios rely on a few big films to cover all of their overhead, keep their marketing and sales teams busy, and get people into theaters. Then the success of all the other little films they distribute don’t determine whether the studio makes a profit. Some book publishers work in a similar way. Those imprints are willing to overpay for a sure-thing bestseller for the same reason. They need books every season that Amazon, The Daily Show, and BEA attendees absolutely have to have. They need books that will keep their staffs busy and fixed costs covered.

Plus, the consumers of these books wouldn’t necessarily be buying something else. For many people who buy “tentpole” books, it’s the only book they’ll buy this year.

Tentpoles justify spending half a million or more for books, but several million is a different kettle of fish. So let’s look at the kind of book this is. First, she’s a celebrity. But lots of books by celebrities don’t make the bestseller list. She’s a celebrity famous for writing, however, which means people who follow her actually want her content. (The people who buy a book by Mariano Rivera or Kim Kardashian have very low expectations for what will be in the book.) Plus, she’s a female comedian famous for her writing, which has recently been a formula for enormous success.

Writers earn roughly $3 in royalties for each book sold, so for her book to “earn out,” she’ll have to sell over a million copies. How unusual is that? Only a few nonfiction books a year reach those heights, so it’s a big gamble. But Tina Fey and Mindy Kaling have gotten there, so someone like her selling a million copies has better odds than you might think.

The Importance of Overhead

Dunham’s book doesn’t need to sell a million copies to turn a profit, however, for the same reason Random House can’t sign up one-hundred debut novelists instead of one blockbuster. It has to do with the costs of running an imprint. The financials on a $28 book like Dunham’s work a little like this: The publisher gets $14 a unit from the bookstore. As I said earlier, Dunham’s share of that is about $3, though she gets paid her projected share from day one. That’s why it’s called an advance–she won’t see another dime until the she’s made enough to cover the advance. The direct cost of making each unit is about $2.50. For the average book, you figure $7 will go to overhead, and that leaves the last $1.50 as profit. For the average book, the expected contribution to overhead could be $50,000 to $150,000. That’s why most editors have a minimum number of copies they have to aim for with any book. (At some imprints, that’s 10,000 copies. At others, it’s 25,000 or even 50,000.) Random House can’t sign up a thousand $3,500-advance novels because each of those books has to carry the weight of all that overhead.

For any book that sells hundreds of thousands of copies, the normal formula gets skewed. Unlike with other books, the biggest cost for Dunham is her advance. It’s likely the entire cost of making and selling her book, including an outsized contribution to overhead, is less than $4.5 million. That means they’ll only need to sell maybe 350,000 units to be well into the black.

Who Are We Kidding?

Okay, but let’s be realistic. When you’re talking about an advance under a million dollars, you’re still talking about people using spreadsheets and competitive titles and so forth. But when you’re talking about millions, it’s now about top executives signing off and how they make their decisions. They’re thinking about whether or not they’ll get fired for paying that much, or get fired for NOT paying that much–it can start to be less about how much Random House wants the title, and more about how much they want to make sure Hachette or Simon & Schuster doesn’t get it.