Home
»
Uncategorized
»
The Ploughshares Round-Down: Why Louie Is Like Great Literature 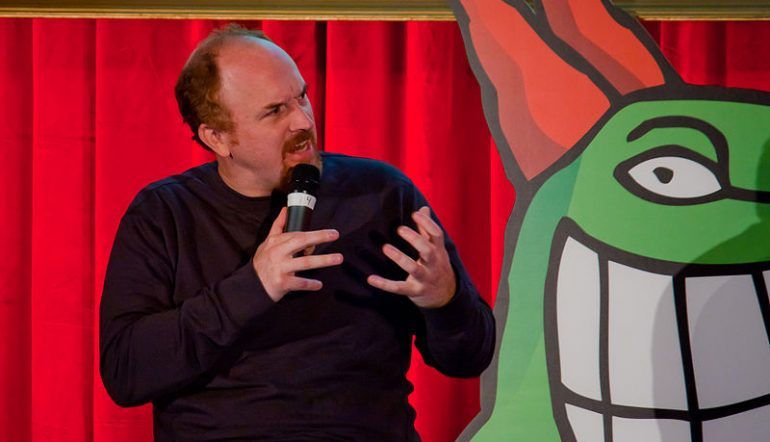 Tasha Golden is on vacation from the blog this week, so covering for her on the Round-Down today is the writer Gila Lyons. Gila’s work has appeared in Salon, The Millions, The Morning News, Tablet, The Forward, The NY Press, The Faster Times, The Berkshire Review, and other publications. She lives in Boston, where she writes and teaches writing. —Andrew Ladd, blog editor

Critics and journalists love to proclaim Louis C.K. the best comedian alive. They have much to say about his sharp wisdom and existential dilemmas—but few have discussed the relevance of his work to writers. Yet the fourth season of Louie, which began last month, has much in common with today’s great writing.

At times Louie is like a Lydia Davis collection, full of odd-shaped stories of varying sizes—some full-length episodes, some tiny three-minute segments. At other times it’s like the punchy vulgar version of Kathleen Norris’ Dakota, whose stand-alone narrative chapters are punctuated with poetic “weather reports,” as Louis’s plot-driven episodes are book-ended with stand-up bits. The material of some episodes are mundane like Evan Connell’s glimpses-of-life novel, Mrs. Bridge—Louis lying in bed eating ice cream watching the news, Louis picking up his daughters from school; some are surrealistic and Kafka-esque—Louis, riding the bus alone on New Year’s Eve, comes face to face with the woman he’s been missing, and as they begin their smiley hellos blood pours from her nose and she dies. Louie is in turns microfiction, magic realism, Avant-garde, lyric essay, short story, and poem. He is Aimee Bender, John D’Agata, Raymond Carver, Samuel Beckett, Lorrie Moore.

Writers and comics are siblings separated at birth. Each steps back, observes, digests, opens themselves, holds a mirror for us to recognize ourselves, or dissects themselves in such a way that we can feel shy life thrumming in our most buried parts. Each reveals, before a crowd of strangers expecting to be entertained, the deepest, most painful, most meaningful, most transcendent thoughts, experiences, anxieties, insecurities and joys. Each must anticipate and then tolerate rejection, ridicule, misinterpretation, and sometimes praise for our version of what the world is and our experience in it. Comedians do what writers do—only they’re funny about it.

At the end of the day I long for escape as much as the next person, but I don’t easily fall into the escapist stories du jour of crime dramas, real housewives, top chefs, or mad men. For me to be able to comfortably suspend my disbelief enough to be entertained, I need to recognize some aspects of real life in what I’m seeing on the tube. There is just enough of real life in even its most outlandish episodes, to which a viewer can attach, as a reader might with fiction or lyric essay.

Louie shows us making pasta with chicken while helping his daughter with her homework; it shows us riding the subway dead-eyed in a car-full of haggard strangers; it shows us coffee shops overrun with skinny-jean-clad, hair-flipping white girls staring at their smart phones. It can satirize these situations and carry them to the point of absurdity like an Ionesco play, but it’s a fiction intricately related to recognizable aspects of daily urban life—the grimaces, the impatience, the filth, the expense, and the exaltation of urban living.

With Louie I don’t have to suspend much disbelief; this is life for one single comedian dad living in New York. And though I’m none of these things, I know what it’s like to be woken by clanging garbage cans being smashed against a garbage truck outside my window at six in the morning, or to be approached by cloying yuppie parents who name their kids “Never,” and “Sir” and want gluten-free screen-less play-dates for their kids—both recent skits in season four. I empathize with the monologues and fantasies the mind invents when stuck in line at the market, in traffic, at the dentist. Louie provides a double satisfaction; it’s an escape into another’s life, and a deeper connection with my own.

Isn’t that what great literature does, too? In telling us a story it makes the water we blindly swim through shimmer, it shows us our world—and our humanity—in a way we understood but hadn’t yet articulated or even noticed. In a GQ article last month which declared C.K. America’s Undisputed King of Comedy, Andrew Corsello writes, “You go to see Louis C.K. to laugh, but also to connect to yourself in a way that’s both alarming and reassuring…Even his mopey interstitial mumbles—‘I don’t know…. I don’t care…. I ate too much and masturbated too recently’—connect you to your own dilapidated humanity.”

I surprised myself last year when, amidst a crowd of trendy hipsters and bespectacled intellectuals, I literally wept when Louis C.K. walked on stage at Boston Symphony Hall. It was as if I were meeting one of my heroes, a long-lost friend, a savior—which I suppose I was. Louis’s humor, his keen observations, his tenderness for his own soft spots as well as those of humanity, has sent me to bed smiling when otherwise I’m sure I’d have worried or cried myself to sleep. A poem or a short story wouldn’t have been immediate balm enough to turn heartache or stress into a good laugh, but the stand-up bits and skits on Louie were like injections for me, vitamin shots that go straight into the bloodstream, when my system was too sluggish or weak to digest and synthesize humor and relief on its own.

It was almost embarrassing to see Louis in the flesh, he whose intonations and eyebrow lifts—whose sensitivities, long-standing battles, and deepest joys—I’d studied and adored like a lover. I wanted to hide my face in the crowd in case somehow all the hours I’d spent laughing with him on my laptop were somehow a two-way mirror and he’d recognize me. By the time I finally saw him live, Louis had appeared in my dreams as hero, entertainer, guardian angel, fiancée, totem of self-acceptance, wisdom, and pain.

I felt a similar familiarity when I recognized the writer Sarah Manguso in line outside a New York City bar several years earlier. I was only a few people behind her, and felt I knew her so well it would be dishonest not to say hello. I had wrapped her words and her thinking around myself so intimately, the comfort and revelation they provided meant so much to me, and I thoroughly embarrassed her by telling her so. She said she’d never been spotted and identified in public before, and I realized that I’d only recognized her because so many times during the course of reading her books, I’d flip to the back to study the author’s photo, to see what a face shaped by her thoughts and experiences would look like.

In her LA Times piece, Louis C.K., holy man, the writer Meghan Daum attributes some of the love we feel for Louis—and, I would argue, for many writers—to “how hungry we are for people who can explain to us what we feel and why we feel it.” Similarly, Steve Almond writes, by way of introduction to Tiny Beautiful Things by Cheryl Strayed, “We need books…because we are all, in the private kingdom of our hearts, desperate for the company of a wise, true friend. Someone who isn’t embarrassed by our emotions or her own.”