Home
»
Authors
»
“The poems toggle between wreckages”: An Interview with Kerrin McCadden

Kerrin McCadden’s poems illuminate life’s sharp-edged particulars, making the touchstones of this physical world resonate with the meditative music of our everyday existence. She’s the author of Landscape with Plywood Silhouettes, winner of the 2015 Vermont Book Award and the 2013 New Issues Poetry Prize, as well as the recipient of an NEA Literature Fellowship. A graduate of The MFA Program for Writers at Warren Wilson College, she teaches English and creative writing at Montpelier High School in Montpelier, Vermont. After being dazzled by two of Kerrin’s poems in The American Poetry Review, I rushed out to buy her book, then quickly reached out to see if I could ask a few questions about her beautiful, startling, unforgettable poems.

Matthew Thorburn: How did Landscape with Plywood Silhouettes come together? Would you talk about your process for putting your poems together as a book manuscript?

Kerrin McCadden: The first time I built this book, it was on the floor of an empty room above an airplane hangar. I called it “The Middle Distance” and promptly sent it out, which probably was an act of great hubris. A day with a pile of poems… and presto? I profited from discovering what would become the book’s central concern through this process: the sudden loneliness of divorce.

My day job is demanding, as is this life in general, so I needed to install scaffolding to help the book demand its own time. I attended the Colrain Manuscript Conference, joined The Grind for a month during the summer, and spent a residency at Vermont Studio Center. I added and cut poems by the tens as I grew to understand them as a book. Toward the end of my time at VSC, I found an empty artist’s studio, bought a pack of push pins, and posted the poems in a circle around the room. I walked and walked and moved and moved them for a number of days. There was enough space to see the book in actual sequence. Very close to the end of the process, maybe a year later, Rodney Jones helped me see to some final excisions and switches. This is how the workmanlike part of building the book happened.

In terms of the actual ordering, in close proximity, I tried to soften my gaze and let poems choose their neighbors. There was inevitable tension in this process—gatherings of kinds of tension. I wanted an emotional/tensional arc rather than a specifically narrative one—and discovered the landscape’s arc, too, along the way. 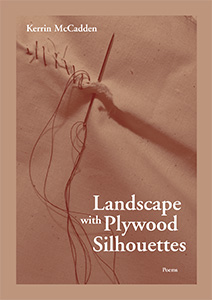 MT: Your poem “Say Sing” seems like the perfect note on which to end your book: it encapsulates so much of what this collection is about, while being propelled by its variations on the title imperative. It calls us to action, calls us to “say,” to call out to our lives. How did this poem start—and more generally, how a poem starts for you?

KM: This question gave me chills when I first read it. This is the only poem in the collection I wrote while I was still married. It’s the oldest poem in the collection. I wrote it quite literally as an imperative to a beloved. So, chronologically, while it ends the book, it is also very much the book’s beginning.

This book claims “landscape” as subject. The landscape of this poem is distinct from all the others, calling out its mountains and fields and wildlife, separate from the village that dominates the rest of the book. For a reader, the poems arrive at this wilder place, but for me, as writer, it’s where the poems, and life, begin. Just before landing there, the poems reach out to other places—Australia, New Hampshire, Russia. I’m fond of this flailing—of reaching out to other places before landing at “Say Sing.” I almost can’t even bear to look at that poem. When I placed it last, I knew it was the last poem, and it never moved. In a way, I love that this quite desperate poem is transformed through the company of the other poems.

MT: I was interested to note in your bio that you’re a high school teacher. How does your work at Montpelier High School influence your work as a poet—and vice versa?

KM: I began my career at Montpelier High School when I was 26 years old, so almost everything in my adult life I’ve learned through the lens of my work at that very fine school. It’s a vibrant, respectful, intellectually grounded, exciting place to be a person with ideas. MHS is a rare and sustaining institution.

As a high school teacher, I get—and this is primary—to keep honing what I know. To whittle complicated notions down to fine enough points for developing young people to understand is to know one’s field deeply. There is very little difference between a college student and a high school student, if you let there be none.

KM: I have a second collection that is maybe three-quarters finished. I’ve been saying its working title is Street View, but maybe that is shifting. While my first collection circled around the figurative destruction of a single home, this second collection is about a kind of home-going. I’ve been going back to Ireland in the recent decade for the first time in my life. I spend time with my cousins, who are relatively new to me. I visit my grandparents’ and great grandparents’ ruined homes—all within a mile of each other. The poems toggle between wreckages, and their speaker is often a kind of explorer, sometimes on the moon, sometimes in Donegal, sometimes in Vermont, Siberia. The poems are somewhat less hospitable and the speaker definitely more home-less.

KM: Anna Journey’s If Birds Gather Your Hair for Nesting blew me away a few weeks back. The specific lushness of her language and vision forge what feels like a dark dreamscape, and while I was in it, I didn’t want to wake up.

I just bought a new house last week, and as I was packing, I was reading Mary Jo Bang’s The Last Two Seconds. Sometimes a book of poems shows up like a prayer book or an instruction manual. I was stopped dead by “A Structure of Repeating Units.” This poem seemed prescient by its last two lines: “Just wait and the world will come back. / The terror I have, I keep hidden.”

Read a few poems from Landscape with Plywood Silhouettes here.