Home
»
Critical Essays
»
The Poet and the News 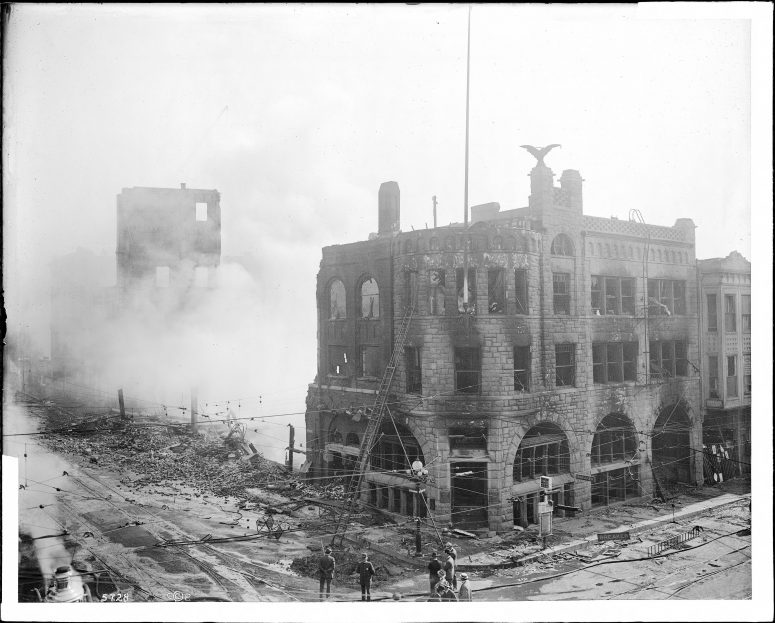 Photograph of the Los Angeles Times building, after the bombing disaster on October 1, 1910.

Most nights I climb into bed and perform one last scroll through social media to catch up on the end-of-day news, but here lately, I’m beginning to think I need to lose this habit, else it wreck my sleep and, therefore, my mental health. Just in the last two weeks, I’ve tossed and turned, bathed in the blue-glow of my iPhone, while reading about the Grenfell Tower fire, the shooting at congressional softball practice, a shooting at a San Francisco UPS, bombings in Syria, the waived conviction of the Minnesota police officer who murdered Philando Castile, the mistrial of the Bill Cosby sexual assault case, our president hiring a personal lawyer who’s hired a personal lawyer, the forest fires in Portugal, the Finsbury Park attack, the murder of 17-year-old Nabra Hassanen who was walking to her mosque for Ramadan prayers, and the murder of Charleena Lyles by the Seattle Police Department who responded to her 911 call. My dreams echo details of the violent events and rhetoric on which the news reports, if I can fall asleep at all. More than ever, I seem to imbibe the news, allow it to become a part of me, choke my obsessive subconscious like invasive kudzu. No wonder then that I feel tempted to write about these events and their consequences, their undeniable effect on me and my day-to-day. Still, in writing, I’m wary to over-reach, to take through my empathy the experiences of the victims and communities directly affected by violent action that I only read about on my smartphone, in my comfortable bed, on my quiet street in small-town New Jersey. I recognize that the events are not my story to tell, and my authority is only that of a removed viewer—I can’t bring myself to say witness here—feeling distant vibrations on our sticky web of humanity.

In Tom Sleigh’s “House of Fact, House of Ruin,” there’s a wonderful turn in which the speaker, somewhat self-deprecatorily, acknowledges his lack of authority: “Honestly, when I look at life straight, / I’m just another blind Brooklynite.” The poem reasons that this limitation is due to the fact that he can’t imagine himself dead, “can’t see my illiterate skeleton…that will outlive me.” These lines, however, remain relevant to our necessary consideration of how privilege (racial, gendered, religious, economic, or elsewise) and personal safety factor into the poet’s ethos, especially when taking on the subject of violence elsewhere and victimhood that’s not one’s own. Yes, empathy can approximate to some degree the experiences of others. Perhaps. But empathy can also dangerously appropriate, erase, and even further traumatize. Whose story is it? Who am I to think I can speak for others? Whatever I entails, I’m okay with the fact that I don’t need to write about everything, that I can’t (and don’t want) to be an oracle for our moment. Honestly, when I look at life straight, I’m just a poet, which means I’m just a human who should, if I’m doing it right, be able to listen, and listen again, and listen some more.

“Sorrow everywhere. Slaughter everywhere,” the (mostly) beloved Jack Gilbert begins his “A Brief for the Defense,” a piece that my social-media hivemind still mentioned several times when I asked for problematic examples of poems that deal with others’ pain. The poem’s presumably in persona—a privileged collective who use the suffering of others to justify their own righteousness. The speakers shrug: “If babies / are not starving someplace, they are starving / somewhere else. With flies in their nostrils.” And then the justification, sneeringly, comes: “But we enjoy our lives because that’s what God wants. / Otherwise the mornings before summer dawn would not / be made so fine.” The suffering of others sweetens our pleasure, or else the speakers, overwhelmed by the prevalence of tragic news, overcompensate in their attempt to convince themselves of the value of self-care. I have mixed feelings about the poem, for I see it initially as utter and searing satire—and yet, by the end of the poem, I’m not so sure.

About halfway through, the poem turns (perhaps, almost, maybe) sincere, insisting that “We must risk delight,” that:

We can do without pleasure,
but not delight. Not enjoyment. We must have
the stubbornness to accept our gladness in the ruthless
furnace of this world. To make injustice the only
measure of our attention is to praise the Devil.

The initial coldness yields to a kind of rallying praise, a call for self-fortitude: We must have the stubbornness to accept our gladness in the ruthless furnace of the world. We must find a way to enjoy, to live, the speakers seem to say, and, in doing so, we have to, to some extent, reject the suffering of others. Is this a poem against sympathy, or a poem about self-care? What kind of privilege does a speaker of a poem like this enjoy?

Gilbert’s poem reminds me somewhat of Mary Karr’s “The Burning Girl” in which the speaker goes on about her vacation while a girl dies, either literally or figuratively:

While the ruby sun fell
From a cloud’s bent claws and Wimbledon was won
And lost, we sprawled along the shore in chairs,
We breathed the azure airs alongside
A girl with the thinnest arms all scarred and scored
With marks she’d made herself —
She sat with us in flames
That not all saw or saw but couldn’t say at risk
Of seeming impolite.

Karr’s speaker goes onto say that the girl “touched / No aspect of our silly lives” although, later, she aggrandizes her death, saying that “She was the flaming tower we all dared // To jump from.” The suffering of the girl becomes a sounding board for the speaker’s own, unafflicted selfhood—a self-portrait in un-tender relief. The poem’s perhaps then about the failings of empathy, the almost gravitational draw of life and its minutiae in the orbit of someone else’s suffering. I can’t help but wonder how Wislawa Szymborska would have handled the subject, what with that striking end to her poem “Photograph from September 11” in which she declares that, as a poet, she “can do only two things for them— / describe this flight / and not add a last line,” an assertion that has alternately been praised for its insistence that poet’s should neither editorialize tragedy nor navel-gaze in the midst of violence, as well as criticized for its unwillingness to memorialize the victims beyond their gruesome deaths. This latter reaction to Szymborska’s poem asks us to consider whether or not, in the act of writing about violence against others, we actually re-perform the act of violence. For instance, at what point does a male writer who obsessively writes about the grisly murders of young women effectuate that violence in his own mind and, by proxy, in the minds of his readers? To what effect? Does a white man appropriating the autopsy of a black, teenage boy murdered by police and then reorganizing it so that it ends on the description of the boy’s genitalia perform more violence against the boy while also re-traumatizing his family and community, not to mention other persons who are victims of hate-rhetoric and hate-crimes, police brutality and systemic racism? I hope we can all agree on the answer here.

The poet who enjoys some privilege and personal safety risks many things when writing about the violence rendered on others, not least of which are the offenses of 1) using the tragedy as a tone-deaf sounding board for the self, or 2) removing the self entirely so as to subsume and appropriate the experience of others, as Elizabeth Bishop perhaps warns in (the not-unproblematic) “In Waiting Room” when she says, “I scarcely dared to look / to see what it was I was.” So how’s one to proceed, wracked and concerned by the news? Is poetry the place for my action? These are questions with which I’m reckoning these days, and I have no easy answers, if I have any answers at all. Perhaps it’s best then that I leave this question for now with another writer, Susan Sontag in Regarding the Pain of Others:

Compassion is an unstable emotion. It needs to be translated into action, or it withers….The imaginary proximity to the suffering inflicted on others that is granted by images suggests a link between the faraway sufferers—seen close-up on the television screen—and the privileged viewer that is simply untrue, that is yet one more mystification of our real relations to power. So far as we feel sympathy, we feel we are not accomplices to what caused the suffering. Our sympathy proclaims our innocence as well as our impotence. To that extent, it can be (for all our good intentions) an impertinent—if not an inappropriate—response. To set aside the sympathy we extend to others beset by war and murderous politics for a reflection on how our privileges are located on the same map as their suffering, and may—in ways we might prefer not to imagine—be linked to their suffering, as the wealth of some may imply the destitution of others, is a task for which the painful, stirring images supply only an initial spark.