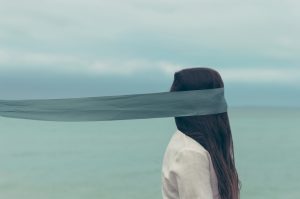 Perhaps it’s paradoxical to want to define bewilderment, much less bewilderment as a poetics, given that the word generally refers to a state of confusion, an unmooring from the resolute signifiers that compose our comfortable, if not tidal and illusory, understanding of reality. Recently, however, when I asked if some readers of poetry preferred to be grounded or bewildered by a poem, their responses did not illuminate an overwhelming preference so much as a clear discrepancy between their individual understandings of what bewilderment means for and within a poem. Bewilderment about bewilderment abounds, it seems. Some equated the notion of bewilderment with being confused by the poet, something I often attach to the elliptical aesthetic, whereas others recognized bewilderment as a kind of sublime state, one of intense awe that allows for the ineffable and unanswerable. This latter understanding is the one I had in mind in my poorly worded and contextualized question, as it most clearly recalls Fanny Howe’s writings on bewilderment.

The first time I encountered bewilderment in relationship to poetry was in an excerpt from a 1998 lecture by Fanny Howe, which is, as far as I know, the origin for the idea of a bewilderment poetics, although the movement certainly has connections to earlier traditions including religious mysticism and literary Romanticism. Howe sees bewilderment as a way or practice of living and seems to argue that the approach to living cannot be separated from one’s poetics, at least for the poet; bewilderment is both “a poetics and an ethics,” “a way of entering the day as much as the work.” The lecture itself is intriguingly bewildering, with many unexpected leaps and micro-meditations that collage together to, at last, form a manifestic argument. “A signal,” by which she might mean anything from a poem to a flare to a footprint, “does not necessarily mean that you want to be located or described. It can mean that you want to be known as Unlocatable and Hidden,” she writes. Howe’s desire to become “unlocatable,” both in the world and through a poem, offers a poetics antecedent to the meditations in Rebecca Solnit’s A Field Guide to Getting Lost, in which the essayist writes:

To lose yourself: a voluptuous surrender, lost in your arms, lost to the world, utterly immersed in what is present so that its surroundings fade away. In [Walter] Benjamin’s terms, to be lost is to be fully present, and to be fully present is to be capable of being in uncertainty and mystery.

Howe might agree with Solnit and Benjamin: to be lost is to be fully present. To be bewildered is to have the senses confused so much so that they are fully heightened, alive. Here, we might look to Richard Hugo’s concept of the “triggering town,” an analogy that positions the poet approaching their craft as a person approaching familiar and unfamiliar places:

The poem is always in your hometown, but you have a better chance of finding it in another […] the stable set of knowns that the poem needs to anchor on is less stable at home than in the town you’ve just seen for the first time […] if you need knowns that the [strange] town does not provide, no trivial concerns such as loyalty to truth, a nagging consideration had you stayed home, stand in the way of your introducing them as needed by the poem. It is easy to turn the gas station attendant into a drunk. Back home it would have been difficult because he had a drinking problem.

The unfamiliar town allows one to wonder, to invent, to explore, whereas the familiar town drags an anchor of fact. The poet Kaveh Akbar, in a recent interview with LitHub, has also spoken of bewilderment as a feeling of wonder, of possibility, something perhaps closer to the ecstatic sublime than fraught confusion:

I really do sincerely feel that bewilderment is at the core of every great poem, and in order to be bewildered, you have to be able to wonder. You absolutely have to be permeable to wonder. Maintaining an orientation towards wonder in a time where the government is conspiring against it, in a time where black people are being murdered at the hands of the state, in a time when the Earth is very much trying to warn us about what we’re doing to it, maintaining an orientation towards wonder becomes really difficult. It’s the work that I have to do every day, the work of trying to find sources of wonder, even in our sadness and loneliness, or even in our anger.

For Akbar, bewilderment doesn’t mean happiness; it can be resistance, a protest against the complacency, or even erasure and violence experienced in reality. It allows the poem to have an unknown, but soon discovered, emotional effect on you as either the poet or the reader. It doesn’t set out into the world with set expectations, only a hot, molten glass globe of hope inside one’s chest. It’s a surrender that maintains agency.

So how does one render bewilderment in a poem? Howe may have the answer. She cites a poem’s sound as one driving force (and, here, I can’t help but think of Gerard Manley Hopkins’s bewildering sprung rhythm, developed in English out of the Welsh metric cynghanedd), but Howe also speaks at a more macro level about bewilderment:

In the Dictionary, to bewilder is ‘to cause to lose one’s sense of where one is.’

The wilderness as metaphor is in this case not evocative enough because causing a complete failure in the magnet, the compass, the scale, the stars and the movement of the rivers is more than getting lost in the woods.

Bewilderment is an enchantment that follows a complete collapse of reference and reconcilability.

It cracks open the dialectic and sees myriads all at once.

Language, whether through sound or syntax or metaphor or sense, allows for reference and its reconcilability, as well as the loss of reference and reconcilability. It can overwhelm, or it can calm. It can move toward answer and question, clarity or confusion. Indeed, a word estranges the object it signifies from its thingness, its actuality, so that a poem is the landscape translated into a field of bewilderment, a moor over which one wanders lost but not without one’s senses, fully present, looking and seeing everything in all its strangeness.