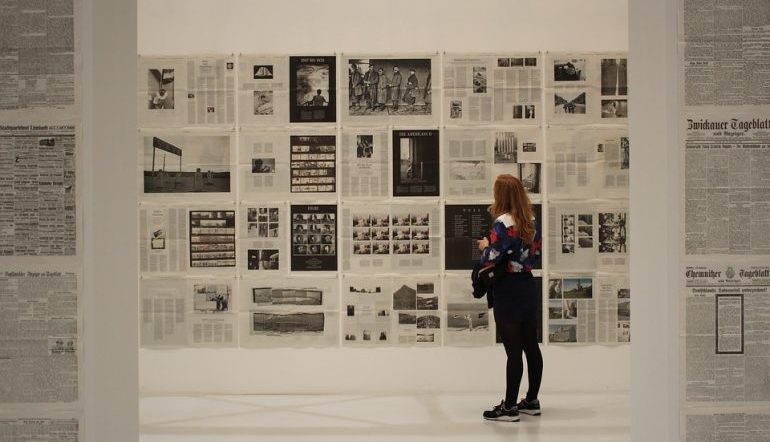 Whenever I go to an art exhibit, at a museum or a gallery, I always read the artist statement. This short written text, found on the wall near the art or in the show catalog, is an easily parodied document—you can use this generator online to spew just the right abstraction and jargon—but, at its best, it serves as a manifesto. It offers a glimpse into an artist’s way of seeing, into what they feel art is for, what it can do.

If there is an equivalent of the artist’s statement in poetry, it’s the ars poetica. Latin for “the art of poetry,” the ars poetica shows up as early as Horace, in 19 BC, and most poets since, it seems, have written at least one. They’ve become a love-em-or-hate-em genre, with those falling in the “hate-em” camp pointing to their meta nature as insular, gimmicky, or narcissistic. But I never get tired of reading ars poetica poems. While also serving as vehicles of dazzling metaphor, they, like artist statements, show readers different ways of understanding how poetry can make meaning.

Many artist statements also give us origin stories: how someone came to be interested in a particular subject, or how they came to art in the first place. Dana Levin’s poem “Ars Poetica (cocoons)” is of this ilk, but instead of rehearsing a familiar portrait of the artist as a young person, Levin takes the risk of using butterflies as a metaphor for the poet’s transformation.

But the haunted, frankly horrifying nature of the poem turn readerly expectations inside out:

clinging to the back of your throat—

you could feel their gold wings trembling.

You were alarmed. You felt infested.

In the downstairs bathroom of the family home,

gagging to spit them out—

and a voice saying Don’t, don’t—

Like a classic alien movie, this poem’s beginning makes us feel the visceral nature of those cocoons in the throat, the body overtaken by something organic, but completely other. There are multiple clues that this nascent infestation is happening to an adolescent. The fact that the butterflies themselves are still metamorphosing is important—they are not yet the monarchs they will become—and the detail of “the downstairs bathroom of the family home” makes it seem likely that the speaker is a young person still living with their parents. The poetic impulse here verges on the terrifying, but when the speaker’s impulse is to cough up the cocoons, to rid her throat of them, something—“a voice”—holds her back. Like a superhero story, “Ars Poetica (cocoons)” ultimately suggests that poetry is not something one does, but something one is.

Terrance Hayes’s “Ars Poetica with Bacon” takes a different approach. Structured as a parable, the prose poem recounts the story of a guide leading a refugee family across a war-torn landscape, coming upon a pig at the moment that they begin to worry about their “diminishing food supply.” But though the story is set up for the reader to expect the clear symbolism so often found in parables, Hayes’s story slips out of neat meanings. The family the guide leads frequently blurs in the speaker’s thoughts with his own family: the quarreling parents become his quarreling parents, while their discussion, “about cause and effect: who’d harmed whom first” becomes the swirling core around which the rest of the poem coheres. The poem offers questions: Is the poet ultimately the guide in the dark? If so, in the night, he admits “there was no telling what might be rooting in the soil.” Is the poet perhaps the pig itself, curiously chasing an object in the undergrowth, “no heavier than an orphan,” a “single-minded soul” that winds up ultimately offering the family sustenance? There are no clear answers; poetry offers few, anyway. But Hayes’s manifesto asserts that poetry is what helps us to see the interconnectedness of the things of the world: its hunger, its quarrels, its searching and longing, and its families, held together so precariously, in a landscape both hostile and lovely.

Finally, Dorothea Lasky’s “Ars Poetica” is the kind of all-encompassing ars poetica that blends together artist manifesto with a guide for life itself. Lasky’s dynamic, freewheeling energy creates a sense of giddiness, underscored by the poem’s humor. It begins, “I wanted to tell the veterinary assistant about the cat video Jason sent me / But I resisted for fear she’d think it strange / I am very lonely.” The loneliness stems in part, we learn, from a recent breakup. When the speaker’s ex calls her, drunk, to inform her that her “life’s work was the work of the elite.” The speaker then wrestles with this notion—familiar to most poets, I would guess—that poetry, to quote Auden, “makes nothing happen”:

I say I want to save the world but really

I want to write poems all day

I want my face to be a poem

I have just learned how to apply

If the ars poetica is a manifesto, then Lasky’s suggests that poetry is all-encompassing, a way of recording, of witnessing, even if that means something as quotidian as a cat video. We see this, too, in the fact that the speaker wants her “face to be a poem” and semi-literally widens her own vision through the combination of that line and the cheeky remark about eyeliner. By the poem’s end, the speaker is crafting a retort to the drunk ex-boyfriend in her mind; he believes she is no good, but “goodness is not the point anymore / Holding on to things / Now that’s the point.” Poems may not save the world, but they help us hold on to things. I don’t think Lasky’s poem pretends that this is a necessarily transcendent urge. Like Hayes’s guide, the speaker may not always like what she is holding on to, but the act itself is what matters.

All three of these ars poetica poems are far more complicated than Horace’s original didactic guide to writing. Rather than tell us how poetry should be written, they hint, often through their wild metaphors, at what the poet thinks the role of poetry could be, at why poems matters to the individual, to the family, to the world beyond.