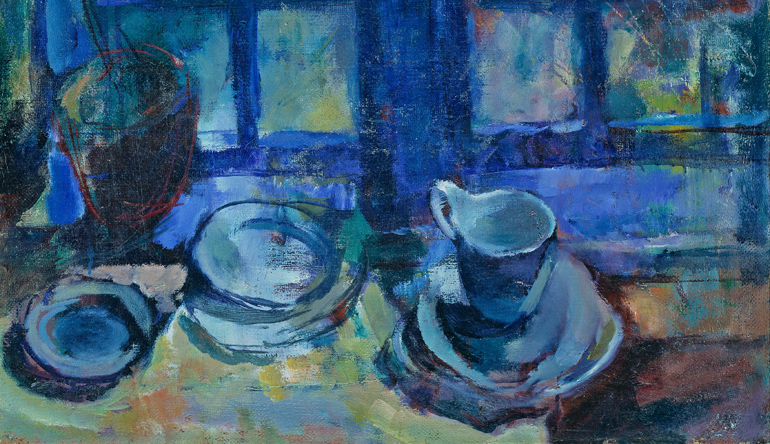 Picasso’s blue period lasted three years. In 1901, a close friend of his killed himself, and the painter sunk into a serious depression, one that was to last until 1904. During this time, he painted virtually nothing but monochromatic pieces in blues and greens, usually of melancholy or impoverished figures. In my freshman year of college, in a darkened classroom in Art History 101, I learned a bit of color theory, including the notion of cool and warm colors. Cool colors in a painting, like blue, seem to recede; warm colors are foregrounded, hitting the eye first. This also seems to match their symbolic properties, with warm colors evoking dynamism, passion, intensity, and cool colors suggesting distance, restraint, calm. As a young poet, I wondered if this idea could be transferred to poetry. There were many ways, surely, for poets to suggest sadness or calm aside from merely the subject matter. Could the idea of a poet’s palette be pushed further—could poets work visually on the page without color to achieve some of the same effects that color would?

Take Jean Valentine, who can be the living embodiment of Picasso’s blue period. In a poem like “Happiness (2): The I Ching,” Valentine’s techniques begin with creating silence and stillness through the use of white space, punctuation, and typography. A majority of Valentine’s stanzas consist of single word lines—the poetic equivalent of a chime or a gong, in which one note sounds and is meant to resonate. Like a room painted blue, the poem seems larger than it is as each word’s possibilities, and what is unsaid, expand to fill the empty spaces.

The first line seems to be an assertion of the speaker’s position: “(Alone).” Since the word is not part of a sentence and nothing has yet come before it in the poem, parentheses act as an overemphasis; normal parentheses act to set words apart from their sentence or paragraph, but since they commence the poem, they seem to be fiercely guarding the solitude of whoever is alone within them. We then get a series of lines presenting one noun, one image: “Sunset / sunrise / pines / hermit thrush.” Each detail of the natural environment is presented carefully, one by one, unfold slowly, a sort of visual savoring of perception. Nothing is hierarchized.

Suddenly, “misfortune” intrudes upon this pastoral, heralded by a violent dash. The shift is immediate and takes to a new place in the speaker’s understanding of happiness: “—Misfortune. No blame.” The dash drives into the word like an arrow. The reader would be justified in wondering if heat is now going to seep into the poem; this is Valentine’s dash of red. But the misfortune is self-contained and ends conclusively with the period, the only one of the poem. But Valentine returns us to nature with another dash introducing the penultimate stanza: the speaker sees “the boat pond” which “rises / above the trees.” Another pause, doubled down upon by a line break and a stanza break. Then we slide into the poem’s ending with a colon. Normally, a colon is used in a sentence to introduce an explanation, an example or a series, so placing it before the final lines cues the reader that all the definitions that have come before these lines have been setting up the final stanza as the poem’s concluding argument. It opens a door.

“: the dead don’t go away,” the speaker tells us. Then the final line, beginning with another colon. The line is another consisting of just one word, a single syllable: you. This is followed by a set of quotation marks under each of the words from the line before. This, of course, is shorthand; one uses this type of notation to indicate that the words replaced by quotation marks are exactly the same as the words above it. Written out, then, the lines would read, “: the dead don’t go away / : you don’t go away.” But Valentine’s unconventional use of typography and punctuation cause language to recede, to swallow itself in what is unutterable. Not repeating the words and merely suggesting them with quotes produces an overwhelming visual and emotional absence.

What kind of elegy is this, then? If the colons introduce us to the final lines as an illuminating example, what do they exemplify? Is it that happiness is possible because we are never without the memory of those who are gone? Or does this knowledge make such happiness impossible? Valentine is rarely so easily deciphered. But whatever its rhetorical thrust, it is clearly a portrait like Chagall’s blue lovers that float through so many of his paintings, with Valentine’s use of white space, omission, punctuation, and line standing in for the painter’s azure, cerulean, and turquoise.

Tags:Happiness (2): The I Ching, Jean Valentine