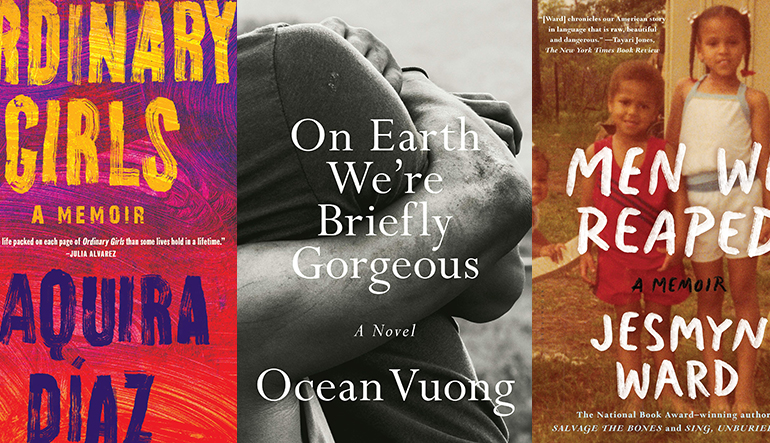 A few years ago, my parents moved from my childhood home. They’ve moved a couple of times since then, twice across state lines. In the process, they sold my tall twin white childhood bookshelves that I had lined two rows deep with books, so many that I never had space to decorate my shelves with knickknacks, so many that my books even overflowed into plastic bins I kept under my bed. The books themselves, though, remained, and in their new homes they sat in cardboard boxes in my parents’ garage. As they downsized, my parents urged me to pare down. I lived thousands of miles away, and, after all, when would I ever read these books again?

I’m notorious in my family for holding onto books, and as I faced the novels, most of which I had only ever read once, a decade and a half ago or more, I still found it difficult to part with any of them. Years later, it was still easy for me to be cocooned in their stories. Stories of trekking across the American prairie with Caddie Woodlawn and May Amelia, voyaging on the Atlantic with Patience Goodspeed, or visiting the Chicago World’s Fair with Rosie Beckett. I could be a housemaid, a survivor of war, a delinquent teen, the daughter of a Gold Rush miner.

I loved my books even if I’d never read them again because I loved what they’d given me: lives so unlike my own in times and places I could only experience through story. I learned to read at six, the same year I wrote my first story, which my teacher Mrs. Gregory laminated into a book, its binding stitched by hand. But while reading and writing provided me with easy escape, they were a privilege, although I didn’t realize that at the time.

“I spent my first five years in America surrounded, inundated, by the Vietnamese language,” Ocean Vuong writes in his essay “Surrendering,” published in the New Yorker in 2016. “When I entered kindergarten, I was, in a sense, immigrating all over again, except this time into English.” For Vuong, who quickly became fluent only in speech, reading and writing weren’t easy—particularly since he was “an E.S.L. student from a family of illiterate rice farmers, who saw reading as snobby, or worse.” As Vuong sank in the mire of becoming literate, his family viewed literacy with “suspicion and doubt.” Vuong’s teacher took a dim view of him and his abilities, accusing Vuong of plagiarizing when he “decided to be dangerously ambitious. Which is to say, [he] decided to write a poem.”

The moment that crushes me most in “Surrendering” is when Vuong’s teacher, in pursuit of finding the poem he thinks Vuong plagiarized, tips Vuong’s desk toward him. “I watched as the contents spilled from the cubby’s mouth: rectangle pink erasers, crayons, yellow pencils, wrinkled work sheets where dotted letters were filled in, a lime Dum Dum lollipop. But no poem,” Vuong says. “I stood before the rubble at my feet,” he continues. “Little moments of ice hurled themselves against the window as the boys and girls, my peers, stared, their faces as unconvinced as blank sheets of paper.” This moment, chock-full of colors, the objects of childhood, and poetic language, slows Vuong’s narrative way down. The effect to an outsider, an onlooker, is the feeling of horror. While Vuong may have felt some horror too, he also burned with the shame of having his illiteracy so cruelly exposed in front of his classmates.

Of course, looking back, it’s easy for us to think about his teacher: Look who showed him. Vuong’s 2016 debut poetry collection Night Sky with Exit Wounds won the T.S. Eliot Prize, a Lambda Literary Award, and a Whiting Award—all garnered when Vuong was 28 years old. His novel, On Earth We’re Briefly Gorgeous, published this year, has also been met with acclaim. Still, Vuong reminds us that literacy and storytelling are not mutually exclusive, although the ability to read and write often dominates in our culture. He writes in “Surrendering,” “Of course, not being able to read does not mean that one is empty of stories.”

Yet for his teacher’s sake, for acceptance—and even, likely, for himself—Vuong yields something by putting pen to paper. “The paper a white flag,” he asserts. “I had surrendered, had written…I had pressed my world onto paper. As such, I was a fraud in a field of language, which is to say, I was a writer. I have plagiarized my life to give you the best of me.” When I teach this essay, my students always dwell on this, the work’s ending—unsurprising given how much we emphasize the consequences of plagiarism and the negative connotation it holds. Vuong’s ending catches me, too, taking me aback every time I read it. He plagiarizes his life for his teacher, but the reader, “you,” is implicated as well. How is writing oneself plagiarism? Why must Vuong plagiarize himself to surrender? If writing is expected of us and easy for us, is it still plagiarism and surrender?

For some, writing and reading is born out of necessity. Both Jaquira Diaz and Jesmyn Ward write about how reading became essential for escaping their home lives in childhood and adolescence. “I think my love for books sprang from my need to escape the world I was born into, to slide into another where words were straightforward and honest, where there was clearly delineated good and evil,” Ward notes in her 2013 memoir, Men We Reaped. “And yet, even during all the turbulence of my adolescence, one thing remained constant: I was a kid who loved to read. As cynical and angry as I was, I still believed that books were important, believed in their magic and their power.” Anger drove Ward to other worlds with protagonists she could look up to.

The worlds of novels and the girls they’re about sustained Ward. These worlds were easier than “a world that would not explain anything to [her], where [she] could not delineate good and bad.” These worlds were presence where hers was absence. The girls she found within “were strong and smart and creative and foolish enough to fight dragons, to run away from home to live in museums, to become child spies, to make new friends and build secret gardens.” Bridge to Terabithia, for example, inspired her to create a world for herself and her little brother and cousin. She named it “Kidsland,” although she found the name less magical than Terabithia. “[I]t’s our land. Our kingdom,” she told the boys, cultivating agency. “I’d taken the first step to doing something momentous, to becoming one of those girls in the books I read.” Ward did move on to momentous things, creating worlds of her own in her two National Book Award winning novels, Salvage the Bones and Sing, Unburied, Sing.

As an adolescent, Diaz was filled with anger, too, and books became lifesaving when she found herself in them. “I was the lost kid of an absentee father and an addict mother, being raised by an elderly grandmother who had no clue how to deal with my explosive anger or my recklessness or my drug use or my drinking,” Diaz says in her essay “Girl Hood: On (Not) Finding Yourself in Books.” She turned to her favorite books “again and again, gave [her]self to them entirely.”

As an adult, she realized, “I needed to know that I mattered to someone, that I wasn’t invisible.” Yet unsurprisingly, the books she was exposed to early on—To Kill a Mockingbird and The Catcher in the Rye, for example—didn’t contain kids like her: an angry, reckless, queer Latina wrestling with her identity and the need to be seen in a landscape of drugs and absent parents and violence. It was Junot Diaz’s Drown that made Jaquira Diaz truly feel understood for the first time. Gaining, finally, a sense of empowerment, Diaz set out to write “for the girl [she] was…in hopes that the story will find” girls like her, “and that they will find themselves in the story and not feel so alone.” This month, Diaz is publishing the debut novel that resulted from this mission: Ordinary Girls.

For Vuong, Ward, and Diaz, reading and writing became necessities early on when their classrooms, families, and streets confined them, left them feeling othered and uncertain of their identities. At first, “reading,” or at least the illusion of reading, protected Vuong from the taunts of his peers—then writing became risk. Books motivated Ward and Diaz to create their own worlds in order to survive, to help others survive, too. Reading and writing gave them refuge and became the forces that propelled them into lives they could inhabit, finally.