Home
»
Uncategorized
»
The Power of Suggestion: My First Time with D.H.Lawrence

Having grown up within various loops of the Bible belt, sex was not often a topic of conversation during my childhood—unless it was in the state-mandated sex ed class in fifth-grade (traumatic!), or the late-night whispers of slumber parties (distraction while someone’s bra was getting frozen). Had the idea of sensuality ever been mentioned, it probably would have been even more taboo.

College, however, turned things upside down, bringing in new ideas and people. Among them was a boy who sent me a Galway Kinnell poem and asked if I thought sensuality was impossible.

I never had an answer for him.

Perhaps it was because I’d never read D.H. Lawrence—even though, as a respectable English major, I’d often heard his name tossed around in reference to all of those ideas. His work, I knew, like much literature, had been more comfortable than the culture around it in addressing sex and love, eros and sensuality. Yet even after I got that unanswerable question, it took me more than a decade and this self-inflicted challenge to actually read Lawrence’s work.

Lawrence’s 1913 semi-autobiographical novel Sons and Lovers deals with the complicated relationship between mother and son, and the son and his lovers. Lawrence began the novel shortly after his own mother died, and ended up rewriting it several times—and in his explanation of its premise to his friend and editor Edward Garnett, it’s clear that his vision for the work was much higher than the “perversion” label that some critics of the time gave it:

These sons are urged into life by their reciprocal love for their mother–urged on and on. But then they come to manhood, they can’t love because their mother is the strongest power in their lives and holds them…. William gave his sex to a fribble and his mother holds his soul. But they spin because he doesn’t know where he is. The next son gets a woman who fights for his soul, fights his mother. The son loves the mother, all the sons hate and are jealous of father. The battle goes on between the mother and the girl, with son as object. The mother gradually proves stronger because of the tie of blood. The son decides to leave his soul in his mother’s hand and like his elder brother, goes for passion. He gets passion then the split begins to fell again. 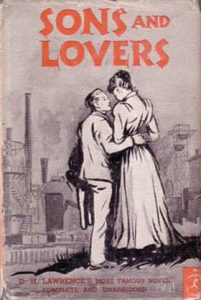 In his lifetime, Lawrence was extremely controversial. But he’s no E.L. James. His view of sex and the sensual was deeply connected to life itself. In Sons and Lovers, Paul Morel grows from an infant into a twenty-something (a journey I cringe to remember for myself). In one of many such scenes, we watch Paul battle his desires while at the opera with a beloved:

And he was to sit all the evening beside her beautiful naked arm, watching the strong throat rise from the strong chest, watching the breasts under the green stuff [her dress fabric], the curve of her limbs in the tight dress. Something in him hated her again for submitting him to this torture already… A kind of eternal look about her, as if she were a wistful sphinx, made it necessary for him to kiss her. He dropped his programme, and crouched down on the floor to get it so that he could kiss her hand and wrist.

Midway through the novel, I remembered that boy from college. I’m not sure if this sensual moment in a one-hundred-year-old imagined opera box would make him feel better or worse. I think what he was really asking all those years ago was this: in an age where we can practically say anything, do we understand the power of the hint?

When I think about the things that move me most—whether that’s terror, humor, the poignant or the sensual, it’s what is suggested that carries the most power. That, often, is the hardest way to write. But D.H. Lawrence? That man wrote it. And now, when I happen a glance at the inside of my wrist, there is something inherently sensual in the twining blue veins just beneath the skin.