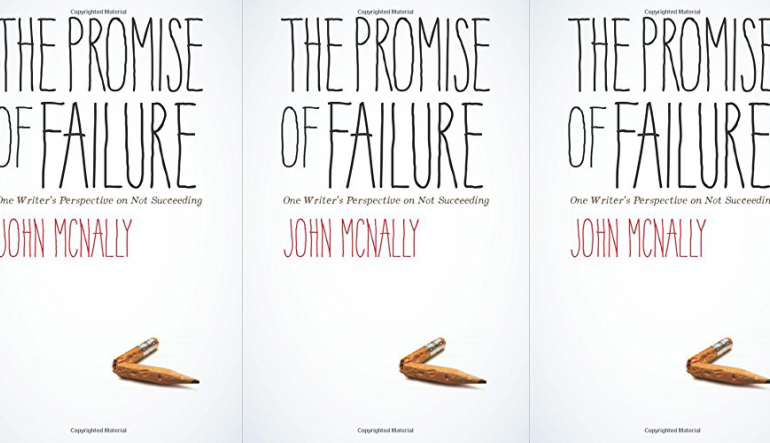 The writing life is not a predictable, mappable one, and creative writers never know which projects will bear fruit, or when, as John McNally generously illustrates in his short collection of essays The Promise of Failure. McNally is a kind companion who mines his own seasons of discouragement to offer others reasons to persist.

He begins with the phenomenon of Facebook, a place where writers daily, or even hourly, watch other writers announce new publications, awards, and prizes. “We are inclined to use other people’s careers as markers for where we feel we should be, even though we know deep down that this is a logical fallacy,” he writes in the first essay, “Rejection, Failure, and the Bigger Picture.” The essays in this book were first given as lectures at the low-residency MFA program at Pacific University, where he teaches.

McNally found that in the hall of mirrors that is Facebook, failure is an infrequent, perhaps taboo, topic. A few years ago, he posted a list of his own books that failed to launch—books that were finished, even represented by an agent, but never published. The books that almost made it. The ones that finally did.

10 Novel. Rejected. Year completed: 2013. 2 years to research, then 5 years to write. At the moment, I’m considering a radical rewrite of this novel, but in its present form, it has been rejected by every major commercial publishing house.

The responses to this update showed him he’d hit a chord—people wanted to share their failures, too, both experienced writers and newer ones, and it got him thinking about failure as an essential element of craft. A book that fails in one form may succeed in another after a gestation period and radical revisions. Failure doesn’t end a career if it is followed by persistence and patience.

It’s his third book on the craft of writing from the University of Iowa Press—the first two were The Creative Writer’s Survival Guide and Vivid and Continuous: Essays and Exercises for Writing Fiction. He strikes a kindly, confiding tone in these essays as he did in the writing books that preceded it, a genre set apart from his other successes, a total of seventeen books as a writer and editor, the most recent of which being an essay collection, The Boy Who Really, Really Wanted to Have Sex: The Memoir of a Fat Kid.

In the second essay of The Promise of Failure, “Prepared Spirits: Author Stakes and Risking Failure,” McNally describes how he hit upon the essence of revision. He describes the difference between planning a story from the outside and inhabiting the main character’s point of view and thereby giving up control. By entering another point of view, the writer engages his or her unconscious, and more is at stake for the writer. He writes:

Consider this: the writer’s conscious mind is what’s piecing together the obvious story; the unconscious mind, working much as it does with dreams, tries subverting the obvious story by dropping in the surprising detail, the jarring line of dialogue, the unexpected guest, the unsettling turn of events.

Throughout the essays, McNally’s self-deprecating humor and openness about stumbling blocks, including depression and addictive behaviors, are a comfort to fellow sufferers who continue to seek methods of reinvention for work that failed to launch. There is a balm in knowing that other writers persist, despite depression, despite everything, which is perhaps why many writers congregate on social media in the first place. In a culture that values instant success, this is a book to hand to a writer who is planning to continue writing for the long term.

Tags:John McNally, The Promise of Failure, the writing life