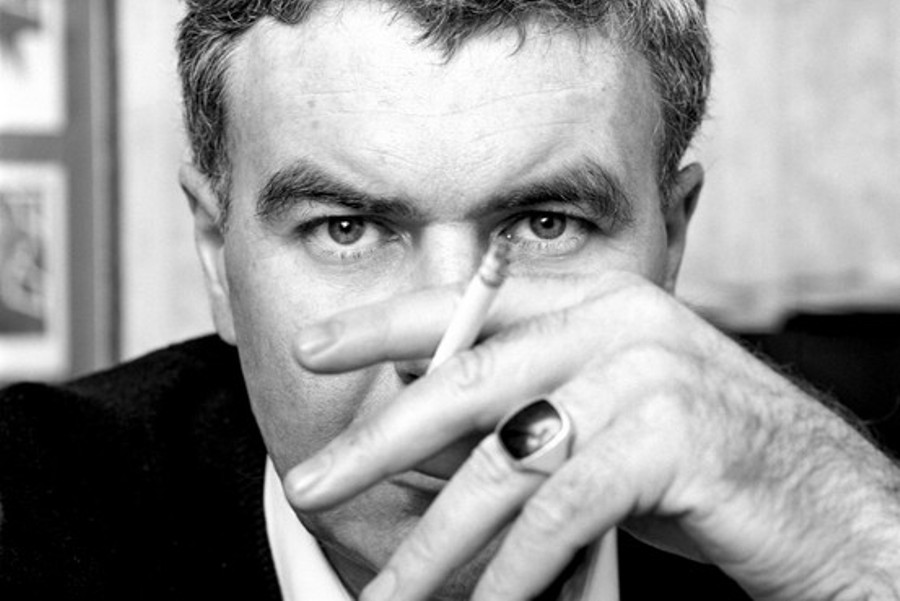 Not long after Henri Troyat’s 1984 biography, Chekhov, was translated to English in 1986, it found its way into the hands of Raymond Carver. Carver, whether he knew it or not, was near the end of his life. Before finishing the book, he began working on a short story about Anton Chekhov’s death, intertwining elements from Troyat’s biography with his own invention. He discarded multiple titles, including “The Mortician,” before finally settling on “Errand.” The writing was slow. A few months later he sent the manuscript off to Charles McGrath at The New Yorker, where several of his other stories had been published.

The magazine’s fact-checkers questioned the historical accuracy of the work and pressed Carver on the sentences where they felt he hewed too closely to English translator Michael Henry Haim’s phrasing. Carol Sklenicka, in her 2009 biography, Raymond Carver: A Writer’s Life, wrote that “Errand” required more editing than any of Carver’s previous stories. Meanwhile, Carver and Tess Gallagher, the writer Carver had been dating for years, planned two trips to Europe. The New Yorker finally published “Errand” just as Carver was about to reach a significant milestone: on June 2, 1977, ten years before, he had taken his last drink. Carver and Gallagher had arrived in London the very day “Errand” appeared in print: June 1, 1987. A year later, he was dead.

I first read “Errand” as a college student, and it stuck with me for two decades. During our class discussion of the story, my literature professor appended the information that Carver was dying while he was writing it, and pressed us to read the story biographically, as a fictionalization of Carver’s own death. When I read Sklenicka’s biography, however, I found that the details of Carver’s death did not neatly align with my professor’s claims. It wasn’t, for example, until September of 1987, three months after “Errand” appeared in print, that Carver noticed blood in his sputum, the first sign of lung cancer. This caused him to see a doctor; the resulting scans showed a tumor. Surgery, barely a month later, successfully removed the tumor. Carver’s health then rebounded. He reduced his smoking, and began making more plans for the future. He worked on the proofs for what would become his most famous book—the one I was assigned in college—Where I’m Calling From, which featured new and selected stories, including “Errand.” He gave many readings, and received an honorary doctorate from the University of Hartford. By March of 1988, however, he had to begin radiation treatment. He and Gallagher, who married that June, chose not to reveal much about his declining health to friends—few knew the extent that his cancer had spread. July brought a lengthy, but fruitless, time in the hospital. On August 2, aged 50, Carver died in his home. “Errand” was the last story he wrote.

The piece begins with a dramatic harbinger: Chekhov, out to dinner with his friend (and publisher) Alexei Suvorin, coughs up a freshet of blood. He has tuberculosis, which by then is already advanced. In the hospital, Tolstoy visits him and tonelessly discourses on his theories of how the soul lives on after death. In the only comic moment in the story, Chekhov, compelled to silence by his doctors, has to withhold his disagreement.

Several years later, in 1904, after the disease inexorably progresses, Chekhov retires to Badenweiler, a retreat near the western edge of the Black Forest. Chekhov has lost his will to write. “Every sentence,” Carver quotes Chekhov, “strikes me as worthless and of no use whatsoever.” Chekhov had been only barely able to complete The Cherry Orchard, a play and his last work, the year before.

As the famous writer’s death nears, the pace of the story slows. Finally, recognizing Chekhov will die at any moment, one doctor, in an imperturbable late-night act, orders champagne for himself, Chekhov, and Chekhov’s wife, the actress Olga Knipper. A disheveled bellhop brings in the iced bottle. Uncorking the champagne, the doctor is careful to “minimize, as much as possible, the festive explosion.” He then pushes the cork back in. Chekhov drinks the glass of champagne, turns to his side, and stops breathing. The doctor leaves the room, “and for that matter, history.” Inexplicably, as Knipper mourns, the cork pops back out.

Returning early the next morning, the bellhop finds Knipper alone with Chekhov’s corpse. This time the bellhop has cleaned himself up and “seemed quite another person.” He has shaved, brought roses, and apprises Knipper that breakfast will be served in the garden. He asks to collect the ice bucket. A long, awkward silence ensues, during which he notices the cork on the floor of the room. In a flurry, Knipper eventually instructs him to go out and bring back a mortician: “Did he understand her? Herr Chekhov was dead, you see. Comprenez-vous? Young man? Anton Chekhov was dead.” Until that moment the bellhop, stunned into silence, hadn’t even known that Chekhov was at the resort. The request is not within his duties, but Knipper is emotional and insistent.

The narrative then twists: the story flashes forward, speculating about how the errand would go. It predicts that the bellhop would be so distracted by what he was doing that he would take the vase of roses, meant for the room, along with him to the mortician’s. It also predicts that the mortician would help ease the anxiety: “Long ago he’d acquainted himself with death in all its various guides and forms; death held no surprises for him any longer, no hidden secrets.” But the bellhop struggles to grasp Knipper, so we don’t know for sure if he is able to successfully complete his task. The story finally ends with him back in the room, bending over to pick up the cork.

It’s easy, here, to miss the legerdemain. “Errand” starts with an omniscient narrator, and excerpts frequently from actual journals, writings, and letters to describe the events of Chekov’s death, and in this way, even though the story is clearly fiction, the reader is immersed in fact. “I couldn’t stray from what happened,” Carver wrote about the story later, “nor did I want to.” Indeed, several of its most memorable moments—such as when the cork pops back out of the bottle—were recounted by Troyat, but the biography covers most of what happens in “Errand” over only a few paragraphs. After being lulled by history, it’s easy to miss the transition to fiction. The tone and point of view change—and become limited—as Chekhov dies and Carver delves into the minds of Knipper and the bellhop. By the end, the story flashes ahead from fiction to events that only might happen. It is only at this grace note that the sense of doom, otherwise pervasive in the story, disappears.

As my professor noted, the most obvious metaphorical reading of “Errand” is biographical: that Carver was Chekhov. Beyond being about a great writer’s death and the mundanity surrounding it, “Errand” becomes a window into its author’s death—a story made that much more keen because Carver was near his own demise.

This interpretation is brilliantly simple, and also uncanny. Just like Chekhov, Carver’s coughing up blood presaged a horrible illness. Chekhov and Carver were both remarkably similar writers. Both came from humble backgrounds and chronicled the lives of (to use Carver’s words) “people who don’t succeed at what they try to do, at the things they want most to do.” Just like Chekhov, Carver married late in life, after a fatal illness was advanced.

There is just one problem with this reading: there is no evidence Carver knew he was dying when he was writing “Errand.”

In December 2006, Gallagher noted in her essay, “Instead of Dying,” that by quitting drinking Carver “chose to live.” The time they had together, she wrote, “would never have been possible if Ray hadn’t sobered up and stayed sober.” It is impossible, but yet still reasonable, to conclude that if Carver hadn’t sobered up, he would not have lived long enough to write “Errand.” And it surely did not escape Carver’s notice that “Errand” appeared almost exactly on his sober anniversary. He had made a concerted effort to prolong his life, or to at least not end it early.

Sklenicka’s biography gives a precise breakdown of when Carver found out about the lung cancer that would kill him. During the editing process of “Errand,” he went to the doctor for a physical and completed, he said in a letter, “lab work, chest x-rays, the works,” and had, Sklenicka wrote, “extensive work done on his teeth.” Sklenicka reported that the scans didn’t show anything; it wasn’t until October 1987 that Carver spat up blood and then discovered he had a tumor. Yet, even if Carver did get a poor diagnosis while editing “Errand,” and lied about it in his letter, it would have still been after the main writing of “Errand” was complete. In a short piece describing his writing of the story, “On Errand,” Carver doesn’t say anything about his own death, only that “I knew as I was writing this story that it was a good deal different from anything I’d ever done before.”

In Badenweiler, Chekhov talks of getting better and recovering: “To all appearances it was as if he felt, right up to the end, that he might be able to throw off the disease as he would a lingering catarrh.” This, however, is just egotism: “But he knew [he was dying]. At this stage he had to have known.” Carver doesn’t seem to have known he had lung cancer while writing “Errand,” but had he known that his health was failing and that the end of his life was near? He had been smoking for more than four decades—starting even before his teenage years. Gallagher and others continued to press him to quit, but he didn’t—he would even get cigarettes smuggled into the hospital when he had surgery to remove the tumor. Sklenicka notes that he wrote a poem not long after completing “Errand,” which contains the following lines: “It’s true my lungs / Have heated up like ovens.” “The cancer didn’t surprise him,” his friend and fellow writer Richard Ford said, as Sklenicka reports. “[H]e just hated it.”

On some level, Carver must have known that his smoking was going to catch up with him, and that he could die of lung cancer. He may not have known that he would be dead within two years, but I don’t think “Errand” could have been written as well as it was without the way his own impending death sharped his focus. Perhaps, if nothing else, it was a gut feeling. “You’re told again and again to write about what you know,” Carver told The Paris Review in 1983, “and what do you know better than your own secrets?” It’s this “secret”—from those around him, and possibly on some level from himself—that gives “Errand” its deeper poignancy. Sklenicka wrote that Carver had learned “to use stories as a tool for emotional survival, a means for negotiating the terrifying waters of his own psyche.” This is perhaps no truer than it was for writing his final piece.

Greg Walklin is an attorney and freelance writer living in Nebraska. Most recently, his writing has appeared at The Millions and in the Lincoln Journal-Star. He blogs at gregwalklin.com."