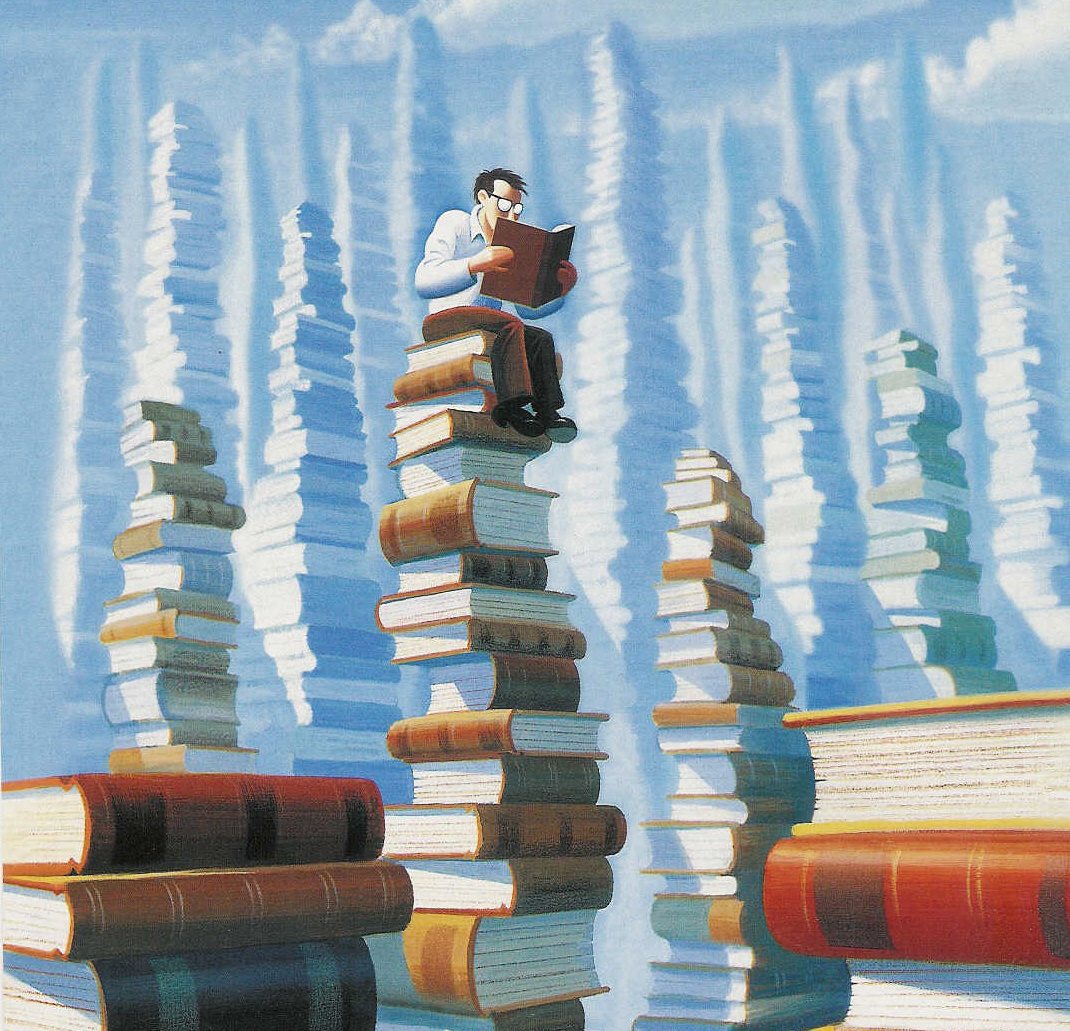 Here’s my proposal: I think all of us who write and submit creative work for publication should, for every ten submissions we send out, review at least one book for publication somewhere—Bookslut, Rain Taxi, the Rumpus, wherever. There should be some cut-off point—let’s say after you’ve got at least two books of your own, your obligation to take part in the critical conversation about books being released dissolves. This sounds, to me, almost comically simple: for every ten sets of five poems you send out, or for every ten stories you send out, you should review a book, until you’ve got two books of your own to your name.

I know this is a ridiculous proposal. I suspect it comes off as precious, or pious as hell, if not so flat-out moralistic and finger-wagging as to be distasteful. Maybe all of the above. I also know—as, I’d guess, do you—the following:

1. There’s been a radical decline in the amount of newspaper space given to book reviews. I, like most, take this not necessarily as a measure of health regarding book reviews (in the same time book coverage in newspapers has decreased, sites like the Rumpus and HTMLGiant have drawn bigger and bigger numbers), but of newspapers themselves. Book culture has moved more and more online (check out where you’re reading this, for instance); there are plenty of great online outlets for reviews.

2. There are far more folks submitting creative work to literary journals than there are subscribing to these literary journals. If the significance of that fact with regard to book reviews isn’t fully apparent, hold on a second.

3. With the exception of a few geniuses, most writers who end up producing good work are, to a one, good readers—they either read close and deeply, or they read a hell of a lot, or both. There’s also the whole MFA thing, and how it churns out people who both 1) are trained to teach writing, and have likely written quite a bit, but also 2) (should) have read a fair amount, in or out of class. It seems silly and sad that, with an MFA, folks are largely pursuing only one aspect of their degree—the writing. As anyone who reads well and clearly knows, that’s an incredibly rare and valuable skill—in other words, there’s always a need for more reviewers (and lest you think reviewing is somehow a lesser art, remember that Zadie Smith is the new book critic at Harper’s, and she took over the job the monumentally great John Leonard used to hold—and Leonard’s criticism stands up not just as great criticism, but as art: he wrote as beautifully and movingly as the authors whose work he championed).

4. If you’ve had stuff published, either in journals or as your own book, you know the weird crush that comes after whatever you’ve been so amped to see in print is finally there, in your hands, in print, and the response almost never generates the noise you imagined it would[1].

5. We know, if on nothing more than a deep down level, that when we write stuff and send it out to get published at magazines or wherever, that somewhere, someone will read what we’ve written. We assume an audience—not when we’re writing, but when we’re sending stuff out. Maybe some people don’t assume that, and maybe they’re sending work out simply for the narcissistic thrill of seeing their own name and work in print. Maybe. I’d guess that’s exceptionally rare. The point is contained in that commonly-trotted phrase: writing’s part of a larger conversation.

That’s the pre-amble. Here’s maybe another thing I should admit: I’m Midwestern, and I believe strongly in what I believe and have seemed to be the Midwestern idea that there are some things one just should do—for instance, one should remove one’s head adornment of choice when entering a house or restaurant or church (there’s your final clue to my fussbudgetry and old-fashioned-ness). This gets into the tricky territory of, for lack of a better word, morality. Un-fun as it may be to talk about it, I say it’s worth it.

Look again at the second point in that list above—that more people submit work to literary journals than subscribe. Certainly anyone who’s worked for a lit journal can tell you the problems this raises—the hours lost to having to pay attention, however slight and quick, to submissions which are comically unfit for that journal; the psychic frustration that attends being aware of the fact that people usually send submissions out in some measure of bulk, meaning someone’s cared enough to print out x number of stories, mail them, send an SASE, yet mostly doesn’t lasso resources for the sake of actually supporting the enterprise, in any way. Maybe this doesn’t bother people as much as it bothers me—I’ll certainly cop to feeling particularly frustrated by these aspects. But anyway, there’s too much of one thing—creative writing submissions—and not enough people buying/reading the actual magazine they’re so desperately trying to get into. This, financially and logically, is a system that can’t work that well (it haltingly works at present, in large part by institutional support—literary journals are at home in academics not just because there’s a pool of folks to rely on for editorial assistance, but because, often as not, the school foots some percentage of the bill). And there’s another component, other than just financial and logical, that seems to me worth examining. I don’t know of any cutesy phrase to tag this as, so I’ll just explain.

Glance back at that fifth point: the stuff we write and publish is stuff we hope, eventually, to be read, by someone. Preferably, I’d guess, by several someones. Here’s where the Midwestern morality comes in again: how can we hope for magazines and books to be read and commented on if we’re all so busy writing our own stuff, creating our own racket of submissions zooming out? Maybe I’m nuts on all of this; maybe this is not a real problem, and it’s only something I see and feel. My evidence for this, I suppose, has to do with the fact that in the last two or so years, there have been (as there always are) all sorts of great literary journals started, yet I’ve seen frustratingly few new outlets for reviews started up in the same time. Why so much energy devoted to offering yet more places for more writing to get published when the average shelf-life for the work that already exists is glancingly small and shrinking?

I suppose my question is this: what do we owe the work we publish? Anyone who writes knows that the fullest reward for writing comes almost exclusively in the writing: to nail a thought or feeling or whatever with whatever feels to be the head or heart’s best precision is a magic that no award or store-window display will rival, obviously. This isn’t about what we owe to our work, the art of the endeavor: what do we owe to the actual stuff that results? To the books and magazines? And, larger: what do we owe each other, when we all write? That sounds corny as shit, I admit. But don’t we owe each other something? Don’t we owe the books which move us some thanks or gratitude, something?

Again: I’m not unaware that this whole thing reeks of moralism and prudishness, maybe worse. However, I can’t shake this feeling I first started having in grad school, and it’s the feeling that those of us who work so hard to get literary art out to people ought to spend more energy than we presently do to make sure that art gets talked up, noticed, attended to. Maybe this is foolishness; maybe there’s more criticism going on than I presently find. Who knows. What I know for sure is that I’d love nothing more than for anybody who’s got the inclination to start a literary journal to pause, just for a moment, and consider whether or not, maybe, a publication devoted to appreciating what’s already out there might be better for the whole endeavor. What I know for sure is that I’d love it if, every once in awhile, those of us who write and submit to magazines would sit and write, instead of cover letters, reviews of the stuff that is presently moving us. Again: this is a matter of deciding what we should do. Feel free to disagree, but please, if you don’t at least try to take part in any critical conversation re: publications, if you don’t occasionally write reviews, don’t complain when the work you’ve cared so tremendously about doesn’t get reviewed, doesn’t join any larger conversation. The conversation isn’t just out there, coquettishly waiting for any of our voices to join: we make the conversation.

[1]Full disclosure: I had a book come out recently, and it’s not yet been reviewed. A savvy reader might here fairly wonder if I’m just pissed and want my own book reviewed (I know of several reviews of the book which are coming soon), if that’s what’s fueling this proposal on my part. I can’t, from here, do much more than assure you that that’s not the case: this isn’t about my book.

This is Weston’s twelfth post for Get Behind the Plough.