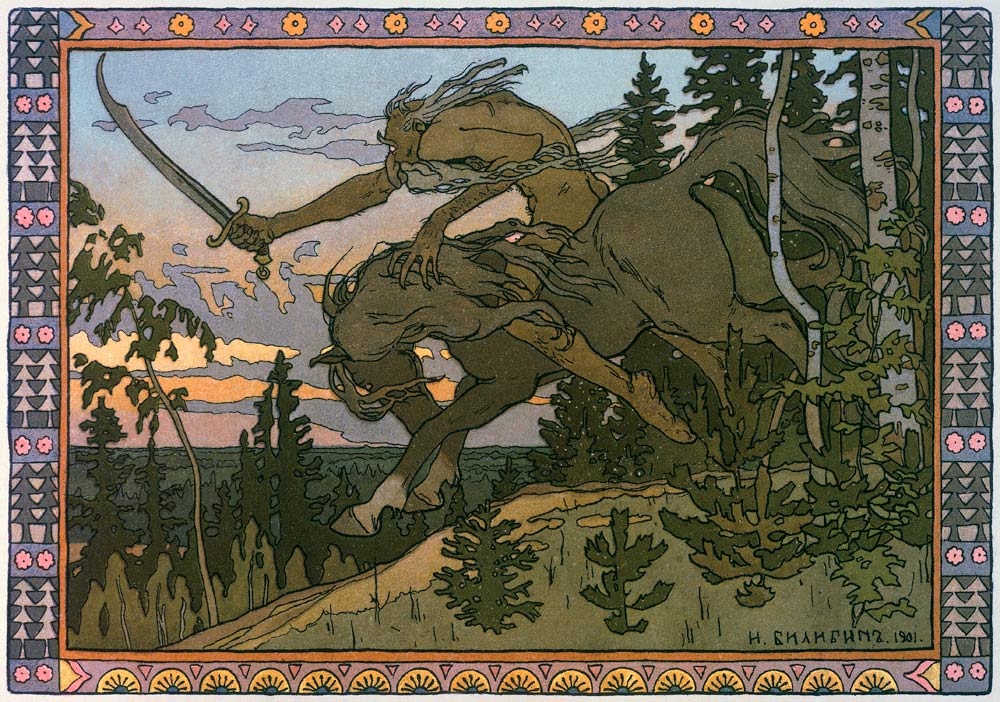 One of my favorite fairy tale illustrations is by Ivan Bilibin, for “The Death of Koschei the Deathless,” also collected as “Marya Morevna.” It shows the moment that Tsarevich Alexis meets Marya, a warrior princess he will marry. He is on his knees, staring up at her. Marya is riding a horse and carries a spear. Her hair blows in her face, and she looks at Alexis with an inscrutable expression—stern, maybe, but not loving or even particularly interested.

My memories of this illustration are so foundational to my love for the fairy tale—and by extension to my interest in Katya Kazbek’s new novel Little Foxes Took Up Matches, out today, which uses the tale as a jumping-off point to explore post-Soviet disillusionment in 1990s Moscow—that I was shocked when I realized I’d made it up. Paging through Bilibin’s illustrations while I conducted research for this essay, I couldn’t find visual proof of the image that was so clear in my mind’s eye. My best guess is that I conflated two pictures: one in which Alexis greets a cleaned-up Marya, resembling a lady-in-waiting more than a warrior, and another in which the wizard Koschei pursues the couple, hair blown back and sword in hand.

In the end, the fact that the illustration never existed doesn’t matter as much as the fact that the tale itself created a world in which the image seemed possible. “The Death of Koschei the Deathless” is a premier example of how folk and fairy tales, often interpreted as reinforcing social traditions and conformity, can actually become a space ripe for gender fluidity and experimentation. The typical man and woman stereotypes are reversed in this story, with Marya being braver and more brutal than her husband, whose curiosity leads to her capture by Koschei and forces him to perform impossible tasks to regain her, a task usually relegated to the woman partner in other fairy tales.

Although “The Death of Koschei the Deathless” is referenced only obliquely in Little Foxes Took Up Matches, the possibility for a life outside of the man/woman binary it creates is crucial for protagonist Mitya’s exploration of his non-binary identity. (Mitya never feels comfortable categorizing himself specifically as a man or a woman, but refers to himself using he/him/his pronouns, a practice I will continue in this piece.) In a country in which “fairy tales predetermine reality,” his re-creation of the folk tale allows him to engineer his queer liberation in a time and place filled with personal and public hurdles to overcome.

In the original tale, Koschei is a villain who captures Marya; in Kazbek’s novel, the dividing lines between heroes and villains are more complicated. Koschei’s death is traditionally hidden inside a needle, giving him his immortality. As a toddler, Mitya swallows a needle, leading his family to believe it is lodged somewhere in his body and will eventually kill him. When he reads about Koschei, however, Mitya identifies with him and realizes that, rather than a danger, “the needle is his blessing,” becoming a physical manifestation of his difference. He realizes early on that his perception of his gender is vastly different from the men and boys he knows and learns quickly that empathizing with the wizard opens the door for him to begin building a rich fantasy life “where he is Koschei.”

Instead of an ancient kidnapper, Mitya’s Koschei is the youngest in a long line of wizards and would rather mimic the outfits and makeup of princesses than harm them. When his father discovers this preference, he throws the boy in a waterproof barrel and leaves him in the sea to starve. Koschei Senior may violently reject his son’s experimentation, but readers familiar with the original folk tale can see that the boy is fitting himself into a mold that, while possibly unexpected for a traditional folk hero, is valid. Like Alexis, Mitya leans more on his feminine qualities than his masculine ones; he will also triumph and gain his heart’s desire in the end. In fact, Koschei is rescued from dying by a flock of birds who carry him to an island where he can nurture others and express himself without judgement. When his sanctuary is destroyed, Koschei sets out on a journey through heaven and hell to set things right.

The acceptance and agency Koschei has in Mitya’s story contrasts with the treatment Mitya comes to expect in his everyday life. Sharing a small apartment with his grandmother, father, mother, and cousin, he is unable to completely hide his preference for feminine clothing from them. While his grandmother and mother tacitly accept him, his father is distant and demeaning. Meanwhile, his cousin, Vovka, racked with PTSD from a stint in the Soviet-Afghan War, becomes openly hostile. Determined to displace his own misery into a “communal hell they all inhabited,” he rapes Mitya, using Mitya’s femininity as an excuse for this violence. This is so traumatic and disassociating it threatens to swallow Mitya and destroy his sense of self. But instead, his fairy tales provide a refuge that allows him to process the events and come out the other side with his identity intact.

Mitya’s reinterpretation of Koschei is the key to how he works through the aftermath of the rape. His decision to cast Koschei as his double and the connection he feels with the figure point to not only the totemic significance of the needle, but also to Mitya’s perception of himself as a unique other. The fact that his Koschei is able to endure similar rejection and poor treatment allows Mitya to decide that Vovka’s actions will not pass judgement on who he is. He translates his trauma through storytelling into an obstacle to be dealt with instead of a block that smothers his understanding of himself. He is able to continue to hold onto the dignity due to him through the narrative power he uses to fuel Koschei, even if that power is lacking in his day-to-day world.

The success of Mitya’s fairy tale becomes clear in his pursuit of justice for Valerka, his first true friend, who is experiencing homelessness and substance use disorder. Mitya is drawn to the man’s open-hearted acceptance of him, especially when Valerka calls him not “a boy or a girl but ‘druzhok,’ a genderless ‘little friend.’” When Valerka is murdered, Mitya discovers a cover-up to protect an influential family, becomes involved in several life-changing friendships, and works to clear Vovka’s name when he is accused of the murder.

Mitya could easily choose to see the accusations against his cousin as a way to escape, but he recognizes that, while he is guilty of many cruelties, Valerka’s death is not one of them. Mitya does, however, choose to reveal some of the truth of Vovka’s violence to his family, who finally ban Vovka from the apartment. Venturing into the seedier parts of Moscow to investigate the murder is also how Mitya meets Marina, a teenaged Ukrainian immigrant who gives him the attention he needs in order to rebuild his confidence, her sunny optimism acting as a counterbalance to Vovka’s prejudice. These resolutions are far from unambiguous—Mitya only tells his father that Vovka tried to rape him instead of fully disclosing the crime; Marina’s grasp of Mitya’s gender identity is imperfect and she has her own struggles to cope with—but he is open to the love offered him, using it as a bastion to keep kindness and hope from being overwhelmed.

This determination is rewarded in the novel’s conclusion, a small, glittering moment in which fairy tales and the real world converge. Spotting a friend he thought he’d lost, Mitya considers telling him his story: “it was behind him now, and it couldn’t hurt him anymore, so why not share?” The two run towards each other and the book ends, frozen in a moment of reunion mirroring the “happily ever after” so many fairy tales finish with. Of course there will be no happily ever after for Mitya, just as there is no happily ever after for any of us who must continue to exist in a deeply imperfect world. What he will have to shield him, however, are the stories he tells about himself.