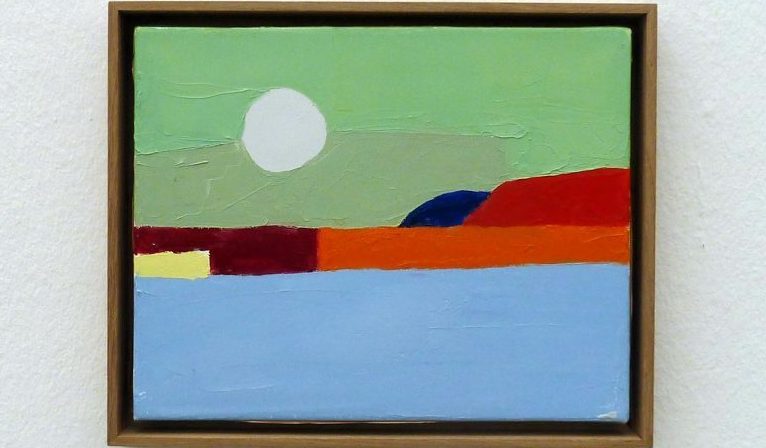 Four decades after the publication of her seminal novel, Sitt Marie Rose, set during the Lebanese Civil War, Lebanese writer, poet, and painter Etel Adnan has written over a dozen groundbreaking works. Her two most recent collections of poetry, Surge (2018) and Time (2019), build on themes from her past art and writing to present striking ruminations on life and death, home and history, memory and reality. Split into two long sections, Surge consists of one major section of aphoristic prose poetry and a second of shorter poems titled “Conversations with my soul.” Time, on the other hand, contains six sections of poems, each titled with a marker of time or place. While they differ slightly in structure, both collections flow continually, as if there were almost no section breaks.

Although the two books are so closely in tune with each other that one could imagine them produced in the same sitting, Adnan wrote Surge in English while the poems in Time are translated from the original French, and it was, in fact, her translator, Sarah Riggs, who collected the short poems in Time from a span of many years into one book. Both, however, are written in a clear, lucid tone and cross every boundary they play with. Adnan’s characteristically striking voice melts time, language, and geography to reveal the vivid truths of reality, love, and violence that linger near the end of a life and the accountability we hold to the atrocities continually occurring in our various homes.

In both books, Adnan breaks down both geography and time to establish atemporality as the standard. She writes, “to flee the hole in the air / created by a bomb in / a Baghdad suburb I reread / the words of Al-Sayyab // to ward off adversity, / time speeds up the appearance / of flowers     the children / play.” Here, Adnan escapes logical boundaries in two ways: by reading as a method of extracting herself from the reality of the bomb in the Baghdad suburb and by claiming that time can speed up something besides itself—the appearance of flowers. A third escape is possible as well, as Adnan does not note her location at the time of the bomb; spending most of her life between Beirut, Paris, and California, it’s likely she was not even geographically close to Baghdad at the time, yet the actuality of the “hole in the air” remains regardless of location.

Space and time bend in these lines to align with the essence of her writing: each stanza on the same page may allude to a different country and decade from the next. We see “Time has burned / that’s why in the / naked lightness of the clouds / we are held back by the / nocturnal voyage,” perhaps suggesting that death, or “the nocturnal voyage,” is a result of the burning, or the destruction, of time. Adnan follows this destruction closely, weaving lines such as “time can’t be translated” and “time uses a scalpel / on its own body” throughout her collections to emphasize that the linear concept of time is impossible—“I suspect that time no longer exists.” Time unravels on the physical page. The collapse of temporality again complicates our understanding of death as an end: “How to return to isolation / when there is no more time / in this eternity?” In a similar vein, Adnan uses this aberrant groundwork to shed light on the preoccupations of her mind at this later stage of her life.

“Love; a freshness of / time,” she writes, in a stunning evocation of emotion and temporal discord. The reader finds an incontrovertible expression of romance and an assertion of linearity’s inaccuracy packed into just these five words. Further, we learn that “the end of love pitches us / into purgatories or hells / there’s no need to worry / about paradise,” replacing time— the marker of what passes between life and death—with love. Adnan asserts that “love is the subversion of / death,” continuing on to describe that “there are arteries, / veins, and other channels / that all lead to death // But the conditions of ecstasy / are the same as those for terror.” In these stanzas, ecstasy and terror, or love and death, are so similar, their conditions are indistinguishable, yet the second stanza ends in the line, “Useless, this love.” Love may conquer temporality and subvert death, yet Adnan asks what purpose that serves if the two conditions ultimately feel the same. In another context, however, Adnan returns to the transformative power of love: “those who cannot leave / discover the geography / of the body. there are also airfields  / and harbors on the surface of our souls.” When the borders of a city or country are impassable, the geography of our own physicality presents its complexity: geography can always be transcended, even if the standard ways of breaking boundaries are unattainable. In both its shortcomings and its power against the machinations of time and place, love reappears in Adnan’s work as a complex counter to violence and death.

Adnan’s musings on death appear frequently in the books, often employing nonlinear and nonstandard logic to illuminate her dual resistance to and acceptance of death. She exhibits a common fear of death: “Every time I say ‘I know’ I must be meaning ‘I am’ (that simple?!). I keep repeating I am night, a statement as treacherous as the seasons.” In this yearning to assert existence, Adnan displays a refusal to accept death. She discusses how “poets resist the worship of death,” acknowledging it as “all-too powerful, but it’s death, so we shouldn’t even give it a name. But we feel too well this surging of a fear in the obscurity of the organs, this obscurity, this incestuous pain.” The battle of giving in to death becomes twofold: one must not give in to death’s power by worshipping it nor by acquiescing to the inevitable fear. Adnan often engages the question of how to assert life and conquer death, yet, throughout both Surge and Time, she interrupts her indications of attachment to life with poignant, relaxed observations on the subject. “I tell you, I’m dying,” she writes, “but the process is not that stunning . . . / the sun is lying / on the tide of the century, / there’s eternity / in the calendar of Being.” The concept of dissolved time—eternity—as an alleviation of the pressure of looming death reappears here in her most transparent affirmations of her mortality. Finally, Adnan uses her a-temporal groundwork to deliver an answer: “The universe may end as sheer light . . . the light might not end. / I am the tide that incessantly moves, and we incessantly part away.” By writing herself into the role of the ceaseless motion of water and drawing a parallel to the ceaselessness of death and parting, Adnan disrupts the idea of an end. Where time is not linear, such as in the continuous movement of the tide, there is no end. Adnan’s refusal to adhere to boundaries—temporal, geographic, and others—is precisely the answer to her search: neither life nor death can stop the other.

Most striking of its uses, Adnan’s boundaryless setting allows her to bring memory, history, and current political realities into play with each other: “What’s Memory doing among these stones that keep / coming back . . . History and Nothingness mix their / great waters.” In one poem, Adnan describes a murder in California as the drought ravages the state. “They killed a man with / a baseball bat / ‘Oh!’ said the police / ‘what a poor game!’” In a five-word quotation, Adnan deftly admonishes callous police reactions to violence. Similarly, she critiques political leaders around the world by swiftly calling out the atrocities they commit. In the lines, “to arrive in a city is another story: it means running into commanders-in-chief who have mowed down entire villages, I mean just recently,” she calls out the bulldozing of villages in Palestine by the Israeli government, which is tied so closely to many American politicians. She later moves to stress the severity of the current politics of the United States, writing, “In a civilization of dispersion / to be autumn leaves // Dark national elections, / irreversible…” Against the backdrop of constant movement, change, and nonlinear existence, the word “irreversible” carries even more weight: no matter how much our civilization disperses and time moves illogically, the effects of these elections will remain. Mixing past, present, and geography, Adnan says, “under our / footsteps a ghost / rises and instantly / disappears / because our countries / keep going up / in smoke.” Here, the downfall of nation states recurs continually, stepping on the ghosts of the past. Politicians refuse to acknowledge a history they may learn from while the present is perpetually haunted by the past, all of which breaks from linear time and instead happens cyclically. These admonitions confront our understanding of reality: abuses never end, yet when do we pay attention, and how?

“We’re led to think that poetry is the space where an object and its other territory, or the real and reality, meet, in clearest evidence, for the real to move into reality, and reality be the real.” In Surge and Time, Adnan questions our understanding of reality and the ways we attempt to parse its meaning, challenging the ideas we tell ourselves to calm unanswerable questions of existence. Her rejection of boundaries of time, geography, and standard logic echoes the very nature of her two works: one written in English, one translated from French, one intentionally written as a collection, one pulled together from many years of disparate writing. Surge and Time are inherently opposing in their histories and craft yet mirror each other so closely they could almost be one. Through this rejection of boundaries, Adnan delivers an incomparable magnitude of emotional wisdom on the uncertainties that press on through life, writing both clarity and complication into our experience of reality.