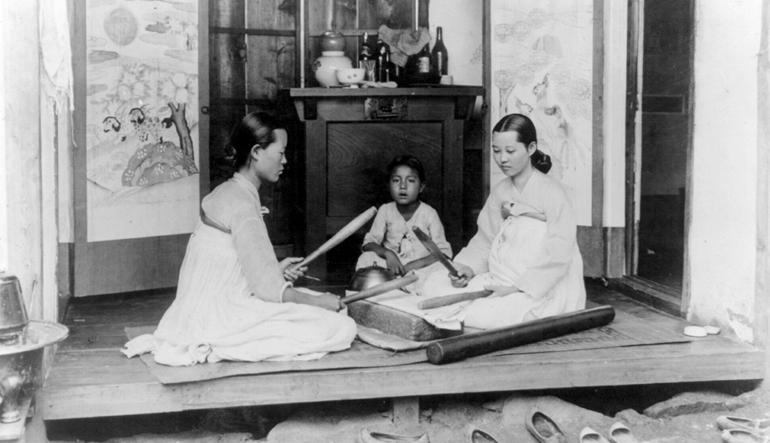 When Pachinko by Min Jin Lee opens in Japan-occupied Korea in 1910 with Hoonie, whose cleft palate and twisted foot lead the village girls to avoid him, the significance of his physical appearance to the overall themes of the novel is not immediately apparent. Hoonie’s hardworking, kind nature and his family’s successful inn eventually produce an opportunity for him to marry Yangjin, an impoverished young woman from a tenant-farming family. As the novel progresses, characters who are “marked” appear more and more frequently. The marks relegate these characters, who all fall within one family tree, to outsider status.

This outsider status is mostly generated by the events of World War II and the post-war years. By being Korean, this multi-generational family faces discrimination by Japanese people both in Korea and in Japan when the family relocates to Osaka. Koreans are viewed by the Japanese as lazy and inefficient, even though their poor circumstances are usually not their fault: hard-working Korean people are barred from decent jobs, safe housing, and access to protection from crime. Such circumstances push the characters to the fringes of the social hierarchy, forcing them down otherwise non-ideal paths. Lee’s message in Pachinko seems to be that such non-ideal paths can become honorable by virtue of the resilience, kindness, and bravery of the people who navigate them.

Isak Baek, a Christian minister with consumption on his way from the north of then-united Korea to a church in Osaka, for example, marries Sunja, the daughter of Hoonie and Yangjin, after she becomes pregnant out of wedlock. The father, wealthy Korean businessman Koh Hansu, is married, but offers to give Sunja a home. Sunja, feeling deep shame at the thought of such an arrangement, cannot accept. In marrying Baek, Sunja receives an honorable family name; Baek, in return, gets the opportunity to have a family in spite of his lifelong illness.

This isn’t the last readers see of Koh Hansu, though. Throughout the novel he steps in and attempts to help Sunja, even when the help is not wanted. As a member of the “yakuza,” a form of organized crime in Japan comparable to the Mafia, both Japanese and Korean people during the war must rely on him. His help, then, always comes at the cost of driving Sunja’s family further and further from respectability. Eventually this leads to the family entering into the pachinko business for generations after World War II. The game, a form of pinball, is seen as an addictive waste of money throughout Japan; the family wins financial security at the expense of public derision. Yet this in and of itself is an immense improvement on their earlier struggles, not a victory to be taken lightly.

As the material struggles of the family stabilize, new struggles emerge over identity and belonging. A tragic side effect of Hansu’s willingness to serve as a go-between in Korean and Japanese social circles is the intense pressure to hide Korean identity and “pass” as Japanese. Hansu’s academically gifted son Noa, who doesn’t know the truth of his origins, finds himself pushed into a corner as a “good Korean” who “ought” to model for the otherwise “bad” Korean people, until he finds himself wishing he could simply be Japanese. Eventually, this desire evolves into a wish simply to be allowed to be himself—a possibility denied over and over and over again. Even his Japanese girlfriend Akiko at Waseda University chooses to date him as an act of defiance toward her racist parents, failing to see her action as simply another form of racism. She openly uses him as a symbol of her supposedly accepting nature, saying,

Akiko is blind to the effects of her words, which wound Noa deeply:

She would always believe that he was someone else, that he wasn’t himself but some fanciful idea of a foreign person; she would always feel like she was someone special because she had condescended to be with someone everyone else hated. His presence would prove to the world that she was a good person, an educated person, a liberal person. Noa didn’t care about being Korean when he was with her; in fact, he didn’t care about being Korean or Japanese with anyone. He wanted to be, to be just himself, whatever that meant; he wanted to forget himself sometimes. But that wasn’t possible. It would never be possible with her.

Noa cannot overcome these external pressures to be a certain kind of person, so he turns his back on his bright academic future for a low-profile job in a pachinko parlor not connected to his father’s business. He goes into hiding even from his own family. But even here Lee continues to explore how an apparently shameful path can lead to an admirable life: Noa marries a Japanese woman scorned by others because of the suicide of her father, and they raise several smart, inquisitive children. Even though his own life ends early in a deep tragedy, up to that moment he acts in a manner that recalls the kindness of his adoptive father, the minister Baek, to Sunja all those years ago.

Noa’s little brother Mozasu is tough, charismatic, but not academically inclined, so he can’t learn to read or write in Japanese. This effectively bars him from any school and work opportunities that would be considered “respectable” by Japanese standards. He leaves the cruel schoolyard for a job in a pachinko parlor, which proves to be his salvation. He never develops the agonizing desire to pass as Japanese that proves catastrophic to Noa, so he is able to ride the tragedies of life without breaking. Where Noa feels compelled to abandon his name and family, Mozasu readily gathers the many generations of his family around him. Where Noa’s kindness depends on his anonymity, Mozasu can be openly kind to both Korean and Japanese people without hiding who he is. He is also, unlike others, able to find love and friendship with some Japanese peers. He fosters long-term relationships with two Japanese women who were ostracized by their own families, and his lifelong best friend is a homosexual Japanese man whom Mozasu rescued from bullying in their school years. Often, then, this love and friendship is fostered by the very outsider status they share, if in different forms.

The journeys of Noa and Mozasu lead readers eventually back to their mother. Noa’s disappearance and death form a cruel, tragic wound that she wonders if she deserves. Mozasu remains with her throughout her life, filled with the usual ups and downs of longevity. Her experiences with both sons reflect the myriad ways Korean residents in Japan struggled to make sense of who they are and how they can live. Readers can walk away appreciating that she and her sons never deserved to be ostracized—nor did her father or any of the family members that followed. It was always a matter of perception and prejudice. But readers can also walk away with a sense of admiration for Sunja and her family for exercising great courage and kindness to give their lives value even when that value is often, even today, denied in public narratives of what it means to be Korean in Japan.