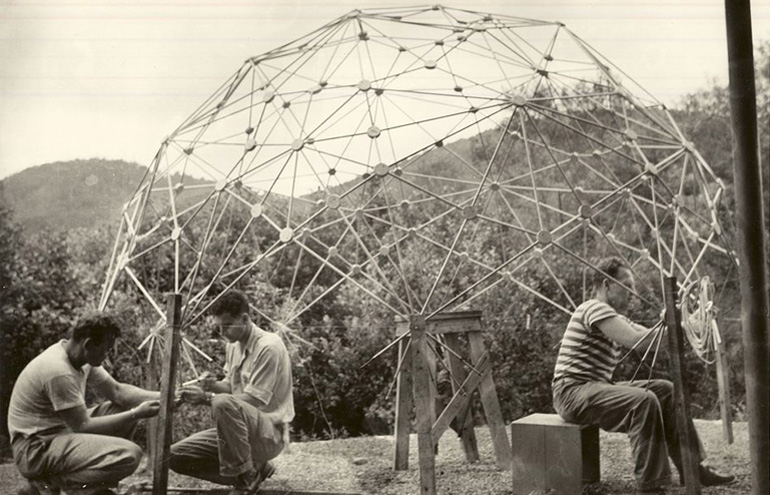 Black Mountain College sprung up in the 1930s, just outside of Asheville, North Carolina, in the Blue Ridge Mountains. It was a short-lived school born in a time of crisis. Asheville had been hit hard by the stock market crash. In Germany, the Nazis shut down the Bauhaus, and artists from the school found refuge in Black Mountain. Photographs of the college (which was only in operation for two decades) show a long, low, many-windowed building, nestled between mountains, languid and serene on a lakeshore. But the college’s history suggests anything but stillness. It was a fluid environment, with students and teachers sharing the labor of maintaining the college. It was in this mobile, interdisciplinary, experimental place, surrounded by writers and artists from across the country and around the world, that Charles Olson formulated his theory of projective verse: “A poem is energy transferred from where the poet got it . . . by way of the poem itself to, all the way over to, the reader.”

In his essay “Projective Verse,” Olson discusses the role of place in projective poetry, and the way exchange between mind and environment creates poetic energy. In Olson’s poems, and the poems of his contemporaries, the boundaries between interior self and physical space are porous. In “Projective Verse,” Olson suggests that the poet arrives at the most humble and compelling depictions of physical space by starting within, with the ear and the breath: “If he stays inside himself, if he is contained within his nature as he is participant in the larger force, he will be able to listen, and his hearing through himself will give him secrets objects share.” Olson’s poem “Cole’s Island” and John Wieners’s “A Poem for Painters” both deal with how a mind moves through physical space, and how places move through the mind. Setting isn’t explicitly described at length in these poems, but an awareness of place is central to the transfer of energy between poet and reader. By blurring the lines between thought, dream, and myth, but mentioning specific place names, the poets redefine place and what it means to move through physical spaces, centering the experience of place in its effect on the body. This sense of place as ephemeral, accessed, and anchored by “the breath,” is fitting for poets who spent time at the captivating, but ultimately temporary, art school in the North Carolina mountains.

“A Poem for Painters” reads like an intimate, stylized notebook. When musing about art or the poem itself, the speaker takes on a melancholy, self-reflexive, self-critical tone:

I hesitate before this paper
scratching for the right words.

Starting with the body, the poem repeatedly expands from the hyper-aware, uncertain speaker to a vibrant natural environment. What follows is a transfer of energy back to the speaker from the environment:

Showing light on the surface
of our skin, knowing
that so much of it flows through
the veins underneath.
Our cheeks puffed with it.
The pockets full.

The boundaries between self and nature, self and light, self and the streets, are fluid. The language the speaker uses to describe place echoes the language he uses to describe the self. “America, you boil over,” writes Wieners. A stanza later he makes this image of excess personal: “We are run over.” The poem’s sixth stanza includes a litany of place names, beginning with “South of Mission, Seattle, / over the Sierra Mountains, / the Middle West and Michigan.” The physical descriptions of place aren’t particularly enticing until the speaker personalizes them:

The South, familiar land,
lush places, blue mountains
of Carolina, into Black Mountain
and you can sleep out.

In his essay “Projective Verse” Olson calls his rule about nature and the poet an “inverse law”: “The artist’s act in the larger field of objects, leads to dimensions larger than the man.” By staying small and personal, in other words, the poet can access grand, timeless objects. “A Poem for Painters” meanders through many moods: it’s about overwhelming desire, lost love, the frustration and exhilaration of creating art. But as it moves it expands, gathers speed, and creates an image of loneliness, heartbreak, and desire that translates to a scale beyond the personal:

This nation is so large, like
our hands, our love it lives
with no lover, looking only
for the beloved.

This is a key idea behind Olson’s theory of place: to give nature the grandeur it deserves without elevating the poet to heroic dimensions. This delicate balance is at work in Olson’s “Cole’s Island,” in which a man walking in the woods meets Death. The poem’s first line: “I met Death—he was a sportsman—on Cole’s / Island. He was a property-owner. Or maybe / Cole’s Island, was his.” Throughout the poem, Death’s appearance is rather vague and nondescript, “Maybe he had gaiters on, or almost / a walking stick.” He doesn’t particularly discomfort the speaker; rather, the reader gains a sense of discomfort through the speaker’s succinct description of the island, which is “a queer isolated and gated place.” The speaker’s unease with Death’s presence surfaces in relation to place. “My difficulty, / when he did show up, was / Immediately at least that I was / an intruder, by being there at all.” Cole’s Island functions as a physical place with relevance to the speaker (“I was only there by will / to know more of the topography of it lying as it does out / over the Essex River”) but through the motion of the poem takes on symbolic weight, acquires an otherworldly glow. Still, the speaker doesn’t let the reader forget the place’s physical reality: “It was as quiet and as much a piece / of the earth as any place can be.” In projective verse, a focus on breath, signified by spaces on the page, eclipses use of simile and description. “Cole’s Island” centers on this space, this breath, and in doing so creates a simple and powerful image of a cloistered place where a man and Death can pass casually on a curving path.

It’s easy to imagine Black Mountain College itself featuring in projectivist poetry. An idyllic but not heroic setting, animated briefly by those who lived there, who focused on their own breath, aspects of their own humanness, in order to understand the nature around them and the vast spaces and tangled events beyond.