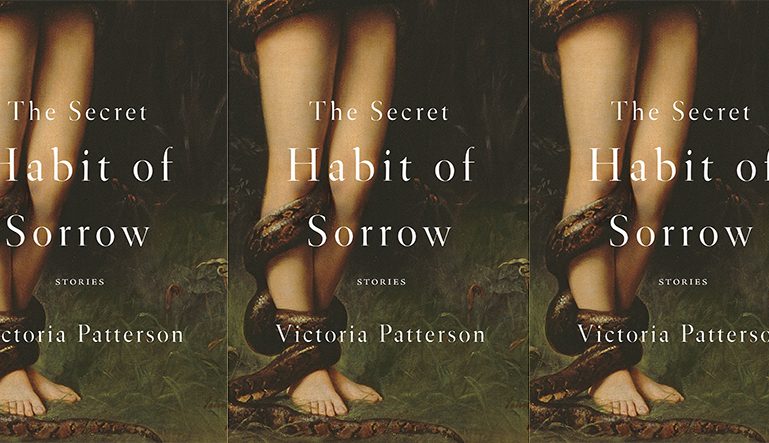 Unlike many other short story collections, Victoria Patterson’s The Secret Habit of Sorrow does not take its title from a story within. Instead, the title is buried in “Confetti,” a story about a professor who struggles with his feelings for his ex, whose drinking problem has spiraled so far out of control that she is homeless and whom he finds one day passed out and reeking on his office floor, her bloated liver bulging. When he sees her, he thinks back to a Henry James passage she once quoted to him after a fight, “something about the secret habit of sorrow, and the sharp pain of missing opportunities.” Nearly all of the protagonists and those characters eddying around them feel this secret habit of sorrow too.

The source of this sadness is varied, but themes emerge across stories. Moneyed parents leave children feeling like unloved accessories; characters turn to drugs and alcohol to fill voids; husbands and wives are separated or else estranged, and one or the other has an affair only to reach back for a spouse they’ve now lost. Characters connect over trauma—alcoholics bonding over sobriety, survivors of sexual assault sensing kindred spirits who have faced similar traumatic experiences. These stories mostly transpire in the swirl of Los Angeles and its surrounding beach communities—Hermosa Beach, recovery centers in Malibu—peopled by Botoxed, appearance-obsessed, waifish women, men who date women decades younger as if they are disposable, and protagonists who don’t quite fit in this world.

Some characters feel sorrow in the absence of a loved one or a loved one’s eminent death. In the opening story, “How to Lose,” an aunt has been caring for her sister’s young son, AJ, after his mother dies of an overdose. Each day is a challenge for the two, particularly school drop-off where they often cry. But the biggest hurdle for AJ is graduating from Guppies into the next swim group—he can’t keep his head under water for ten seconds, although he practices at home in the bathtub. For AJ, the noise underwater “‘sounds … like a big empty space that can swallow [him],’” and Natalie discovers, once again, all the ways that his mother’s death haunts him, a wound they both struggle to salve.

And truth—or the slipperiness of it—pervades the stories as well. In “Visitations,” Rachel stumbles upon her estranged grandpa when she supports a friend visiting her father in a Malibu recovery center. Rachel begins a relationship with a man she has never met—he’s long been expelled from the family for reasons she’s not quite sure of. “Of course,” he tells her, “your grandmother and mother have differing versions. You can’t ever really know the truth, just like you can’t ever really know what happens to another person, or what they think happened to them, which becomes the same thing.” In the end, Rachel recognizes just how true his statement is when, in one of Patterson’s deft elisions that says everything, she finally comes to realize what her grandfather has done to be exiled from the family so thoroughly.

Patterson demonstrates her storytelling prowess in what she leaves unsaid. Rather than write the trauma—a half brother molesting his sister, a father committing incest with his daughter—she lets the characters’ reactions and the trajectories of their lives communicate what she does not explicitly describe. “When she said, ‘I’m only going to say this once, and you have to promise not to ever tell anyone,’ I understood that Rusty’s attention to me had been an attempt to get to her, and that he was very dangerous,” the narrator remembers in “Johnny Hitman” when she, at twelve, is pulled from the pantry her friend’s seventeen-year-old brother took her into. Although we never get her friend’s certainly horrible, painful story, we know what this story will be.

Patterson has a flare for endings, deftly avoiding tying her stories into tidy, saccharine bows, but neither are they crushingly dark. In “Parking Far Away,” the protagonist, a young twenty-something struggling with sobriety, takes a job as a cleaning lady although she comes from money and doesn’t need to. When her colleagues have her take an intoxicated colleague home so she doesn’t lose her job, a woman who has always been cruel to the protagonist, the woman surprisingly smiles at her in the end. “I wasn’t sure it was a smile,” the protagonist thinks, “and I leaned out the open window to get a better perspective. I saw that it was and that the smile was directed at me, and my heart broke into a thousand shards of sunlight. Then she turned and walked in a zigzag pattern to her door.” Patterson’s spare yet beautiful conclusions are ambiguous, leaving the reader with neither the complete destruction of the character nor the promise that they’ll prosper.