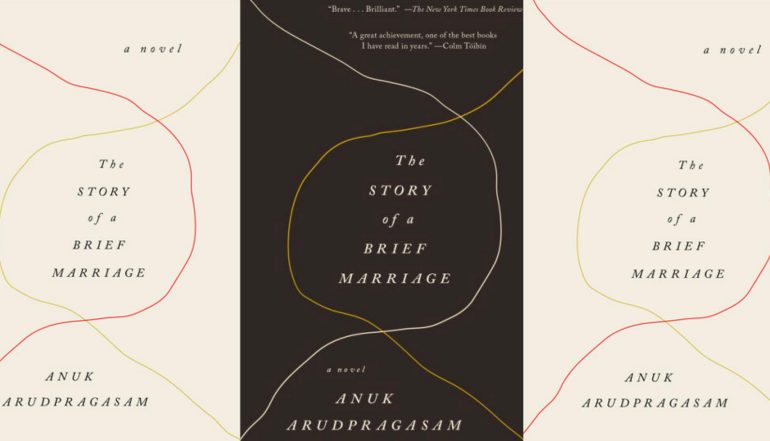 War is strangely quiet in Sri Lankan writer Anuk Arudpragasm’s debut novel, The Story of a Brief Marriage. The titular brevity refers to the novel’s running time, which takes place over the course of a single day, but the story and its scope are anything but perfunctory. Dinesh, the novel’s thoughtful, reclusive protagonist, lives in the jungle outside of a refugee camp in the midst of Sri Lanka’s Civil War. His solitude is interrupted when one of the old men in the camp offers up his daughter, Ganga, for marriage. Dinesh accepts, and the two young newlyweds dance between intimacy and estrangement while navigating the realities of life during wartime. Arudpragasm expertly and elegantly mines the story of the marriage, exploring the nature of violence and human loss. Recently awarded the DSC Prize for South Asian Literature, the novel was praised by the jury chair for its “exploring the tragic heart of war with such quiet eloquence.” The stark, marked quiet of the novel is notable given its subject. War is deafeningly loud. Bomb blasts ring in the ears, men and women wail in mourning, children cry, guns spit noisy bullets. This all happens in The Story of a Brief Marriage, but Arudpragasm has a sensitive ear for the hush that falls afterwards. It is in this quiet that the pain and devastation felt by these characters is heard.

Dinesh’s experience of the war is defined by his quiet solitude. He lives in the forest outside of the refugee camp, preferring to stay on the peripheries of the ramshackle community, rarely speaking with others. The camp is regularly bombarded, but Dinesh finds a sort of peace during the bombings: “[t]he world became mute, like a silent film, and as a result the bombing often brought about in Dinesh a sense of calm.” He uses similar language when trying to remember his old life: “Recollections of that life did come back to him now and then, but only in brief traces, in silent images . . . that could not be connected with other things . . .” While the silence brought on by the bombings washes the world clean of the sounds of wartime, the silences in Dinesh’s memory make his past life, before the war, painfully dissociative. This dual quality expresses itself in his relationship with Ganga, whose aloofness puts off Dinesh at first. But the silence between them changes with their relationship:

These subtle observations of silence are a testament to Arudpragasm’s watchful eye, one that makes visible the intimacies and discomforts that are a part of love, friendship, marriage, whatever the unexpected, but also totally familiar relationship is that Dinesh and Ganga have with one another. They are two strangers each feeling out, and feeling for the other, in a quiet dance of understanding and misunderstanding that offers some small relief from the war.

Where language fails Dinesh, the body succeeds. It’s in his own physical discharge that he is able to communicate kinship with the world around him. After a bombing early on in the novel, Dinesh goes to the beach to relieve himself. It’s a risky choice—he could easily be spotted by militants, but he wants to excrete “somewhere quiet, somewhere comfortable, somewhere he could take his time.” This is excretion as a sort of prayer or meditation: a silent offering of the body to the earth. “It was vital [Dinesh] dig a good hole in which to bury his shit,” writes Arudpragasm, “for the offering he was making to the earth would be void if not properly presented.” The everyday mechanisms of the body are made into a sacred ritual here. It’s the kind of silent communion between man and the earth that is made rare during wartime. Later, laying with Ganga in the jungle, Dinesh hears a cry in the dark. When he goes to investigate he finds a crow, its neck angled awkwardly, near death and calling out in pain. Dinesh debates putting it out of its misery, but hesitates. “Perhaps [the crow] had been calling out into the darkness just so that it could be for a while in the presence of someone else,” he thinks. He cannot stay long—Ganga is waiting, alone—so he leaves a part of himself on a tree in the clearing where the crow lies:

He pulled up his sarong with his left hand and held his penis aloft with the other. […] Straining […] he opened his eyes and watched as a long, soundless stream vaulted up […] guiding it upwards strained harder to see how high and far he could make it go. He pushed for as long as he could but gradually the arc began to diminish […] then dwindled finally into a single drip.

It’s another ephemeral but simultaneously sacrosanct act. The body turned into a natural wonder, a waterfall, proudly speaking into the earth a brief message: I was here, a witness to all that has passed.