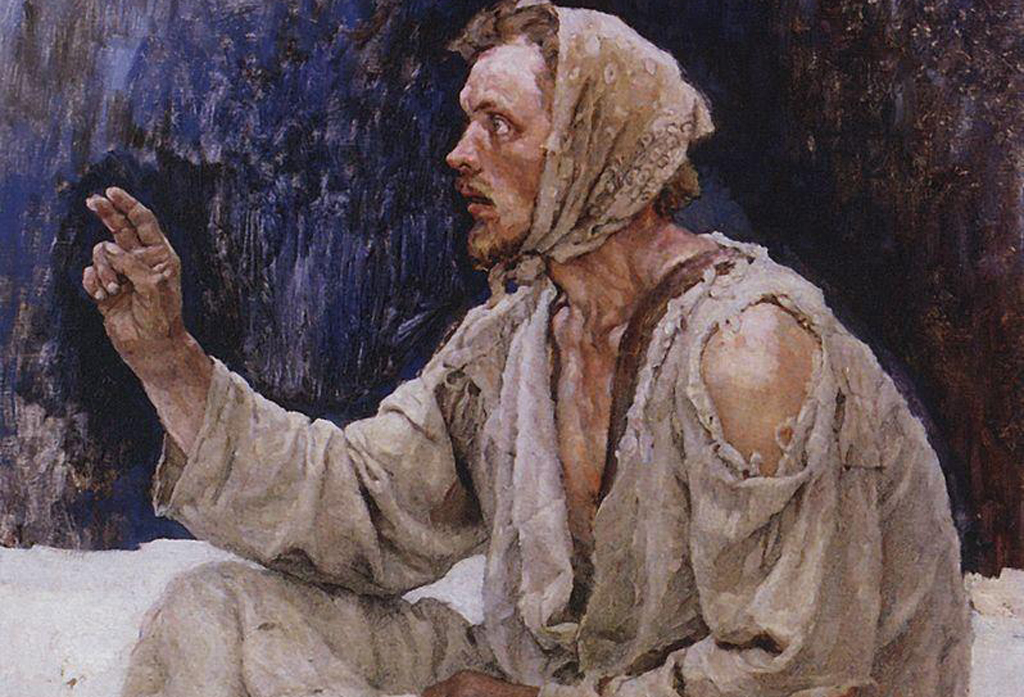 I fell in love with Anna Karenina when I was newly 18. It was the summer between high school and college, and the force with which she drew in those around her pulled me to her, too. She lived in my mind like someone I knew outside of Tolstoy’s tome of a book. Anna is mesmerizing, but she also serves as a window into the Petersburg society she exists in, until it drives her to her demise. Reading her story I felt it all: the extravagant balls and fraught family relationships, her love for the son she’s forbidden from seeing, the unhappy marriage and adultery, the uncertain lover, and the birdcage of her hoop skirt and the weight of her gowns. Until I began reading Russian short stories again this summer, I’d forgotten how many are dominated by singular characters like Anna who are shaped by Russian culture. As in Anna Karenina, there’s something distinctly Russian about the way these characters exist in their landscape, which in every case is made more distinct by the stories’ startling conclusions.

Tolstoy’s later work, which he wrote (in theory) from his belief that art should either convey “feelings coming from a religious consciousness of man’s position in the world with regard to God and his neighbor,” as he writes in What Is Art? (1897), or be “universal art, which conveys the simplest everyday feelings of life, such as are accessible to everyone in the world,” is brief. He was harsh with himself and found it difficult to justify writing fiction but did anyway in Spartan prose. Nowhere is he briefer than in “Alyosha the Pot,” a five-page story in Richard Pevear and Larissa Volokhonsky’s translation (which I quote from here), written nearly 30 years after Anna Karenina was published.

“Wrote Alyosha, very bad. Gave it up,” Tolstoy noted in his diary on February 28, 1905, five years before his death. I understand Tolstoy’s dismissiveness; at first glance, the story seems flat: the titular character cheerfully obeys his father and master until the day he dies, the end. Though Tolstoy felt the story didn’t meet his exacting standards, Alyosha embodies Tolstoy’s ideals. His child-like quality and obedient nature makes him a “holy fool,” a figure in Russian literature Tolstoy found particularly attractive later in his career because of the holy fool’s simpleness and religious nature, separate from the church. Pevear writes that the holy fool appealed to Tolstoy because he “lives and dies with a purity and inner peace that forever eluded Tolstoy and most of his characters.” But only in “Alyosha the Pot” does a holy fool get his own story. Tolstoy’s treatment of Alyosha may cross over into objectification, but what makes Alyosha a singular character is the way in which he evades being objectified, something that can only be found when Alyosha’s feelings slip through how his father and master view and treat him.

Alyosha is considered valuable for having essentially no character. He’s described as “always cheerful,” and after his father scolds him, “he smile[s] and set[s] about whatever work [is] before him.” When the merchant Alyosha’s father sends him to work for is skeptical of Alyosha’s “milksop” appearance, Alyosha’s father describes him as “above all . . . uncomplaining [and] greedy for work.” Alyosha doesn’t strike as a singular character like Anna Karenina does for her fieriness or even for the spunk of her sister-in-law, Kitty—he’s striking because of his seemingly one-note nature that becomes subtly complicated through tiny details that reveal he’s not the soulless workhorse he’s made out to be. From the small revelations Alyosha has throughout his brief life arise questions of why he makes the choices he does.

When Alyosha gets new boots, having worn out his brother’s hand-me-downs, he fears his father’s anger over the cost but has his own distinct feelings, too: “Alyosha was glad of them, but his feet were still the old ones, and by evening they ached from running around, and he was angry with them.” Alyosha feels gladness and anger, not just the cheerfulness his father and the merchant relish and expect. Interestingly, too, Alyosha conflates his boots with his feet, which he turns into an entity separate from himself. This substitution feels child-like, and demonstrates that his desire to work is something he does for himself because he enjoys it; he finds his feet’s failure to immediately adjust to the new boots a frustrating letdown. He has another new experience when he discovers through the kindness of Ustinya, the cook, that sometimes “a person just needs another person for no reason, so as to do something for him, to be nice to him, and that he, Alyosha, was that very person” for Ustinya who “needed him, not his work, but him himself.” At 21, Alyosha discovers for the first time such love and care, and though he’s consistently dehumanized by his father and master, Alyosha’s emotional discoveries pithily communicate what it means to be human via a succinctness that’s striking.

Noticing his feelings for Ustinya arouses fear in him since caring for someone will take away from his work, “[b]ut even so he was glad.” Again here, Alyosha feels gladness and recognizes it as something different from the cheerfulness he feels from work and obedience, and his conception of gladness deepens. Ustinya and Alyosha become engaged, and there’s a promise of a happy union—until the merchant has Alyosha’s father tell Alyosha to call the marriage off. With Ustinya listening behind the door, “[t]he father spoke a lot. Alyosha stood and sighed,” smiled when his father finished talking, and said, “‘Well, it can be given up,’” to which his father responds, “‘That’s the way.’” The engagement is over; Ustinya is crushed. Rather than defend his choices, as one might expect, Alyosha is obedient, but when the merchant’s wife asks him about it later, “he laughed and all at once wept.” Alyosha discovers another new emotion in the moment: sorrow, the foil to his gladness. Having lived so long under his father’s rule where he never felt needed by another person other than for work; as such, Alyosha is only just now developing an emotionally complex understanding of the world. When he capitulated to his father, he hadn’t yet felt anything that would cause him to weep, and so couldn’t have anticipated the feeling calling off his engagement would evoke. It’s possible, too, that despite his sadness he has made the decision knowing that marriage could cause them both more hardship; perhaps Alyosha purposefully saves Ustinya from that fate. The reader’s frustration thus feels misplaced: to be frustrated at Alyosha means to be frustrated at him for something he didn’t yet know. Once again we must re-evaluate our understanding of him as well as our own reactions.

At the story’s end, Alyosha discovers something else new for the first time, but the discovery is withheld. Cleaning snow off the roof, Alyosha falls, and by the third day after the fall, it’s clear that he’s dying; the priest is sent for. They pray, and Alyosha speaks little, asks for a drink, and then “kept being surprised at something . . . He got surprised at something, stretched out, and died.” It isn’t clear what Alyosha is surprised at: the feeling of death? A religious awakening? Is he surprised at more than one thing or the same thing continually? As with his realization after aborting his relationship with Ustinya, there’s the possibility that he’s made a discovery that will change his understanding of the world and affect how he moves through it.

Before he dies, he tells Ustinya that he’s glad they didn’t marry; this way he’s not leaving her a widow. Having no precedent, Alyosha can’t conceive of what happiness they could have had together, but death, he knows, is inevitable, and so he sees no reason why he shouldn’t just die now. “Why should I live, why desire anything, why do anything?” Tolstoy writes in A Confession (1882). “Is there a meaning in my life that will not be annihilated by the death that inevitably awaits me?” Alyosha, it seems, doesn’t learn to desire until it’s too late, and then he lets it go and learns, too, what that feels like. His life is simple: a pair of new boots, work, and a relationship with a person who teaches him that there is more to life than work—all of which death annihilates. While Alyosha may fulfill an idealization for Tolstoy, despite him giving up the story, Alyosha lingers in my mind because of the way he moves through the world despite how others oppress him, because of how he grows from each discovery even if the change isn’t radical, and because of the curiosity piqued by his last surprise.