Home
»
Critical Essays
»
The Story and the Overstory 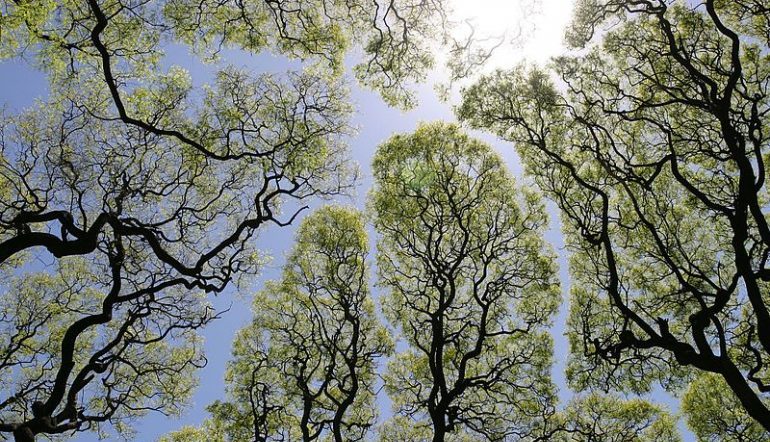 Trees are whispering from the first pages of Richard Powers’s remarkable new novel, The Overstory (W. W. Norton & Co., April 2018). “Listen. There’s something you need to hear,” says a pine tree to a woman leaning against its trunk. Throughout the story, the voices of trees rise and join in “a chorus of living wood,” trying to share their secret wisdom and halt the human destruction of the forests before it is too late. Not everyone can write about trees and make it a compelling story. Here, however, Powers embraces his premise so fully that it forms the framework of the book, sprouting up in everything from the characters to the plot’s minutiae.

The structure of The Overstory reflects trees, with sections called “Roots,” “Trunk,” “Crown,” and “Seeds.” Trees figure prominently throughout the novel—a banyan tree that saves the life of an air force sergeant in Vietnam, a chestnut tree that becomes the subject of a series of photographs passed down through generations, and a pine tree painted on an ancient scroll, among others, are all integral to the plot and could be considered characters. Human characters in the novel take on tree-like qualities too; one character is described, for example, as “a thing reaching toward the sun, ready for anything.”

In a recent interview with Conjunctions, Powers explained his deliberate decision to make trees central to the story not only as the theme but also as characters:

[O]nce you begin to see trees—really see them as creatures with agency and intention and the capacity to communicate—they become characters in their own right. My goal, in The Overstory, was to treat trees as persons in their own dramatic narrative.

The way form reflects content in The Overstory reminds me of other great works, such as Paul Harding’s Tinkers. In each of these novels, there is a kind of “overstory,” or meta-narrative, that gives additional meaning and layers to the story at its base, making for a more expansive world and a more deeply felt experience for the reader.

In the Pulitzer Prize–winning Tinkers, the overarching theme is not trees but clocks (and time). The opening line sets out this structure: “George Washington Crosby began to hallucinate eight days before he died.” Eight days, Harding tells us, and the countdown begins, like a clock winding down, a loosening of gears that sends the hands of time spinning. He creates the hallucinatory effect of trying to piece together scattered memories, jumping back to and across different moments of one’s life, mixing present and past tenses, shuffling and suspending and speeding up time in a stream-of-consciousness style.

Using this play on time to structure the novel, Harding is able to create a lush and captivating world for the reader that transcends well beyond the confines of a man on his deathbed. The author spoke in a Tin House interview years ago about how this form emerged in the process of writing:

[T]o an extent, the subject lent itself to an associative rather than linear architecture. Not only because of the hallucination and disillusion of his consciousness, but also because so much of the novel is interior—I thought of it as moving around associatively, like a mind does. When we look at the life that we live in our minds, it is not linear. We organize it into linear patterns because we all have to put on shoes, and get to work, but your mind moves around very associatively. So my writing method and the subject matter, in that way, complemented one another.

Like in The Overstory, theme determines structure and is reflected in the characters; in the case of Tinkers, it is the image of a clock, or time itself, coming to life as the clock-repairing protagonist struggles to make sense of the time he has lived. Take, for example, this telling observation by the dying man, evoking the body of a clock: “When his grandchildren had been little, they had asked if they could hide inside the clock. Now he wanted to gather them and open himself up and hide them among his ribs and faintly ticking heart.”

I can see how imposing a form on a story for the sake of building a certain structure or outcome could be gimmicky, but these novels succeed in doing something close to revolutionary. How else would a narrative about trees, or one about eight days on a deathbed, come to life so vividly? The way these authors let innovative structures reflect the content at their hearts is an audacious feat of creativity that elevates and enriches the works beyond their simple plots.