Home
»
Personal Essays
»
The Story of a Stranger, Ghosted 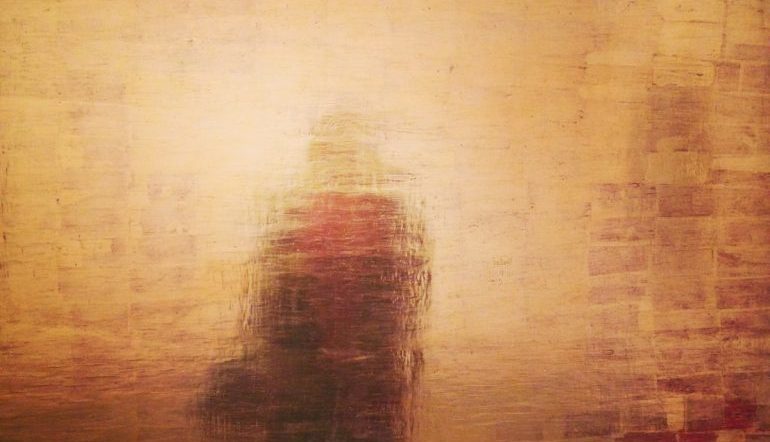 When entering St. Louis, you expect the silver rope of the Gateway Arch to swing down to the ground, a giant swish, then swing back up again—but it holds there, fixed, catching the sun.

Through the back channels of the city we drive. Beyond my window, perched on a rooftop: a Ferris wheel, twin silos, something steepled, disinterred crosswalks. It is the City Museum, I’ll later learn, a “play house” of repurposed things sprouting up through the remains of the long-defunct International Shoe factory.

The solder and glue of the imagination.

The mucking together of disparate parts.

A metaphor for a writer in progress.

We have driven through the June green of a rural Pennsylvania summer, over the line into Ohio, past the Licking and Muskingum rivers, and into the general lean of Columbus. And then, after a night’s stay, we have traveled on through a purple storm and past the black coil of a highway snake into and then out of Terre Haute to here.  We are partway to most of the way across the country. I am in pursuit of the stuff of a novel. A book I hope to someday call my own.

I had pictured something different when we put St. Louis on our map. The ornamental spandrels and decisive corner piers of Louis Sullivan. The solemnity of the old courthouse. Dred Scott. The Arch, yes, but I’d mis-imagined that as well. I had thought, too, that I might encounter traces of my own great-grandfather, Horace Kephart, who had, between the years of 1890 and 1903, famously directed the St. Louis Mercantile Library, before breaking down (stones in his pocket? a river?) and abandoning (it is a harsh word) his wife and six children. He went east to regain his health and then south to outpost alone among creeks, caverns, bear haunts, blind bugs, and the flowering hills of the Carolinas and Tennessee, before cocreating the Great Smoky Mountains National Park and dying, tragically, on what some say was a moonshine run.

I think of how many times I have tried to write his story. How many times I have only poorly told his story. Some people resist interpolation, even when they’re family. Some novels don’t get written. Some names are never known. There is no smoke of my great-grandfather’s ghost in the streets of St. Louis, but that is okay, I think, because I’ve moved on. His story is not the story I’m pursuing.

The Mississippi is riding low. We leave our rented car in a parking lot and our bags at the Magnolia Hotel and walk until we can see the Arch—barricaded, we find, behind a construction fence. A massive beautification project is under way at Jefferson National Expansion Memorial, a reconciliation of land and politics, and if some of the park grounds are currently out of bounds, nothing blocks the intimate view of this 630-foot-high soar. It’s the tallest manmade monument in the Western Hemisphere. Scrubbed stainless steel on structural steel and mostly hollow and given to sway. Though it sways, it endures, and it is profoundly known.

My husband tilts his camera and leans to capture the infinite twists of the steel against the sky. I stand with him, then walk off, taking my own photographs of the swanny neck, the divine mathematics. The Arch is banked on a low hill. There are stairs leading away, and now I turn and head toward the river, where Clydesdales hitched to carriages clop along the sandy banks and sightseeing helicopters buzz like mosquitoes above my head. Across the way, east, stands the Cargill factory.

A rusted oilcan lies dented on its side. There is a complicated system of bridges and shadows beneath the bridges, and I think of all the ways that writing is a sacrificial art and how language is never merely given and how many miles we have yet to drive to the dot of a town in New Mexico, where I believe my brand-new story is peaceably awaiting. Irises. Cows that stand beneath the hover of flies by a withering stream, the wings of the flies filching the sun. A husband’s hat hanging from a doorway peg. The life of an artist, the house in which she lived, her studio, her peacock feathers, her story that I aim to make my own.

Her story that I aim to claim.

The river barely moves. It is tepid, lethargic, only distantly temperamental. My husband has completed his portraiture of the Arch, and now we walk the banks, up and back together, stretching our legs. I think, as we walk, of the novel I will surely make, the novel that is surely mine to write, for doesn’t the artist, now dead, belong to me? Her irises? Her cattle? Her land? Her husband’s hat?

Are they not mine for the taking?

Am I not ready?

I have ghosted whimsy and executive thanks, the heartbreak of a composer, the poetics of another’s inspiration, the exuberance of a dying woman, the victory over diagnosis, the ferocity of a plan, forewords, afterwords, middle chapters. I have ghosted orations and reports, analysis and history. Once, I wrote the memoirs of a Philadelphia river—called her a she, wrote her story in prose that was mostly poetry— and once, I wrangled the I for a doctor of Qi who was killed before her book was done; my words as her words became the words (others surreptitiously told me) of her memorial service, her legacy. Soon, though I don’t know it yet, beside the low-lying river, beside the Clydesdales’ clop, beside the Arch, I will be writing voice-over scripts for a TV show—slowing my language to the fundamentally fundamental before whipping it up into the sly frenzy of the essential contradictions that sound, catastrophically, like me.

But this novel that I want to write about this woman who once lived, this voice I am creating to sound like the voice she might have had, this story I am shaping so that her story will be told: This is different.

Me speaking for her is the story.

Alexandre Dumas turned to Auguste Maquet to help write, among other things, The Three Musketeers. Decades before Katherine Anne Porter won the Pulitzer Prize and National Book Award, she ghostwrote My Chinese Marriage for Mae M. Franking. Not long after Tony Schwartz wrote The Art of the Deal for Donald Trump, he wrote a book called What Really Matters, “about the search for meaning in life,” in the words of Jane Mayer. Jennie Erdal, in Ghosting: A Double Life, professed that through her years writing for and as another, she “at times felt [she] was living someone else’s life, occupying someone else’s head. And losing the way in [her] own.”

I have lost my way.

I am tired of losing.

We leave the river and stop for a San Pellegrino at a shop across the street from the Blues Museum, one block down from the convention center. There is hardly anybody about, only a few cars in the street, a handful of young trees along the sidewalk trying to gain some height behind yellow caution tape. In the outdoor seating, any table that we want is ours. Any chair will hold us.

A stranger arrives wearing a navy blue dress, a delicately zippered navy blue jacket, and an elaborate necklace. She carries a snakeskin purse with an impressive cubic zirconia clasp. The nail of the ring finger of her left hand is cubic zirconia encrusted; the rest of her nails are a deep shade of red. She has scalloped her short white hair so that it frames her face: yin and yang. She is breathtaking—not the merest mist on her skin, despite the heat of the day, and elegance in every bone.

Inside the shop, my husband procures our drinks. Out here, at the round table in the empty street, my posture is bent and vulnerable, defenseless. I watch the street. I click through my photographs. I carry a notebook and a pen.

And I say nothing.

She pulls up a chair. Settles herself. Asks me to pardon her shoes—a pair of flats; she left much better shoes, a pair of stilettos, in the hotel. She explains that she’s here for the convention, tells me the convention’s name. “You ever heard of it? Five hundred thousand people in town. At least.”

I look up and down the street. No crowd on any street. I look at her. She smiles.

I am invited to shop with her on the convention floor. To join her for a church sing. To cut across town for a meal. I explain that we’re just passing through.

The stranger clicks the clasp on her purse. When she blinks, I notice the smart fringe of her false lashes.

“Let me tell you about me,” she says.

My husband has arrived. I catch his eye. He is in no mood for this. He wants to know how it has happened again, why it always happens, if it is on account of the way I sit, the way I lean, the way I’m seen—not entirely put together and in some way self-effaced. I advertise little about myself, I am careful with that terse word, “writer,” but perfect strangers seem to sense the ghost in me. The wide-open accommodations of my imagination.

This stranger, certainly, has sensed it. She has seen. She begins:

She has been an adjuster, a churchgoer, an educator, an entertainment-venue owner, an occasional model. She has stomach issues, but surgery is still a few weeks off, and while she’s here, in St. Louis, she’ll be eating her fair share at Sweetie Pie’s, which Oprah made famous. Stomach be damned. She is currently weighing a new endeavor—a beauty business gig—and by the way, she says, she didn’t just own a single venue. She owned several.

She clicks the clasp on her bag. Reaches in for her card, her name. She slips it my way, applies a fresh daub of lipstick, takes a good look at my camera, and doesn’t mind, she says, if I take her picture.

My husband looks at me.

I look at her.

I stand to get a better angle. I acquiesce. I click.

She runs her finger over the scallops of her hair. She smiles.

“You know,“ she says, and her false eyelashes swish, “I could use a writer.”

I have learned the same things.

I am guilty of collusion.

The stranger speaks. She speaks. My husband stands. My husband starts walking and I start walking, the stranger’s card in my hand. Later, I will write her facts into my empty pages. I will click through, and click through again, the portrait photographs. My husband and I will spend a quiet night at the hotel and encounter no whiff of the crowds. The next morning, we will leave the quiet city and climb back into our rental and drive and drive from St. Louis to Oklahoma City to a dot of a town in New Mexico, where I will walk the artist’s land, I will touch the artist’s irises, I will photograph the hover of the flies and stand inside her studio and interview her son and hold her letters in my hand and picture the cover of the book that I am making. A book that will be built upon another life that I am borrowing.

The only story that survives for now is the story of a stranger—ghosted, fading. The only posture I maintain is the one that finds me leaning.