Home
»
Critical Essays
»
The Sympathizer and the National Imagination 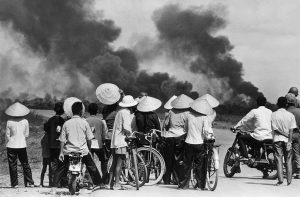 As a young child, I learned that there is an aura of silence around the Vietnam War. Garments that must have been part of my father’s uniform hung in his closet for decades. We used an army green wool blanket to sit on when my family went camping, or on a picnic, or to lie and watch fireworks on the state house lawn for the Fourth of July. I remember seeing dogtags somewhere, probably somewhere I wasn’t meant to be looking. There are photos of my father in uniform in my family’s one and only photo album, or at least there is one photo, and in it my father’s arm is in a cast, or an elaborate bandage.  I don’t remember how, or when, I learned not to ask questions.

My father enlisted in the US Army before he could be drafted. It’s my understanding that he did this in order to have some control over what his role would be. I think his job in the Army had something to do with aerial surveillance. In those days, that meant darkrooms and developing film. In the basement of the house I grew up in, there was a large framed photograph, maybe 20×30”, a portrait of a Vietnamese boy, no more than a toddler, reaching his arm through a barbed wire fence, his fingers making a peace sign. As an adult, now, this image borders on cliché, but for the look on the boy’s face, and that he was looking at my father holding a camera, and that this photo was framed, kept between boxes, or leaning up against a shelf, yet still in plain view, on the floor of the basement.

Viet Thanh Nguyen’s The Sympathizer re-situates history. 3 million Vietnamese died, and 58,000 American soldiers. The US lost the war, but still got to write its history into the American imagination in a way that, as imagination tends to do, glosses over reality. A generation later, Nguyen has given this history an authentic voice—a voice that has been brushed aside, hidden from discourse, from textbooks, from individuals whose identities contain it.

I started to read The Sympathizer this past summer, when a friend of mine, a man my father’s age, who happens to have avoided the draft by going overseas, gave me a copy. I got twelve pages into the book when I decided that if I continued to read it, I’d need some historical context for the opening sequence of The Sympathizer, which launches with the fall of Saigon.

The silence around the Vietnam War is not something that exists only in my family.

I’ve been lucky enough in my life to have received more formal education than many, but almost all of what I know about the Vietnam War comes from Hollywood films, and then maybe also Tim O’Brien’s, The Things They Carried, which I read in high school.  None of this prepared me for Nguyen’s novel.

In a moment of boldness I called my father and told him that I needed context for the fall of Saigon because I felt like I was lost in the very beginning of the novel I was reading. My father and I talk about books and we talk about history, so I felt that even though I was venturing close to restricted territory, I was pretty sure he would be glad to share some of the intimate knowledge he held. Not only did he get me up to speed and help me understand the inherent complexities of a double agent, or a sympathizer, like Nguyen’s narrator, but he asked me questions about the novel. Then, a month or so later, when he and my mother were visiting, my father asked if he could borrow The Sympathizer.

In a radio interview, Ngyuen referred to the Vietnam War as “a civil war happening to the American soul.” In a piece Nguyen wrote for The Guardian, Nguyen says that in writing The Sympathizer, he “aimed to destroy the American perspective on the Vietnam war, which influences how most of the world sees [Vietnam].” And after being asked by an interviewer if Nguyen ever learned the story of his own parents, who settled in the US as refugees, being robbed and shot in the store they owned, Nguyen said, “I sympathize with the idea that maybe we shouldn’t ask our parents to have to relive the difficult things that they survived.”

The depth of social significance in which even just the concept of The Sympathizer sits, is remarkable. The novel is a confession, told by a nameless Vietnamese narrator with political, moral, and cultural dualities. Nguyen chose to tell the story as one Vietnamese person talking to another Vietnamese person, deliberately dismantling the conventions of minority literature, which mostly addresses an overwhelmingly white literary audience. In its structure and content, The Sympathizer presents an overlooked historical context.

One of the objectives of literature is to ignite conversations we as societies and individuals might not otherwise have. I got a very long text from my father several weeks after his visit in which he told me he doesn’t watch movies about the war: he prefers to remember it as he saw it. He was in disbelief at Nguyen’s ability to capture the fall of Saigon, the attitudes of the Army of South Vietnam, and the details of life in Vietnam during those years. My dad was amazed that someone who left Vietnam as such a small child in real life, a member of another generation, could do what Nguyen has done: capture an authentic history, filling in some of the silence.

The Sympathizer seems to have grounded a part of history, balanced it in a way that humanizes experience, instead of popularizing it to fit into a certain national imagination. Without irony, I think my father, an American soldier, identifies with Nguyen’s novel because there is more truth in it than he’s found anywhere else, because underrepresented voices actually offer a more inclusive history, one that moves toward complexity, toward a realistic and more humanistic understanding.