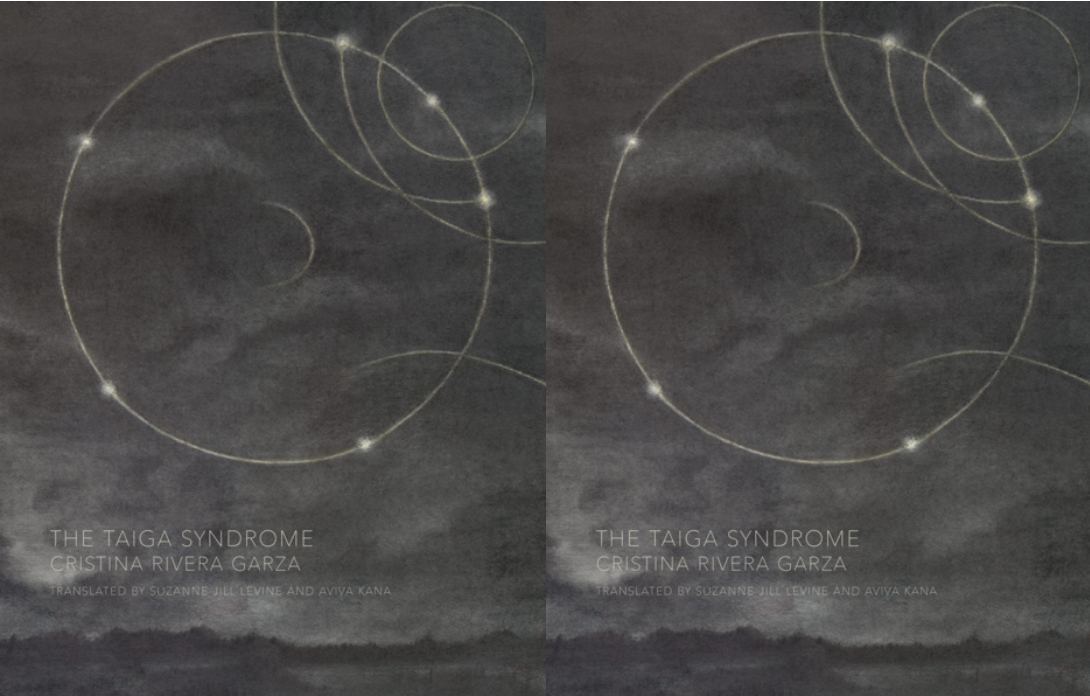 The books on my bedside table are throwing an early Halloween party. There is the pile of Shirley Jackson novels, tales of traumatized female friendship in witchy dresses. There’s The Third Hotel—Laura van den Berg’s amazing novel of grief and solitude, done up as a Hitchcock heroine. And now there is Cristina Rivera Garza’s The Taiga Syndrome: a very slim, dark-suited novel skulking around in a Sam Spade fedora, but revealing itself to be a haunting meditation on—well, so much really that it’s ridiculous to attempt an exhaustive list here.

Garza’s unnamed narrator (in fact, all of Garza’s characters lack proper names, but more on that later) used to be a detective. Or at least, she used to try to solve cases—they were, by her own admission, all failures. Now the narrator writes noir novellas but is called out of her exile for one last case when a man at an art opening asks her to find his runaway wife. The missing wife has fled to the Russian taiga with her lover, leaving a trail of telegrams that the narrator dutifully follows out into the wide, frozen wastes and primeval forest, with a translator as her only companion. The pair find themselves camped out in a hut on the edge of a small village—a hut in which the runaway couple had also stayed for a time, before moving on under mysterious circumstances. No one in the village seems willing to divulge these circumstances, or anything else about the couple, for that matter. Our narrator is forced to reckon with the dark secrecy of an isolated community and the threat of madness endemic to the landscape itself.

So far so noir, except that this summary, along with every other summary I’ve seen in reviews and copy for The Taiga Syndrome, fails to give an accurate impression of the experience of reading the book. First, the story is nonlinear, not in a Memento kind of way but in a You-realize-time-is-an-illusion-don’t-you? one. What there is in the way of plot—and there is plot here—is dominated by an obsession with language.

The language of the edition I read is most directly the work of Suzanne Jill Levine and Aviva Kana, who produced this first translation from the Spanish (and only the third English translation of Garza’s seven novels). Translation itself is a major theme of the book. Even after the narrator finds her translator, “tongue to tongue: a speaker of their tongue who would translate everything into my tongue,” Garza describes most events as coming through filters—through speaking, writing, or gesture. But Levine and Kana’s fantastic language is surprising, highly stylized and very, very precise. The repetition of phrases (“I remember…above all I remember,” “I told the truth”) in sections separated by many pages act as a series of bells, training readers to remember, to believe, and to fear on Garza’s terms.

This repetition brings us to what drew me to The Taiga Syndrome in the first place, which is its surprising use of fairy tales. Two are named explicitly: Little Red Riding Hood and Hansel and Gretel. Garza alludes to these two tales with the plot—a telegram breadcrumb trail, a literal wolf at the door—and she also includes interludes on the stories’ academic interpretations. But her reference comes in a more foundational form as well, in her application of certain stylistic techniques common to all fairy tales. Scholars like Kate Bernheimer and Max Luthi list these techniques differently but usually agree on three: rigidly repetitive language (such as the use of “once upon a time” or something similar), special logic or normalized magic (nobody bats an eye when Sleeping Beauty pricks her finger and falls asleep), and maybe most importantly here, a flatness of character (a preference for the archetype over the psychologically realistic).

I’ve described Garza’s repetitive language, but she deploys these other techniques, too. Special logic is used to terrifying effect in a few scenes I won’t give away here, but which have caused at least one reviewer to (rightly) call the book Lynchian. The archetypal nature of the characters—“the detective,” “the translator,” “the man with two wives”—is particularly central. The characters’ flatness is not complete, as it would be in a true fairy tale, because the characters’ thoughts and actions do imply complex motivations and deep emotional lives. But it’s this tension between archetype and reality that leads us to the true heart of the narrator’s struggle: “The desire between one thing and another. The desire of bodies and, at the same time, the desire to narrate bodies.” Some writers who invoke fairy tale do it for the trance-like rhythm and rich symbolism, some do it for the thrill of recognizing an old story retold, for the sheer necromancy of it. But the best authors use it to talk about story itself. They do it because they are obsessed with what we’re really doing when we draw a narrative frame and call something a story. This is exactly what is happening in The Taiga Syndrome.

At the level of imagery, this becomes most obvious in the motif of the window, repeated throughout the tale—the “sacred” rectangles we all build in order to safely define the people around us, and to frame the vast, maddening taigas we know are just outside our bounds of self. In one interview, Garza said that she is obsessed with borders, with drawing and transgressing them. But her use of language and suspense is so skillful that she can remind us of the artifice of fiction in one moment, holding us up so we can see everything in its place, and in the next push our heads back beneath the surface of its conceit.

It’s hard to make out the roots and branches of Garza’s literary family tree. There is something of Borges in her combination of detective story, dizzy philosophy, and dream logic. Then, too, her use of language and her treatment of a woman’s self-narration becoming madness reminds me deeply of reading Claire-Louise Bennett’s Pond. Of course, The Taiga Syndrome wasn’t available in English when Bennett was writing Pond, and besides, there’s something darker and queasier and more universal in Garza’s vision. It seems that she really might have a new way of telling, as The Taiga Syndrome’s narrator would say, the truth. Of asking, perhaps without hope for a clear answer, her ultimate question: Is it better to live forever confined behind frames we’ve drawn, or to lose our minds in a world without borders?