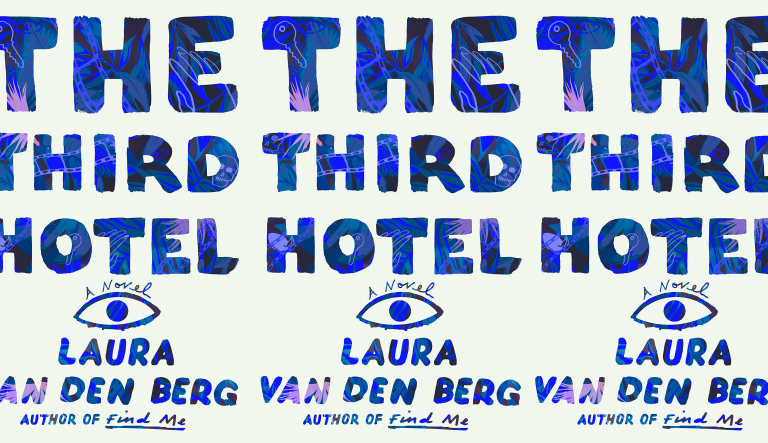 The Third Hotel, Laura van den Berg’s gorgeously eerie second novel, begins with a question, one that protagonist Clare returns to again and again: “What [i]s she doing in Havana?” Dense and uncompromisingly intelligent, The Third Hotel is uninterested in leading the reader to a simple answer. Buoyed by van den Berg’s sinuous, marvelous sentences, the novel is instead a deep dive into memory, love, and loss as filtered through film theory, metaphysics, and the humid, sunstroked cityscape of Havana. A lesser writer might have lost themself in this byzantine world of maybe-doppelgangers and maybe-zombies and maybe-madness, but Laura van den Berg is one of our most accomplished storytellers—it is no surprise that she has elevated the uncannily horrifying into something achingly human.

At the novel’s start, Clare is in Havana, Cuba, attending a horror film festival in her husband Richard’s stead. He couldn’t make the trip because he died—“struck by a car and killed in the United States of America some five weeks ago.” So, Clare, a self-described “white woman of middling age and appearance, in tan pantsuits and unfashionable pumps,” decides to go to Cuba as a kind of pilgrimage of mourning, where she can “slip through unseen” and “walk around an imposter.”

This idea of the imposter is one that The Third Hotel obsesses over. The book is steeped in a literary (and cinematic) tradition of doubles, doppelgangers, and, yes, the undead, all of which constellate around a singular, impossible occurrence, what Clare views as either a “gross violation of nature” or a “dislocation of reality.” Early in her stay, she finds her dead husband alive and well, and though his face is just slightly different, “as though incredibly subtle plastic surgery had been performed,” she knows it is him. She fears, of course, that she has “fallen into the age-old tourist trap of arriving in a place and projecting the thing she want[s] most in the world onto a screen.” But she cannot unsee what she has seen. His appearance presents an existentially terrifying prospect, one the book mines for the majority of its pages: If Richard has returned from the dead, what else lurks in her experience of reality?

The Third Hotel is not a horror novel, but it is decidedly a novel about horror, specifically the surreal, world-upside-down kind that comes with grief. Van den Berg’s points of reference are more David Lynch than John Carpenter, more Julio Cortázar than Stephen King. If the novel’s complex presentation of horror has a key, it comes from Yuniel Mata, the director of the fictional film Revolución Zombi that Clare has traveled to Havana to watch:

Mata said to plunge a viewer into a state of terror meant to take away their compass, their tools for navigating the world, and to replace it with a compass that told a different kind of truth. The trick was ensuring the viewer was so consumed by fright that they didn’t even notice this exchange was being made; it was a secret transaction between their imagination and the film, and when they left the theater, those new truths would go with them, swimming like eels under the skin….

… The foundation of horror is a dislocation of reality, a dislocation designed to reveal the reality that has been there all along.

In seeking this “foundation of horror,” van den Berg offers various unsettling images and sporadic motifs, such as a human fingernail, “fully intact and flawless in its shape,” or elevator doors “pried open with meat hooks.” Escaped ostriches run through Havana, threatening to kill with a kick. Movie stars disappear and reappear incognito. As Clare pursues her husband’s form around Cuba, she imagines Mata’s eels “squirming” and “sliding around” in her body. She even carries with her a literal mystery box, a tiny taped-up enigma she cannot bear to open for fear of what is inside. And excerpts of Richard’s academic work are peppered throughout the novel. Clare clings to his writing as a way to process what is happening to her, while the reader is encouraged to reckon with the inherent subjectivity and “invisible revelatory force” of film—or, more pointedly, of literature.

Given the book’s basic synopsis, one would be forgiven for approaching The Third Hotel as a puzzle-box narrative that builds to a dramatic reveal. Van den Berg, thankfully, is less interested in the solution to the puzzle than she is in the reader’s experience holding the pieces. The point of this novel is the open-endedness of its resolutions. Meanwhile, in the story’s background, there is a narrative about Clare’s father, living with dementia, as well as hints of a hidden betrayal that only comes to light near the story’s end. These elements act as necessarily messy complications, reminders that Clare comes from a real place, that she has a real family, and that the horror of losing someone can take many forms.

Fittingly, The Third Hotel ends with a startling image: a murderous moon over the water, an echo of James M. Cain’s masterpiece of psychological fiction Double Indemnity, which was itself later translated into a piece of classic film noir. The Third Hotel is full of references like this, as well as nods to new and classic texts—Colson Whitehead’s The Intuitionist and Rivka Galchen’s Atmospheric Disturbances come to mind, in the best of ways.

But The Third Hotel is undoubtedly the creation of a singular imagination, and though van den Berg writes into and around theories of horror cinema, she does so without sacrificing the enigmatic ephemerality of fiction. In fact, she embraces the looseness of interpretation that good fiction offers. Thank goodness for writers like her. About Havana, van den Berg writes, “the signals [are] manifold and often contradictory, making it easy for a person to find support for whatever narrative they [have] decided to seek.” So, too, books like this one, which deserve to be read multiple times, in close proximity. Each experience with the story will be different, and each should be lingered over, as one would a dream.

After all, it is said that a dream doesn’t repeat, or if it does, it is ever so slightly different from what was dreamt before. The Third Hotel is a kind of dream, one that should be repeated. Finish the book, ponder the dream, then read it—dream it—again.