Home
»
Critical Essays
»
The Threshold of Memory and Return 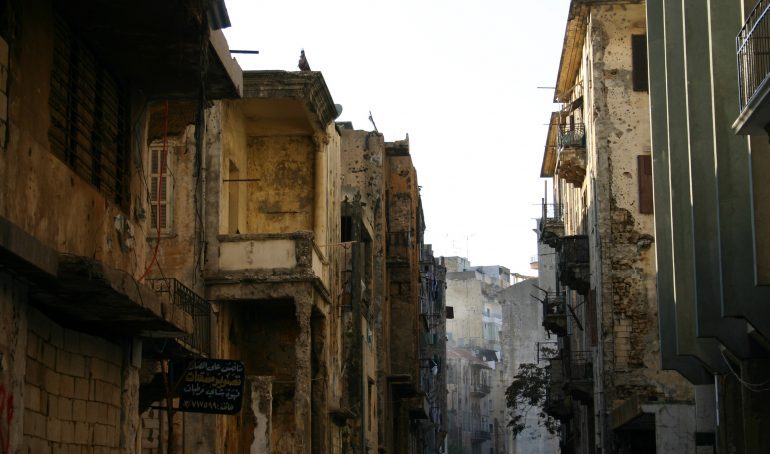 Iman Humaydan’s Other Lives, translated from the Arabic by Michelle Hartman, follows Myriam as she makes her way back to Lebanon after leaving, first to Australia and later to Kenya, during the Lebanese Civil War. Trapped in a marriage of convenience to an English man and tormented by the disappearance of her young lover and her aborted child, Myriam finds herself in a state of perpetual sadness and exhaustion, and repulsed by stability. She is plagued by traumas from the war, her personal life, and the lives of her family members before her: after her brother, Baha’, is killed by a bomb in the war, her mother plunges into silence and her father—whose brain was penetrated by a shard of shrapnel doctors couldn’t safely remove—loses his sanity, while her grandmother mourns the fractured family’s last male heir. As the new heir, Myriam, who experiences time and memory in a nonlinear manner, returns to Lebanon to reclaim her family’s house from the displaced settlers living in it. Met instead by waves of old memories, rejuvenated relationships, and a host of new obstacles, she never crosses its threshold. Other Lives probes the unanswerable, navigating the difficulties of maintaining loving connections amid consistent loss, having and dictating memories of violence among disparate groups, and what it means to return. Confronting the manifestations of trauma in individual people and larger communities, Humaydan’s nonlinear form exposes the importance of living with complexity despite its accompanying discomfort in the context of the Lebanese Civil War and beyond.

Trauma plays the central role in Other Lives, its multiple forms and symptoms indicative of the cyclical, nonlinear time that dominates the novel and Myriam’s life. Humaydan writes two main catalysts of trauma: war and personal suffering, the latter of which often has a gendered aspect. The principal experience of war violence for Myriam and her family is the death of Baha’. Myriam’s mother, Nadia, had always been subservient to the demands of her mother-in-law, yet for the first time on the night he was hit by a shell on the balcony of the family’s home, she refused to follow her husband’s mother and decided that her immediate family would stay in their apartment rather than head to the bomb shelter—only to watch her son be blown apart and a shard of the shrapnel enter her husband’s brain.

Myriam, who inherits the gender oppression her mother experienced, is also tormented by the disappearance of her young lover, Georges: “The war kidnapped Georges . . . He’s neither alive nor dead. He’s between two places, suspended between war and peace, the past and the present.” Unable to find any closure on her relationship with Georges, Myriam marries Chris, an English man, out of convenience, but cannot experience sexual pleasure or happiness with him, resorting to memories of past lovers while they have sex to get by. Myriam’s trauma deepens as we learn that she and Georges had conceived a child that she aborted to avoid the scandal of pregnancy outside of marriage. The memory of her ability to conceive before George’s disappearance later haunts her as she discovers her infertility while with Chris.

These traumas cause Myriam to fall into a depression that defines every moment of her life. Constantly irritated and repulsed by many of Chris’s habits, Myriam keeps all her things in thirteen suitcases, noting, “my suitcase has become my home.” She refuses to form any stable commitment as small as unpacking a suitcase or having a routine of coffee or a walk in the morning, but knows these avoidances stem largely from her experience in the war. The reader, however, infers that this refusal reveals her inability to accept that the kind of love she felt with Georges and the prospect of having a child are dead.

Myriam continually re-asserts the reason for each of her parents’ trauma symptoms. Each time she brings them up—her mother’s silence and her father’s insanity—the reason for them changes, ranging from Baha’’s death to a protest of female oppression to guilt at not having a closer relationship with Baha’. By presenting each new reason as if it were the first diagnosis made in the novel, Myriam begins a pattern of cyclical, nonstandard narration. Similar to this nonstandard narration, time and memory for Myriam are also circular, causing her to relive and re-question her past and the events of the civil war. She notes, “My life feels like interrupted sequences of time, like scenes in a film that begin just as another scene ends. My memory of everything that has happened is not continuous, but circular. I always come back to where I began.” Her memories redefine themselves throughout the novel, much like the changing rationale for her parents’ traumas.

Myriam’s mind, however, is not the only circular aspect of the book. She writes that stories of the war “go nowhere but backward; they return to the same place they started from and then sometimes flare up, taking on a more violent form.” While Myriam’s nonlinear memory causes her to repeatedly search for a memory of the war, she acknowledges that the war stories she seeks contain that same inability to hold themselves stable. Humaydan, too, writes in a nonlinear, sporadic form, jumping back and forth in time and place without clear demarcation. Composed in one long section with paragraph breaks between settings, the novel’s form mirrors the “interrupted sequences of time” to which Myriam compares her own life, bringing Myriam’s many traumas and the instability of memory to the physical experience of reading.

Myriam’s continual questioning of what happened to those disappeared in the war and what it means to remember leads to a confrontation between her nonlinear experience of time and her friends’ refusal to acknowledge their country’s past. This clash emphasizes the difference between those who lived through the war and those such as Myriam, who left partway through but still experienced part of the war and feel it defines their relationship with their homeland. Myriam is shocked by the statement all her friends in Beirut repeat—“the war is over.” Around them, they can clearly see it is not so. In describing this longing for normalcy, Myriam says, “Everything happens here as though life is normal, though there are still roadblocks and checkpoints in many places. People in Beirut do whatever they please, but in order to stomach this, they eat nostalgia with a fork and knife and then broadcast the leftovers through the media.” The urge to bury the war and hide from the responsibility of cleaning up the aftermath is thick enough to cut and loud enough to send through airwaves. Her friends, however, feel they have a “right to forget,” as they lived through the horrors of the war, while Myriam interprets this as being accused of “the crime of having a memory, especially the memory of those who left the country during the war.” Through this clash, Humaydan encapsulates the burden of memory: should those who have already dealt with years of violence be forced to relive it in the name of memory? Can someone who experienced war from a distance truly have any memory of the violence? Who is responsible for remembering and acting on the past? These unanswerable questions permeate Other Lives, and come to a head as Myriam laments the dead:

Much like the threshold of the family home Myriam returns to Lebanon to reclaim, she never manages to cross the threshold of the devastated Beirut she comes back to, begging the question of what it means to return. “Which story do I begin with, when they’re all my stories? I return for all of this, but I don’t know that every return is a disappearance, because the past never returns. A return is only another sign of absence,” Myriam narrates. Return in Other Lives fluctuates much like the other aspects of the novel: both Myriam and Nour, the man she meets on the plane and forms a relationship with, return to Lebanon to search for different things—yet each only find faltering trails of what they seek.

Nour, a Lebanese and Palestinian man who grew up largely out of the country, is attempting to rediscover his roots. Upon meeting him for the first time, Myriam dryly remarks that “roots are something that we ourselves re-fabricate and completely modify, just as when we prepare food, we add spices according to our tastes,” foreshadowing Nour’s defeat. Myriam herself, however, also fails in the goals of her return: she attempts to reclaim the family home but never steps foot in the door; she searches for a memory of the war but finds reluctance and forced normalcy instead; she looks for closure with Georges but realizes she will never have an answer to what happened to him. While she does experience sexual pleasure for the first time in years, and notably only in the city where she was once able to conceive a child, the circumstances of Nour’s failed return end their relationship. Most significant of her failed returns, and perhaps most revealing of her fear of settling down elsewhere, is her search for the doctor who performed her abortion to hear from his mouth that she once did have a child living inside her. The news of his death forces Myriam to accept her infertility, highlighting the incongruity between what one expects from a place upon return and what one ultimately finds.

Haunted by her sporadic experience of time and tormented by the lack of explanation for what happened to Georges and her fertility, Myriam learns that she must come to terms with her inability to return to the Beirut she wants to exist. “When we leave we die a little death. We die in peace,” she reflects after her relationship with Nour ends and she decides to remain in Beirut instead of moving back to Kenya. “And we leave in peace. Parting is not simply a little death, it’s returning to the selves that we’d forgotten in the exuberance of passion.” Although the Beirut that Myriam thinks she remembers no longer exists, she can finally return to the memory of herself she had forgotten in her search for happiness.