Home
»
Critical Essays
»
The Time and the Cure: The Moment of The Magic Mountain 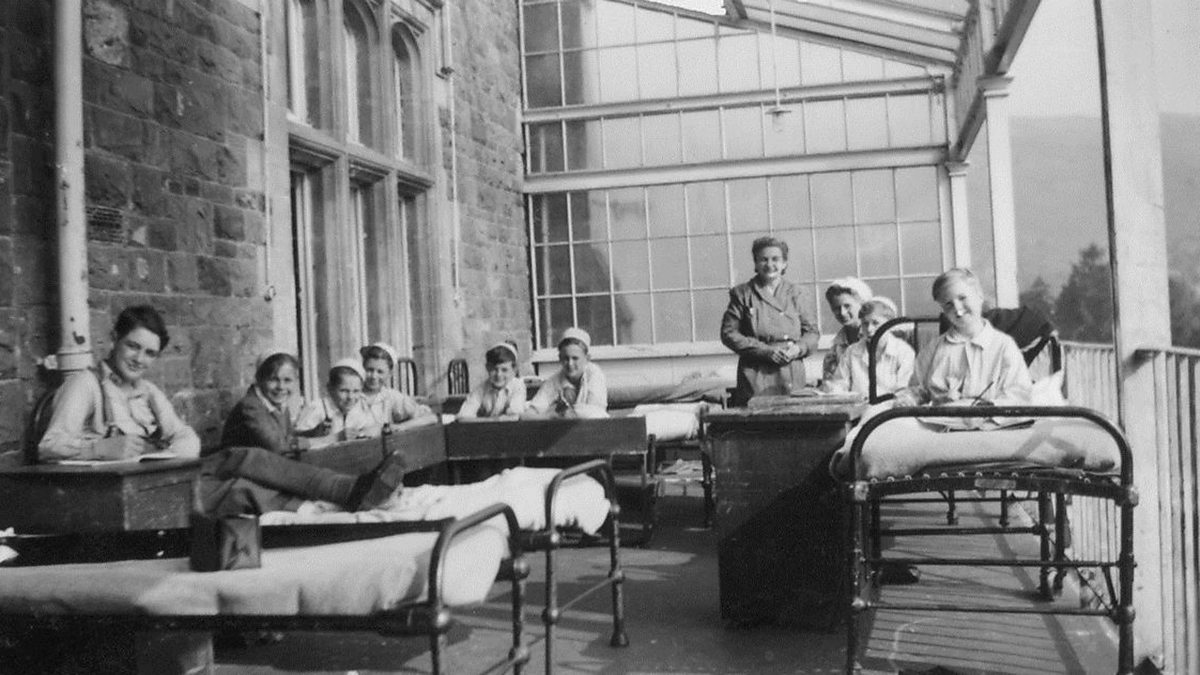 I must begin with a dumb, obvious admission: The Magic Mountain did not cure me. Today, as I write this, my rhythms are just as strange and my thoughts as scattered as they were that day, eighteen months, a minute, or a lifetime ago—I almost cannot tell you how long—when I first began to read Thomas Mann’s novel on the banks of the Landwehr Canal in the first spring of the pandemic. It was not that I expected the novel to, of course. But, for a little while, the famous time-romance gently reshaped my experience of time, offering, if not a cure, a palliative. For a little while, I was carried along by its music, the rhythm of its prose became the rhythm of my thoughts, and there developed a structuring of time that settled the thoughts that the severing of the everyday had let scatter.

Magic Mountain, which tells the story of Hans Castorp’s three-week visit to his consumptive cousin, Joachim Ziemßen, that becomes a sanitorium stay of seven years, is famously about time. Helen T. Lowe-Porter, who first translated the 1924 novel into English in 1927, writes in her translator’s note, “of the author of The Magic Mountain it can be said in a special sense that he has looked into the seeds of Time.” And you are warned from the novel’s very beginning that time is its object. “oh, time—!” exclaims Joachim, a six-month veteran of the sanitorium, correcting Hans, who thinks half a year is a long time. “You’ll learn all about it,” Joachim tells this newcomer to the world of the ill. Time takes on different rhythms here: “One’s ideas get changed.”

But, despite time being such a central concern of the novel, when I chose it to read I did not have in mind that it was a novel about time. I thought of it as the pinnacle of the German tradition of bildungsroman—a novel about a character’s education. I knew of it as a novel of ideas, built out of long discourses about philosophy and politics, psychoanalysis and x-rays. I considered it could be a novel of isolation. And I knew it to be a novel about illness—bacterial illness, it is true, but one whose mysterious spread also demanded a different mode of living. I read it, admittedly, thinking it might be appropriate to the moment.

When I started reading the novel last April, it did seem to capture something of the past month’s experience. I had, like many of us, already learned something about time’s impossible elasticity. The long—and yet short—month of March, in which those of us lucky enough not to have to man the spuckschutzscheibe of the supermarkets and corner stores instead hunkered down in our apartments and rooms, waiting for when it was safe to return to what had been “life,” readied me for Mann’s definition of “tedium” as “an abnormal shortening of the time consequent upon monotony.” With the world outside forsworn, all my days before the computer became an endless, eternal plain stretching out in mirrored Mac windows. When Mann writes about Hans’s early days of tedium, sentenced to wait in the sanitorium until his “moist spot” dries up, I couldn’t help but feel a resonance with the early days of lockdown:

It was evening—and had just been morning. The day, artificially shortened, broken into small bits, had literally crumbled in his hands and was reduced to nothing: he remarked it to himself with a start—or, at any rate, he did at least remark; for to shudder at it was foreign to his years. It seemed to him that from the beginning of time he had been lying and looking thus.

The novel, however, does not merely seek to describe time. It names itself a zeitroman, or time-novel, because it is a novel that reflects on time’s function within narrative. The chapter that most explicitly takes on the subject of time—chapter seven, “By the Ocean of Time,”—opens with the grand inquiry, “Can one tell—this is to say, narrate—time, time itself, as such, for its own sake?” The novel answers that such an idea is “absurd,” because what would there be of time to tell but what happens within it? It does, however, go on to qualify its first dismissal, admitting that the idea of a “tale about time is not such an absurd idea as it just now seemed.”

In this chapter, the narrator describes two different timescales at work in a novel, or in any story really; he contrasts these scales with instrumental music, which he suggests can only and always be as long as itself: “a narrative must have two kinds of time: first, its own, like music, actual time, conditioning its presentation and course; and second, the time of its content, which is relative, so extremely relative that the imaginary time of the narrative can either coincide nearly or completely wit the actual, or musical, time, or can be a world away.” Just as within the music that can be broken down into its notes, so can a novel be broken down into its sentences. And it is Mann’s sentences that ran through my head, one after another, as his characters argued about reason versus irrationality, or spoke panegyrics to “fleshly desires.” There was now an alchemy of my thoughts, which took on some of his measured tones, even when I was away from the novel. In other words, I became infected with his prose.

I think there was a way in which I knew this would happen before I read the novel. Throughout the pandemic, I was seeking out an exploration, or explanation, of time. At first I sought films, because I was too scattered to read, that took on time, almost obsessively, as their theme: La Jetée, The Great Beauty, Last Year at Marienbad, Vertigo, Brideshead Revisited. In these reflective films, I looked to find in their contemplation of the past a new rhythm for the present in a world that had unsettled me—and left my attention unfixed and wavering. Magic Mountain, at 716 pages, is a trial of attention. It is also one form of a solution to this crisis, soothing the constant inflammation of desire and vision that is the virtual city of the Internet, where I otherwise spent my pandemic days.

In a 1953 essay that first appeared in The Atlantic, and which one can find appended to many of today’s editions of The Magic Mountain, Thomas Mann explained to his American audience “The Making of The Magic Mountain.” He describes the novel’s genesis in his wife’s stay at a sanitorium in Davos, Switzerland when she had a “lung complaint.” Mann visited her for three weeks, during which he came down with a cold and a doctor there diagnosed him with a “so-called moist spot in my lung.” He was urged to stay on and “take the cure.” He refused. Mann diagnosed, in turn, “a sort of substitute existence” that occurred at the sanitorium, which threatened to “wean a young person from actual and active life.” “Everything there,” he writes with his usual cattiness, “including the conception of time, is thought of on a luxurious scale.”

I was surprised by Mann’s description of Magic Mountain’s sanitorium. Though Mann calls it some sort of “substitute existence,” Hans ultimately comes to—even within, or maybe because of, the confines of the sanitorium—build his own world of meaning. Originally an engineer, he becomes during his stay in the mountains an intellectual learned in all the disciplines of the modern university—literature and psychology, anatomy and botany, political science and philosophy, to name only a few of the subjects through which his conversations and thoughts range—learning from the various personages he meets on the mountain, including the humanist Settimbrini, the beloved Chauchat, the radical Naphta, and the hedonist Peeperkorn. In the heights he contemplates the questions at the center of how to live the good life, giving substance to Mann’s ersatz. And then, fatefully, in 1914, he enlists in the army and descends from the mountains to die not from tuberculosis but from, a reader must assume, a whistling mortar.

The novel’s education, its bildung, is thus not for some future, a preparation for proper service in society, as the genre traditionally has it. But rather, it is an education in its truest sense—for itself, or, rather, as the deepest possible experience of that moment for itself. There is something structurally equivalent in Walter Pater’s aesthetic experience, as he describes it in Studies in the History of the Renaissance (1873): “For art comes to you proposing frankly to give nothing but the highest quality to your moments as they pass, and simply for those moments’ sake.” Reading Mann’s sentences in the depths of the pandemic was to be granted such experience—or, at the very least, a new musical rhythm, allowing for a bit of stillness amidst chaos to enter in, if only for a moment.