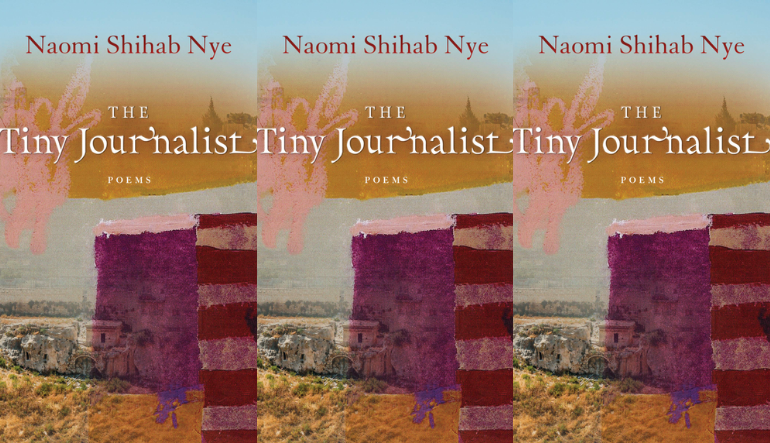 Naomi Shihab Nye’s latest collection of poems, The Tiny Journalist, is a meditation on the state of world affairs, with special attention paid to the current hardships faced by Palestinians near and within the West Bank and Gaza Strip. Using both her own connection to the country—her heritage and her Palestinian father’s journalism career as a BBC reporter—and the youthful voice of Janna Jihad Ayyad, “the tiny journalist” (she begins her career at age seven) for whom the collection is named and who represents the future of Palestine, Nye makes the reader intimately aware of the suffering of Palestinians. Nye’s work as a creative reporter is to convey the Palestinian struggle both through the eyes of Janna, adult Palestinians, and Palestinian Americans alike, who must witness and respond to the struggle.

The collection is split into two parts. Some of the poems in the first part are spoken through the perspective of someone like Janna, a child awakening to the horrors of war and the instability it brings who desires not to be forgotten by the rest of the world. The collection opens with “Morning Song,” a poem dedicated to Janna. Janna is both a child who “would prefer the world / to be pink” and an individual with a unique vantage point. She can see what adults cannot, and “feels the rising fire / before anyone strikes a match.” It is this vantage point that readers are asked to inhabit in Part I. For example, in “Separation Wall,” referring to the West Bank Barrier, the young speaker of the poem opens with a simple image: “When the milk is sour, / it separates.” Though the conflict she refers to is weighty and complex, from the child’s perspective, it is somewhat unintelligible. The speaker’s main concern is protecting younger children from understanding the true nature of the wall: “I would like / them to believe on the other side of the wall // is a circus that just hasn’t opened yet. Our friends, / learning how to juggle, to walk on tall poles.” It is notable that the term “separation wall” is a translation of the Hebrew reference to the wall, as opposed to the Arab term, and that the speaker is able to call the Israeli people on the other side “our friends,” if only in an imaginative act. In the young speaker’s voice, there’s a frank hope for the humanity of people, in spite of the devastating realities experienced living in the midst of conflict.

This voice is less present in Part II, where adult voices more often permeate the poems. Like Part I, Part II opens with a poem in reference to Janna entitled “Facebook Notes.” In it, the speaker tells Janna, “We carry you with us wherever we go, / folded document of hope, unfolded flag, / unburdened alphabet, asking why.” Compared to the adults, Janna’s youth is what allows her to be so bold in her activism and journalism. The adults, as is clear through the voices in this section, are worn down; they have more to lose and more to grieve. The speaker of the second poem in Part II, “Mediterranean Blue,” reflects on immigration—a reality for many displaced Palestinians who have lost their land to the conflict:

My father couldn’t swim either. He swam through

sorrow, though, and made it to the other side

on a ship, pitching his old clothes overboard

at landing, then tried to be happy, make a new life.

But something inside him was always paddling home,

clinging to anything that floated—a story, a food, or face.

Intense grief is a motif throughout The Tiny Journalist. Palestinians are living lives of sorrow—sorrow because their  land has been taken, sorrow at the lack of peace, sorrow because other nations either do nothing or actively support Israel. While the child’s voice addresses these painful realities with questioning wonder, the adult voices express anguish. In “Regret,” the speaker is weary: “Excuse us     this is not the life / we would have made or the way / we would have welcomed you / tear gas billowing in our streets.” The poem ends with “We are so tired,” an exhaustion deepened by the current events documented in this section: the death of an adult speaker’s father, the election of Donald Trump, and the memory of a land and people no longer present. In “Stay Afloat,” the speaker calls on readers to look to the child as a beacon of hope for the future:

Find a child to be your leader now.

Announcing the swish of every passing bus.

Bow down to his love.

Babies say, Mine, mine, but babies are kind.

While Janna confronts Israeli soldiers with her “unburdened alphabet” and climbs into trees to get footage of the conflict in action, an adult voice ponders that babies “don’t know how empty // the cup of hope can feel,” that there exists “a thirst so great / you could die every night, longing / for a better life.” The poignancy of The Tiny Journalist comes from this exploration of voice—of those who have been fighting for a long time who fear things will never get better, and those who have just entered into consciousness of the conflict and are determined that they will.

Nye’s melding of voices in The Tiny Journalist is an activism of its own. Not only does this decision create a space for Palestinian mourning, it also actively works to shatter an us versus them mentality with regard to the Palestinian-Israeli conflict. The poem, “Jerusalem,” begins, “Not your city— / everyone’s city. / Not my city— / everyone’s city,” and “In Some Countries” highlights the need of Palestinians to be seen as people: “We need basics, starting small. / Hello, you look like a human being to me.” This collection encourages readers to hear, see, and feel the long-suffering of a people Nye intimately knows. The question left to readers is how will we respond.