Home
»
Critical Essays
»
The Trauma of the Everyday 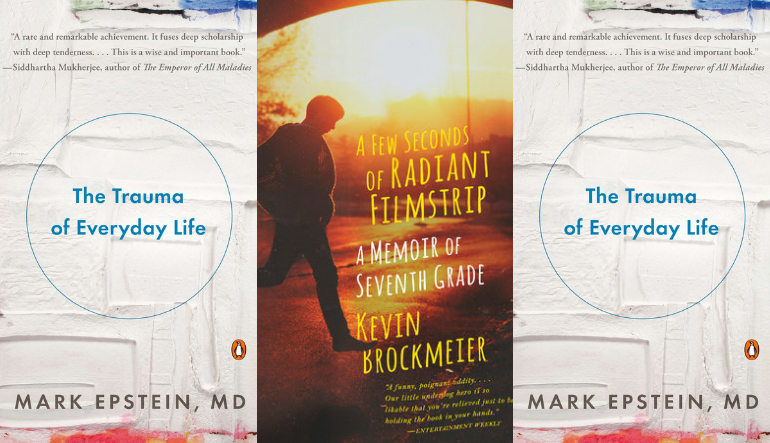 In his book The Trauma of Everyday Life, Buddhist psychotherapist Mark Epstein argues that the first step toward self-discovery, healing, and peace of mind, is to acknowledge that we all carry some form of trauma with us; that, in fact, living is trauma. Building off of the basic Buddhist concept of “Dukkha”—the inherent distress that comes with the knowledge that pain is out there and that pleasure is merely temporary; that everything in the world, including us, inevitably ends—Epstein argues that being human is, by default, a traumatic experience.

This notion has moved in and out of my mind for some time now—the idea that to acknowledge the imminent dissatisfaction of bad things happening and good things ending does not have to be ungrateful or whiny. That it could actually be liberating to say outright: life is always a challenge, even when one is overall healthy and happy. That coming to terms with this truth can actually make one happier, kinder, and more creative. That appreciating beauty is not the antithesis of predicting its demise. That noting life’s negatives can emphasize its positives.

Epstein points to adolescence as the time when the lion’s share of anxiety begins. Like a tightrope walker crossing the abyss between childhood and adulthood, teenagers attempt to remain upright by not looking down. Ignoring the profundity of the present moment; distracting themselves with worry about the future and nostalgia for the past; and living with overworked self-criticism mechanisms makes them feel agitated and unnatural, “flapping like a fish thrown on dry ground,” to quote the Buddha.

A magnificent illustration of this everyday adolescent trauma appears in Kevin Brockmeier’s A Few Seconds of Radiant Filmstrip: a Memoir of Seventh Grade. The book crackles with the specificity of the 1980s—the music, the fashion, the snacks—and the angst of early adolescence; in it, Brockmeier proves that a writer who is attuned to the pain of common experience and who has an ear for gorgeous prose and an eye for vivid descriptions can make heartrending magic out of an utterly mundane trauma: seventh grade.

Disappearing in hallways full of older kids. Being helplessly in love with girls who hardly know your name. An unrelenting, sometimes toxic horniness. Feeling ugly, awkward, and unfashionable. Returning from a summer away only to discover that the things that had once made your friends like you now cause you to be mercilessly teased. All of these experiences make adolescence what it is: a hopeless attempt to pass as human. That is the hardship that this memoir has to offer, and the pain of it is made all the more poignant because it is so deeply recognizable.

Rather than try to soothe his burns, Brockmeier allows himself to stay aflame. Epstein, for his part, claims that what helped him step out of the chaos of his mind and into the present moment was the acknowledgment that his predicament was universal, and—in spite of an imploration from the grownup world to snap out of it—quite real.

“Trauma happens to everyone,” he says:

The potential for it is part of the precariousness of human existence. Some traumas—loss, death, accidents, disease, and abuse—are explicit; others—like the emotional deprivation of an unloved child—are more subtle; and some, like my own feelings of estrangement, seem to come from nowhere. But it is hard to imagine the scope of an individual life without envisioning some kind of trauma, and it is hard for most people to know what to do about it.

The thing to do, according to Buddhism, is sit with it. Be it in the form of meditation, conversation, or creation, coming to terms with the trauma can not only take the sting out of it, simplifying it into something one can carry without collapsing—it can make it into something worthwhile for others, as well. As writers learn throughout their career, the best thing to write about is that which burns inside of them. It can be the smallest memory, the most minute offense, the tiniest fear. But if it’s there, burning inside of you, making its way into your writing even when it shouldn’t rightfully belong there, it can become beauty.

“The truth is he spends thirty minutes of every hour suspecting he has missed some essential clue about himself,” Kevin Brockmeier attests as to his young self.

And not only himself—he has a recurring fantasy that one night, while he was asleep, the entire world was transformed into an alien planet, but no one bothered to tell him, and he didn’t have the instinct to figure it out, and here he is now on a wild new Earth, walking around like an imbecile, as if everything he knows hasn’t fallen away behind him like a river plummeting over a precipice.

The world of Brockmeier the adolescent is on fire, and so is ours. “The fires of greed, hatred, and delusion are defenses against acknowledging that everything is on fire, instinctive attempts at protecting ourselves from what feels like an impossible situation,” says Epstein. The more we fight against it, the more we burn. Perhaps if, like Brockmeier, we let our whole world go up in flames, what we have to say—and to give—will shine ever more brightly.