Home
»
Reading
»
The Unbearable Lightness of Being a Great Tennis Player: Looking Back at Foster Wallace on Federer 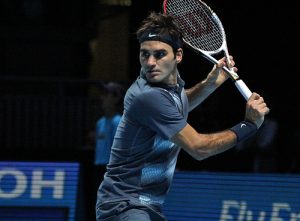 Roger Federer: Temporal being or beams of light?

Under Review: “Federer as Religious Experience,” article by David Foster Wallace for New York Times, August 20, 2006. Collected in Both Flesh and Not: Essays (Little, Brown and Company, 2012, 336 pages). On July 6th, Swiss tennis player Roger Federer lost the final match in this year’s Wimbledon men’s tennis tournament, to the Serbian tennis player Novak Djokovic. Even though Wimbledon is tennis’ most legacy-steeped and prestigious tournament, this hardly seems like news to people, like myself, who only peripherally follow tennis.

From afar, it seems like Federer, or Djokovic, or the muscular Spaniard Rafael Nadal, or the gangly Scotsman Andy Murray are constantly facing one another in the finals of every men’s tournament, and have done so for a full decade. Each of these players have enough trophies in their possession that it could, conceivably, be quite hard for them to summon the necessary burnin’ in the bosom to stave off the success-hungry players in each tournament’s early rounds. Could Federer have truly been disappointed to lose this year’s Wimbledon when he has already won the tournament seven times before? Could Djokovic have been that elated to beat Federer, with July 6th’s match being the 35th (and far from the last) match-up between the two players? My flippant attitude towards this endless march of tournaments is one of the many, many reasons that I am not a professional tennis player.

Having never submitted myself to the soul-testing rigors of top-flight training—training that is totally necessary in order to be a fringe hopeful at maybe someday becoming a first-round sacrifice to a top-seeded player at the very beginning of one of these tournaments—I have absolutely no clue how totally invaluable it is to these men to secure eight, and not just seven, Wimbledon trophies. Their lives have been, since childhood, a continuous and total pursuit of the very limits of what they are capable of achieving.

One man who appreciated the supreme levels of accomplishment from anybody and everybody involved in professional tennis is the late, great David Foster Wallace. Once ranked in Illinois as a promising adolescent player, Foster Wallace dedicated supreme amounts of his upbringing to pursuing greatness in tennis, and despite his legitimate skill, his progress hardly made a dint in one of America’s most tennis-poor regions. As a result, Foster Wallace the essayist was always, always interested in turning his journalistic assignments into opportunities to ogle over the skill and talent of professional tennis players. Few walking the earth can fully absorb the impossibility of talent inherent to professional-level tennis—and out of that microscopic population, nobody was as well-equipped to put those feelings onto paper. Foster Wallace’s best piece about tennis was a 2006 appreciation of Federer that he wrote for the New York Times. As Federer climbed through this month’s tournament, I am not the only person who was reminded of Foster Wallace’s tennis writing. But his reflection on Federer—not to mention his extensive descriptions of the Enfield Tennis Academy in Infinite Jest—are not the complete ouevere of Foster Wallace’s tennis writing.

While Foster Wallace’s 1998 collection of essays, A Supposedly Fun Thing I’ll Never Do Again, is best-known for the eponymous essay in which Foster Wallace spends a week traveling on a cruise ship, just as fascinating and re-readable, in my eyes, is another essay collected in the book entitled: “Tennis Player Michael Joyce’s Professional Artistry as a Paradigm of Certain Stuff about Choice, Freedom, Discipline, Joy, Grotesquerie, and Human Completeness.” Unless you’ve already read this essay, the name Michael Joyce will only be familiar to readers who were intense and exhaustive fans of professional tennis in the nineties. In blunt, marco terms, Joyce accomplished nothing in professional tennis, the apex of his career being briefly ranked among the world’s top one hundred men’s players, which means getting intermittently smoked by elite players in the beginning rounds of tournaments. But, through the eyes of Foster Wallace, the tennis insider, we “see” that Joyce’s abilities at tennis approach the miraculous. His precision is beautiful while being robotically consistent. His shots sizzle at unimaginable speed without losing an inch of precision. And Michael Joyce, in his prime, would probably be very easily dusted by even an off-kilter Federer.

And so in Foster Wallace’s essay on Federer, in which he examines the very uppermost rungs of the tennis world, Foster Wallace is not totally getting swept up in hyperbole when he describes Federer’s play, repeatedly, as something akin to “religious experience.” Foster Wallace’s appreciation of tennis’ elite does not mean that he suddenly scoffs at the handiwork of tennis’ comparatively blue-collar middle class. In a very informative passage in the Federer essay, Wallace, in attendance at Wimbledon, describes how watching tennis on TV “is to live tennis pretty much as video porn is to the felt reality of human love.” Specifically, Foster Wallace argues that the conventional angle of televised tennis skews “the sheer physicality of top tennis”:

The dimension that’s lost (or rather distorted) on the screen is the real court’s length, the seventy-eight feet between baselines; and the speed with which the ball traverses this length is a shot’s pace, which on TV is obscured, and in person is fearsome to behold. That may sound abstract or overblown, in which case by all means go in person to some professional tournament—especially to the outer courts in the early rounds, where you can sit twenty feet from the baseline—and sample the difference for yourself. If you’ve watched tennis only on television, you simply have no idea how hard these pros are hitting the ball, how fast the ball is moving, how little time the players have to get to it, and how quickly they’re able to move and rotate and strike and recover. And none are faster, or more deceptively effortless about it, than Roger Federer.

Respect is given all-round: admiration to the mid-level players and awe for Federer. In the book Both Flesh and Not, this essay has been retitled “Federer Both Flesh and Not.” But that phrase actually doesn’t appear anywhere in the essay, verbatim. The phrase that does appear is this:

Like Ali, Jordan, Maradona, and Gretzky, he [Federer] seems both less and more substantial than the men he faces. Particularly in the all-white that Wimbledon enjoys getting away with still requiring, he looks like what he may well (I think) be: a creature whose body is both flesh and, somehow, light.

What I take to be proof of Foster Wallace’s transcendence as a writer is that, even though he should by all means be a novice at sports journalism—he does actually interview Federer as a journalist but that part is only discussed, duh, in the footnotes—in his quick foray into the subject he digs out themes and meaning that lifelong practitioners of sports journalism wouldn’t have stumbled upon if given a second lifetime to do so. In the Federer essay, that theme is our mortal bodies and how Federer, despite having one, appears to very often not have one:

Beauty is not the goal of competitive sports, but high-level sports are a prime venue for the expression of human beauty. The relation is roughly that of courage to war. The human beauty we’re talking about here is beauty of a particular type; it might be called kinetic beauty. Its power and appeal are universal. It has nothing to do with sex or cultural norms. What it seems to have to do with, really, is human beings’ reconciliation with the fact of having a body.

And so this is the way that, in a sport with such goofy and densely elitist practices as tennis, that something as insignificant as watching this one particular tennis player can become religious experience—or at least something astonishingly close to religious experience. With the body transcended, perhaps this is what the human spirit looks like.