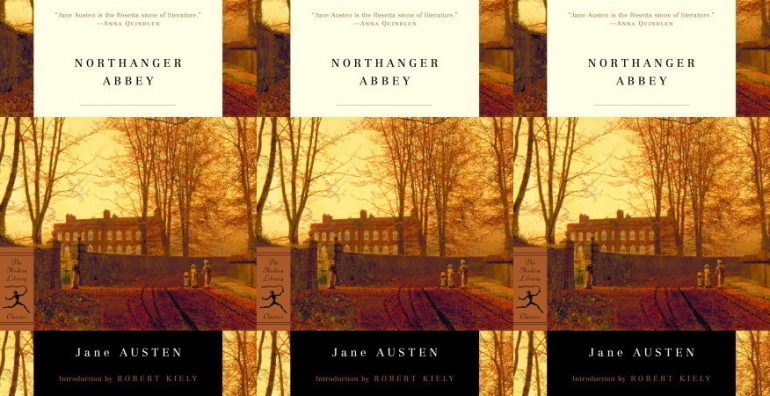 “No one who had ever seen Catherine Morland in her infancy would have supposed her born to be an heroine,” begins Jane Austen’s Northanger Abbey. Catherine is so unlike a conventional heroine, in fact, that the narrator takes nearly the entire first chapter to marvel at how remarkable she is in this role, given just how unremarkable she is as a girl. In her childhood, for example, Catherine was neither particularly clever nor talented; nevertheless, “she had neither a bad heart nor a bad temper, was seldom stubborn, scarcely ever quarrelsome, and very kind to the little ones, with few interruptions of tyranny; she was moreover noisy and wild, hated confinement and cleanliness, and loved nothing so well in the world as rolling down the green slope at the back of the house.” As compared to any other girl of her time (or of ours), Catherine is perfectly ordinary; only when compared not just to late eighteenth-century heroines in general, but also to Austen heroines specifically, does Catherine appear extraordinary for her being so unexceptional. Catherine lacks the emotional fortitude of Elinor Dashwood and Anne Elliot, the perceptive wit of Elizabeth Bennet, the hyper-confidence of Emma Woodhouse, and the quiet wisdom of Fanny Price. She is utterly naïve, and insight comes to her slowly.

Catherine’s naiveté is unsurprising, given that she has little experience of the world beyond the small village of Fullerton (comprising forty or so families) until she is invited to go to Bath with neighbor Mrs. Allen and her husband, who owns most of the property around the village. (The Morlands are a family of more modest means: Catherine’s father is a clergyman, and she is the fourth of ten children.) In Bath, Catherine’s education in the ways of society begins. There, she develops her first crush on Henry Tilney, whose witticisms both charm and elude her; makes her first frenemy, Isabella Thorpe, whom initially (and for a long time) she believes to be a true friend; and attracts her first suitor, Isabella’s brother John, whose courtship she fails to recognize as such.

Catherine’s interactions with Isabella show just how little she comprehends of the ways of society. She does not recognize the manipulations of her friend, whose relentless self-flattery rivals that of Mrs. Norris in Mansfield Park (though without Mrs. Norris’ cruelty). “‘I wish you knew Miss Andrews,’” exclaims Isabella one afternoon at Bath’s fashionable pump-room. “‘I think her as beautiful as an angel, and I am so vexed with the men for not admiring her! I scold them all amazingly about it.’” Isabella is exaggerating, but Catherine takes her claim literally. “‘Scold them! Do you scold them for not admiring her?’” Isabella continues in her effusive mode: “‘Yes, that I do. There is nothing I would not do for those who are really my friends. I have no notion of loving people by halves; it is not my nature.’” Wittingly or not, Isabella’s vain self-characterization is inaccurate—four sentences after claiming that her attachments “‘are always excessively strong,’” Isabella tells Catherine that she “‘must confess there is something amazingly insipid about’” Miss Andrews. Catherine, however, seems not to notice the discrepancy in Isabella’s various claims about Miss Andrews; is she an “angel” deserving of admiration, or is she “insipid”?

Because she is unaccustomed to a society in which the things people say do not literally match up with their true feelings and intentions, Catherine takes her friend at her word—even when her friend’s words are contradictory. If Isabella says that she scolds men for not admiring a friend, Catherine understands that Isabella really does scold them, and if Isabella says that her attachments “‘are always excessively strong,’” Catherine understands that Isabella really does have strong attachments. This tendency to take what others say literally leads her to misinterpret what is happening right before her very eyes. For example, one evening, when Isabella (by now engaged to marry Catherine’s brother James) says that dancing is “‘quite out of the question,’” Catherine takes her to mean that she does not want to dance. When Henry’s brother Captain Frederick Tilney joins their party and protests “against every thought of dancing,” Catherine takes him to mean that he, too, does not want to dance. That Captain Tilney and Isabella do end up dancing together Catherine attributes to “good nature” on his part and politeness on hers—not seeing that they are actually flirting with each other.

Henry’s view of Catherine’s misperceptions is as insightful as it is forgiving. In response to Catherine’s mistaken view of what is going on between Captain Tilney and Isabella, he notes that when considering the motives of others, Catherine asks herself not, “‘How is such a one likely to be influenced?’” but rather, “‘How should I be influenced, what would be my inducement in acting so and so?’” In short, Catherine’s theory of mind is flawed. She imagines that the minds of others are much like her own: straightforward and full of goodwill. Catherine seems to be aware of this fault, though she does not fully understand it. In response to Henry, she admits, “‘I cannot speak well enough to be unintelligible,’” implying not only that she is unable to play the game of saying what she does not really mean but also that she finds others—those who “speak well” and are thus more sophisticated than herself—“unintelligible.” Rather than criticize her for this incapacity, Henry compliments Catherine; her finding the contradictions in others’ words and actions to be unintelligible is due, he says, to her “‘being superior in good nature yourself to all the rest of the world.’” These may be the flattering words of a young man falling in love, but their attribution of Catherine’s confusion to her good nature rather than to foolishness rings true, particularly because by the end of the novel, she does begin to find other people intelligible.

It takes another change of setting, however, from Bath to Northanger Abbey for Catherine finally to begin to perceive the distinction between her naïve understanding of the world and what is really going on. Northanger Abbey is Henry’s home, where Catherine is invited to stay as the companion of Henry’s sister Eleanor, another of Catherine’s friends in Bath. There, Catherine’s model for interpreting her experiences changes. In Bath, Catherine interprets events according to her own good-natured character (as Henry points out) and what she knows from her limited previous experience. In Northanger Abbey, on the other hand, she interprets events not according to her own character and experience but according to the conventions of such works of Gothic fiction as The Mysteries of Udolpho by Ann Radcliffe. Thus, instead of taking everything literally, Catherine lets her imagination run wild. Even before arriving at Northanger Abbey, she is “elated to rapture” by the idea that its “long, damp passages, its narrow cells and ruined chapel, were to be within her daily reach, and she could not entirely subdue the hope of some traditional legends, some awful memorials of an injured and ill-fated nun.” Upon arriving, she endures a night of terror, haunted by what she fears a cabinet in her bedroom must contain (nothing but a laundry list, it turns out). And as the days pass, she begins to entertain the idea that General Tilney, Henry and Eleanor’s father, murdered his wife.

It is after Henry disabuses her of this outlandish notion that Catherine is “completely awakened.” Henry’s assertion that anyone with an English education is unprepared to commit such “‘atrocities’” as murdering one’s wife is certainly nonsensical, but upon reflection, Catherine takes up a similar view, concluding that “among the English . . . in their hearts and habits, there was a general though unequal mixture of good and bad.” At any rate, this turns out to be a fairly reliable expectation of the people within one’s acquaintance, who for Catherine happen to be English: that they will be neither so persistently good as Catherine initially assumed nor so flagrantly bad as Radcliffe’s novels encouraged her to imagine.

With her newly calibrated expectations of others, Catherine is finally able to account for their bad behavior, such as Isabella’s. After Isabella calls off her engagement to Catherine’s brother in favor of another young man who promptly jilts her, Isabella writes to Catherine seeking help in patching things up with James; Catherine, at last, sees through Isabella’s lies. “‘So much for Isabella,’” she declares, “‘and for all our intimacy! She must think me an idiot, or she could not have written so; but perhaps this has served to make her character better known to me than mine is to her. I see what she has been about. She is a vain coquette, and her tricks have not answered. I do not believe she had ever any regard either for James or for me, and I wish I had never known her.’”

And so, in the end, Catherine is (as she herself comes to see) a far better judge of character than her more sophisticated ex-friend Isabella. Though Catherine Morland may be neither Austen’s cleverest nor her wisest heroine, the story of how her naiveté is transformed to discernment is no less compelling, showing that understanding others takes a combination of good faith and imagination, tempered by experience.