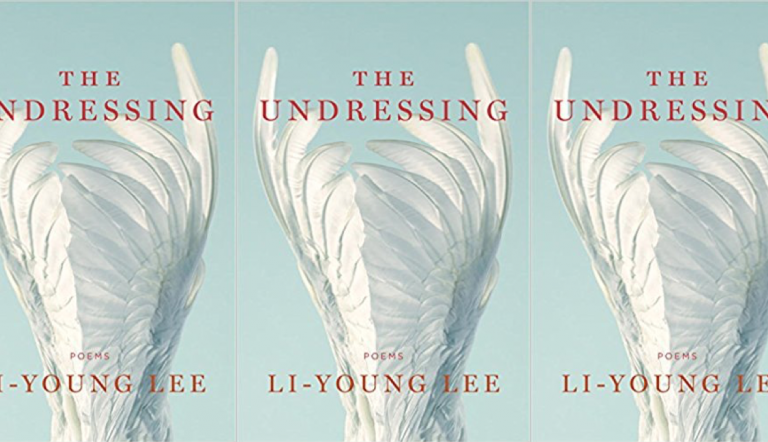 “The first duty of love is to listen,” Paul Tillich advised, and the attendant duties of love are also the real subject of Li-Young Lee’s stunning sixth book, The Undressing. No surprise then that “Listen” should be the first word of this collection. The lengthy, opening title poem begins with the speaker apparently more interested in undressing his lover than he is interested in listening to her: “I unbutton the top button of her blouse/and nibble her throat with kisses/Go on, I say, I’m listening.”

It is a bold move to open with such a sensual poem, but it is quickly clear this poem is not “just” a love poem. It’s also about the personal relationships between author and speaker(s) and audience, between the present and the past, and even human beings to language since “The world/is a story that keeps beginning” and every word “has many lives.” Because this collection is obsessed with language—its necessity and its limits—Lee brilliantly engages with a polyphony of voices to undress (and address and redress) words. It is an intensely personal investigation, a truly great mind in dialogue with itself and with the universe.

For Lee, the personal is always inextricably linked to the historical and even to the divine, and throughout this poem, “the lover’s voice” sounds oracular: “In love, we see/God burns hidden, turning/inside everything that turns./And everything turns./Everything is burning.”

Our only hope, he argues, is to listen so that “our voices shelter each other/figures in a dream of refuge/and sanctuary.” This is why the speaker, thinking of his beloved, says:

inside her is the safest place to be.

Inside her, with all those other mysteries,

But, such refuge is just a dream, since: “For 20,000 years, human groups have thrived/by subtle and not so subtle mechanisms/ of expulsion, exclusion, rejection, elimination and murder.” All we have is each other, our voices and our language. “The war is on./If love doesn’t prevail,/who wants to live in this world?/Are you listening?”

The middle sections of the book often read like memoir (and Lee has already written an eloquent memoir, The Winged Seed). His early life was extraordinarily fraught: Lee was born in Indonesia, where his Chinese parents (his grandfather was Mao Zedong’s personal physician) lived in exile. His father spent time in a labor camp in Macau and the family fled anti-Chinese sentiment, living in Hong Kong and Japan before ultimately settling in Chicago. Here, biographical details illuminate the jump from the personal to the universal and back again. In “Our Secret Share,” for example, a poem written at times in prose paragraphs, Lee discusses revolution and violence, starting with Thomas Jefferson, the Crusades, Lenin, and Nietzsche, but soon he focuses on his own experiences: “After nineteen months in prison, eight of those months in a leper colony—and he never got leprosy—my father was unrecognizable to me,” and recognition is clearly necessary for understanding his father’s identity and his own.

Lee is an extraordinarily empathetic writer. He’s fully aware of how much his mother suffered as well, knowing that what his mother “won’t say/and what I’ll never tell/remain our secret share/ of the world’s unread history,/ the unspoken weds the unspoken.” Lee, like his mother, is possessed by the desire to remember and bear witness to the ultimate possession of the dispossessed: the memory of all that is lost.

“Changing Places in the Fire,” a three-part poem that comprises most of the final section of the book, also opens with a female muse, “a sparrow with a woman’s face.” The first section of this poem shouts in Whitmanesque urgency with two dozen exclamation points, and an extended riff on the word “word,” which here means a linguistic signifier; a promise (as in keeping your word); a shibboleth (a password); a holy word (the “word of the lord”); the slang rejoinder that means something like amen, and a declaration of the purity of a single word in opposition to (mere) words. It is a call for and a caution against the lyric since “The Word is the voice of the lamp,/and words are soot blackening the glass.” That the Word is capitalized suggests the divine word, of course, but also the transcendence of exactitude as opposed to the mere accumulation of most language (and here one hears something of Hamlet’s disillusionment: “words, words, words”).

The bird is also an alter ego of Lee, of course, so here the poet screams in self-chastisement, dressing himself down if you will:

You pretend to poetry and destroy imagination!

Your words mystify, mislead, and misdirect!

You ape The Word made flesh with words made words,

to multiply more words and words about your words!

Lee is clearly wary of the limits of language. Perhaps this is why his language in this collection is so syncretic, so wildly alive and allusive with references to anime, science fiction, the Hebrew Bible, Gnosticism, Shakespeare, hip-hop and the gospel of John. The result is a masterpiece.

Gerald Stern, his early mentor, once wrote that Lee’s poetry is characterized by “a certain humility, a devotion to language, a belief in its holiness.” As The Undressing makes clear, such humility is located in the often transitory nature of our time and our truths, and such a belief is surely rooted in listening. Even as Lee sings, he knows that “each thing flourishes by singing/and returns to vanish into song.”