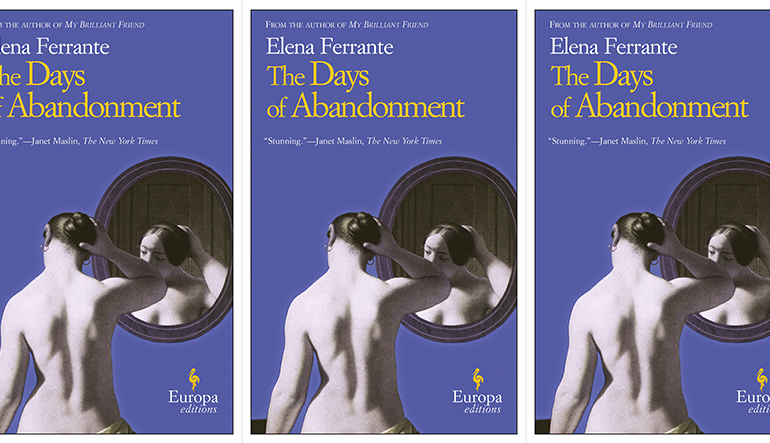 Originally published in 2002, The Days of Abandonment sits uncomfortably in its cultural moment. Elena Ferrante’s examination of the spiraling decline of an abandoned wife resists the hopefulness of the girl-power-era, returning instead to the preoccupations and expectations of a more traditional form of womanhood, and to the controversial figure of the scorned woman. A caricature of embitterment, driven to madness by romantic rejection, the figure of the scorned woman is, traditionally, little more than a stereotype trading on the excesses of emotion and general instability that have long been associated with divergent femininity. Ferrante’s scorned woman, however, is not a stock character or a vehicle for moralization. Olga is fully realized, and her inner monologue elevates the narrative with its unflinching honesty.

What sets Olga apart from the traditional “scorned woman” is that she is the focus of the narrative, not the subplot. Olga has an intellectual and an emotional life, moments of reflection as well as moments of reaction. As readers, it is her voice we hear and her thoughts we follow as events unfold. While the narrative mobilizes many of the traditional aspects of the scorned woman trope—self-neglect, violent revenge, mental breakdown—and often portrays Olga as an unreliable source of information or in an otherwise unsympathetic light, it never does so dismissively. In following her internal life so closely, readers are drawn into the layers and complexities of her situation in a way that invites compassion and understanding rather than derision.

As a younger woman, Olga was more in tune with modern sensibilities. An aspiring writer with dreams and ambitions, she was firmly opposed to women’s over-reliance on men: “Cultured women, in comfortable circumstances, they broke like knickknacks in the hands of their straying men. They seemed to me sentimental fools.” Reflecting on these views from her new position as an abandoned wife with two small children to raise, the contrast between her past and present selves is stark. She has become one of those cultured women her past self so reviled, looking back on the idealism of her youth with a complex mix of emotions borne of experience and regret. Bridging the distance between these two Olgas is her fifteen-year marriage to Mario.

Olga’s initial description of Mario is that “he was a man of quiet feelings, the house and our family rituals were indispensable to him.” From this very early stage, however, we have cause to doubt her assessment. She recalls a time at the beginning of their relationship where Mario left for five days before coming back, embarrassed, claiming that “there had come upon him a sudden absence of sense.” Years later, and just five years before his current desertion, he uses the same phrase to describe his attraction to a school-aged girl whom Olga saw him kissing. These “absences of sense,” which Olga brushes off, speak to aspects of his character and deportment that belie her representation of him as a homely man of quiet feelings. It is clear she has created a narrative to paper over the cracks of her failing marriage.

Olga’s muted reaction to her husband kissing a schoolgirl is some distance from the pronouncements of independence that issued from her younger self. Over the intervening years, Olga has made her voice small: “I had, finally, taught myself to wait patiently until every emotion imploded and could come out in a tone of calm, my voice held back in my throat so that I would not make a spectacle of myself.” The changes in Olga’s personality reveal the extent to which her marriage has robbed her of her own sense of selfhood and agency. What, we may ask, has occurred for her to worry more about making a spectacle of herself than about her husband’s infidelity?

Even without these signals of potential emotional abuse and controlling behavior on the part of her husband, the institution of marriage, for Olga, was not equitable. Indeed, one of the fundamental drivers of The Days of Abandonment is Olga’s gradual understanding that much of the disbelief, desperation, spite, anger, and bitterness she experiences is less for the loss of a man she loved or for a state of existence she cherished than for the loss of herself to a man and to a marriage that wasn’t worthy of that sacrifice:

I made a list for myself of everything he owed me…I had taken away my own time and added it to his to make him more powerful. I had put aside my own aspirations to go along with his…I had disappeared into his minutes, into his hours, so that he could concentrate…And now, now he had left me, carrying off, abruptly, all that time, all that energy, all that effort I had given him, to enjoy its fruits with someone else.

That her rage and anguish is fully justified within the narrative carries the reader through her subsequent actions, which even when appalling remain understandable. This level of justification is not offered to the stereotypical scorned woman.

Ferrante’s portrayal of Olga’s unravelling is likewise depicted with staggering intimacy. Olga’s series of outbursts, both violent and sexual, are told and reflected upon in her own voice. We witness the events—attacking her husband and his new lover, attempting to seduce men she has no interest in—and stay for the aftermath, learning of Olga’s regrets and rationalizations. Where the scorned woman is traditionally condemned by her actions without insight into the underlying causes or the inner life, Ferrante foregrounds Olga’s humanity with all of its flaws, imperfections, and ultimate realness.

This connection to Olga as she goes on to experience a mental breakdown takes the emphasis away from her mental state itself and onto the underlying causes and realities. In taking this character seriously we are forced to face questions about gender relations and the social expectations placed on women. Questions that the stereotype of the scorned woman has traditionally worked to move us away from.

In contrast to many other more contemporary narratives, The Days of Abandonment does not seek to avoid or minimize the pain of a broken marriage by playing into fantasy and wish fulfillment. Ferrante’s novella rejects overly hopeful depictions of female empowerment in favor of a deeper understanding of the less palatable realities of marriage-breakdown for a character in Olga’s circumstances: a mother with two young children who has sacrificed much of herself to a family unit that suddenly breaks. The Days of Abandonment may not feel of its contemporary moment, but it is truthful on a much wider scale.

Tags:Elena Ferrante, The Days of Abandonment