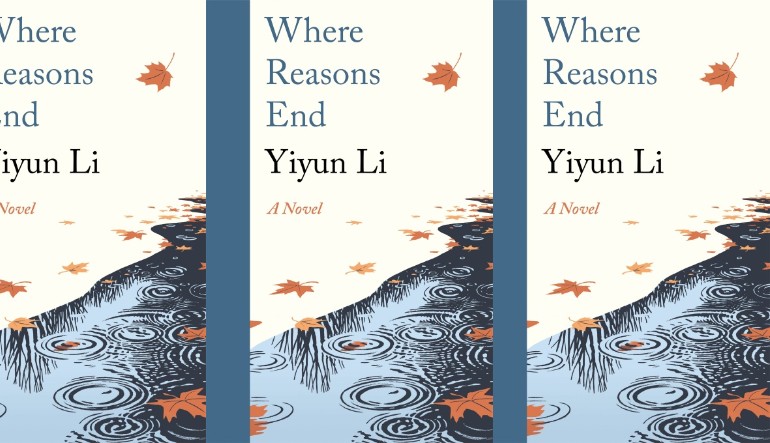 Yiyun Li has said about her writing, “In general, I think I choose situations that fascinate or intrigue or baffle me, and I make up a set of characters to live through those situations so I can understand them better.” She has also said that she has “a list of writers with whom I often carry on one-way conversations in my mind.” A number of her short stories are written in response to William Trevor’s work, as she seeks to put her narrator in conversation with a narrator in a Trevor story. It is perhaps not surprising, then, that Li’s new novel, Where Reasons End, uses conversation as the mode to better explore her narrator’s grief.

Where Reasons End explores the space of a parent’s grief after the death of their child. Nikolai, the narrator’s sixteen-year-old son, has died by suicide; the novel is from his mother’s point-of-view. She is a writer, and she writes a conversation between herself and her son as a way of making it through her days, of working through her grief: “I have allowed myself to make up this world to talk with you,” she says.

As such, most of this novel is in dialogue, in the words exchanged between mother and son. Words, themselves, are often at the heart of their discussion. They talk about the meanings of words, about the ways in which words can be both less than and more than the thing itself. Their conversation moves forward but it also, always, circles back to this subject: ideas and words are revisited again and again.

Each of the book’s sixteen chapters focuses on a particular conversation between the two; it does not seem coincidental that the number of chapters aligns with the age of the son at his death. It is possible to read each chapter in isolation, but the novel accrues meaning as each conversation is layered upon the others. As mother and son talk, the reader is provided with markers of the outside world—weather, seasons, meals—and it’s another way in which the chapters are connected. Time passes out there, moving in a linear fashion, but it works differently in this world that the narrator has created: “Timeless is this world we are making, tenseless its language.”

Talking to the dead, of course, is not anything new or experimental. But such conversation typically takes place in the world of the living; at the request of the living, the dead return to inhabit their old world, to be filled in on the events of the living, perhaps, to be asked for advice. The narrator says that she can imagine both “rewinding life,” to visit memories, and “rewriting life,” to see a different future. But, she says:

…it was what I could not imagine that made the veneer dispensable: the bad dreams he had not told me over the years, the steps he had walked and the thoughts he had gone through on his last day, the adjectives he would have taught me, the days and the years ahead—with or without him. The unspeakable is a wound that stays open always, always, and forever.

In Where Reasons End, the narrator constructs a new space, a space that is for the living and the dead to meet: “It was a world made up by words, and words only. No images. No sounds.”

Although the mother is the one to create the space (“We once gave Nikolai a life of flesh and blood; and I’m doing it over again, this time by words”), Nikolai holds the upper hand here, as he can not only respond to his mother’s words, but also to her thoughts. Her access is far more limited. She cannot go to those places that she cannot imagine. She cannot access his thoughts; she only has his words.

Nikolai will be sixteen forever, of course, and he is often an indefatigable sixteen-year-old, pouncing on his mother every time she says or does something that he finds objectionable. It is clear, from the stories that the narrator recounts, that he was precocious throughout his short life. At first, this is charming, a way to let us access such an intimate relationship. There’s a lightness here, which lifts the novel out of melancholy, as we recognize the back-and-forth between mother and son, as we see the love that they have for each other. In no way does the narrator saint her son after death. But Nikolai often crosses a line: “What pompous nonsense,” he says at one point. “I hate it when you try to sound smart.”

It is fascinating to consider the way in which Li implicates the reader here. We are on the side of the living, after all. We are seeing this world that the narrator has created through her eyes; we are trying to imagine the loss that she is feeling. The way that she creates Nikolai does not ask for our sympathy, though. I found myself increasingly annoyed with him, and even angry at times: how dare he treat his mother in such a manner? Just as she protects him, the reader feels the need to protect her.

We see little anger or even frustration on her part, though. Their give-and-take is based on the give-and-take of a parent-child relationship, developed over the course of the son’s life. By setting up the book in this manner, Li transfers those more negative emotions to the reader. It is an uncomfortable place to be. How can we be angry at someone—a teenager, on the brink of adulthood—who was in such pain that he died by suicide? At one point, the mother, reacting to her son’s inability to accept his imperfections, sets forward a wish:

I wish you had made me an enemy, I said, rather than yourself. Mothers, I thought, would be perfect for that role.

You can’t be that for me, Mommy, Nikolai said. I’ve found a perfect enemy in myself.

And so our emotions ricochet back and forth, mimicking, perhaps, the way that the narrator is feeling as well. She is wise, though, and she understands that anger and sentimentality have no place within this world of grief; over and over, she rejects the cliché as she searches for the truth. She is not content to sit with her inability to imagine. She hands anger off to us, the reader, and forces us to work through these moments. Instead, the narrator focuses on what she knows best to do: she creates a new world as she writes. She asks question after question after question. She is an artist. It is her job to imagine.

It seems clear that the conversations between mother and son will continue long after the book ends:

I thought you said you took forever out of your dictionary.

Once upon a time, I said. You put it back for me.

Almost always in Li’s fiction, even as she portrays the bleakness of the human condition, she is looking for a moment of grace. And here, she does just that. Towards the end, the narrator says, “Words fall short, yes, but sometimes their shadows can reach the unspeakable.” Li helps the reader to look directly at grief, to consider other ways of understanding such an enormous loss through the creation of something new. And in doing so, she makes a beautiful thing, a work of art.