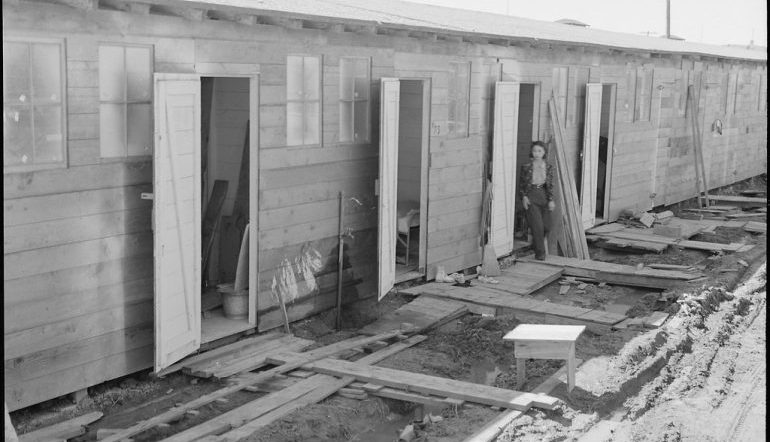 Trump’s recent statement that four sitting members of Congress should “go back and help fix the totally broken and crime-infested places from which they came” before being critical of the United States rang alarm bells for many people of color who subsequently shared their own experiences of being told to “Go home.” Days later, video of Trump at a North Carolina campaign rally showed him criticizing Congresswoman Ilhan Omar of Minnesota in particular—a moment that culminated in the crowd chanting “Send her back.” In the video, we see Trump allowing the chant to continue before resuming his speech.

Such language is racist and dangerously recalls rhetoric used to justify the denial of people’s citizenship and overall sense of belonging. It is crucial to return in particular to Executive Order 9066, which directly resulted in the internment of Japanese Americans during World War II. Failing to understand the significance of how difference—especially perceived racial difference—is articulated and weaponized will lead to a repetition of the same cruelties and mistakes of history.

Julie Otsuka addresses this harmful othering and dehumanization of those perceived as “threats” to the nation—even when those people are themselves citizens of the United States—in her 2002 novel When the Emperor was Divine, which focuses on internment as experienced through the eyes of children. Though readers enter the narrative watching a mother preparing her family’s house and packing up their belongings in preparation for their sudden internment, the bulk of the story is told through the eyes of her children: a girl who, at the beginning of their internment, is eleven and a boy who is eight. Otsuka doesn’t name the characters; throughout the story, the girl is simply referred to as “the girl” and the boy as “the boy.” Even their parents are referred to only as “the mother” and “the father.” This move is deliberate, stripping them of external characteristics in parallel to the way internment reduced them to a single qualifier: Japanese. By referring to these characters as “the girl”, “the boy”, “the mother”, and “the father”, however, Otsuka also humanizes them for readers, demonstrating that below markers of racial difference are aspects of human life that are more important and more basic—this girl could be any girl and this boy could be any boy. It is only the historical moment, and the external judgment of others, that determined that they belong locked away.

Through the children, readers get a raw view of the terrifying precarity of the family’s situation and the long-lasting implications of their traumatic experience. Otsuka highlights the bureaucratic, systematized aspect of this trauma by bringing readers through the process of internment. The children and their mother are not simply bussed to a nearby camp—they have to take an arduous journey to finally arrive where they will be interned for more than three years. They take a train across Nevada from their home in California, going through town after town in a dilapidated car whose windows get broken by bricks thrown through them. As the girl sleeps one night, she is awoken by one of these bricks and, for a moment, cannot remember where she is—is she back in her home in Berkeley or is she back in the horse stables that the Japanese Americans were kept in earlier in their journey?

The stables at the Tanforan Racetrack, still smelling of horses and infested with fleas and gnats, were used as a temporary detention camp housing Japanese Americans before the permanent camps were built. It was the second largest of such assembly centers. The passing mentions of Tanoforan throughout the novel by both children give readers the first glimpse of horrifying the conditions people were forced into before they even arrived at the camps themselves. With each stop along the journey to the permanent camps, their humanity was being stripped away under the guise of national security.

In reading the descriptions of Tanforan and the barbed-wire fenced camps with barrack buildings packed tightly together in the middle of the Nevada desert through the eyes of two young children, it is impossible to ignore the repetition of history. The Trump administration even plans to use Fort Sill, in southwestern Oklahoma, which once housed seven hundred Japanese Americans, as a detention center for children who cross the US-Mexico border. One may be tempted to argue that the situation is different—the Japanese Americans were citizens, while migrants currently housed in camps along the border are not. But therein lies what is truly horrific about the history of internment: the United States government treated its own citizens as enemy aliens, stripping them of both their rights as legal citizens and as human beings. If such a government would do treat its own citizens in this way, what will it do to those who are without such “protections”?

When the Emperor was Divine not only addresses the experience of internment—it also tackles the emotional implications of the internment experience. The final two chapters of the novel reveal the toll the trauma of internment has had on families long after they moved beyond the confines of the barbed-wire fence. The family in the novel is lucky in that they have a home to return to, though it has been looted and become run down in the intervening three years by those who took advantage of the family’s internment. Though their house is in a poor state when they return, they at least have a place to live.

More than the loss of material possessions, however, what haunts the children is the way they continue to be perceived by the members of their community. After years of demonizing an entire group of people based on their external characteristics, eventually forcing innocents into camps for “Enemy Aliens,” it is impossible for that rhetoric to disappear overnight. And though the novel leaves readers with a sense that things will improve, that this family will once again be welcomed into their community, there is also a sense that things will never be the same. The chapter that closes the novel is the “confession” of the father, who was taken away by the FBI before the rest of the family was sent to the camp, and includes all of the stereotypes and ludicrous claims put forth by the government against Japanese Americans, all of which boil down to an anxiety about racial difference. With no other choice, the father simply parrots back what his tormentors want to hear in order to make the interrogation against him stop. Placed in this context, the racist claims that once prompted widespread internment are revealed as empty, but dangerous, rhetoric.

Looking back on the recent history of the United States, it becomes clearer that we must confront statements like “Go back where you came from” because they carry a history of violence. Rather than being empty threats, history shows that these sentiments lead to violent action. But it is not enough to address those who utter these words; it is just as important to consider how certain groups perpetuate racist violence, even within communities of color. It has recently come to light that one of the private contractors that inspects the detention centers housing migrants, Nakamoto Group, has severely cut corners during their inspections, meaning that there is little real oversight over the safety and sanitation of these detention centers. The owner of the firm is Jennifer Nakamoto, whose mother was herself born in an internment camp. Though Nakamoto claims that her family’s own internment experience informs the company’s practice, it takes little digging to see that these centers are far from humane and instead perpetuate the same dehumanization that occurred to Japanese Americans during WWII. Thankfully, members of the Japanese American community have been quick to call out the actions of those employed by the Nakamoto Group and have opposed the horrific treatment of children in these centers.

Though it is easy for many to argue that the Japanese internment experience has been over-cited in discussions of racism in the United States, the lessons Otsuka lays out in When the Emperor Was Divine clearly bear repeating.

Tags:Julie Otsuka, When the Emperor was Divine