Home
»
Uncategorized
»
The Voice Inside the Book 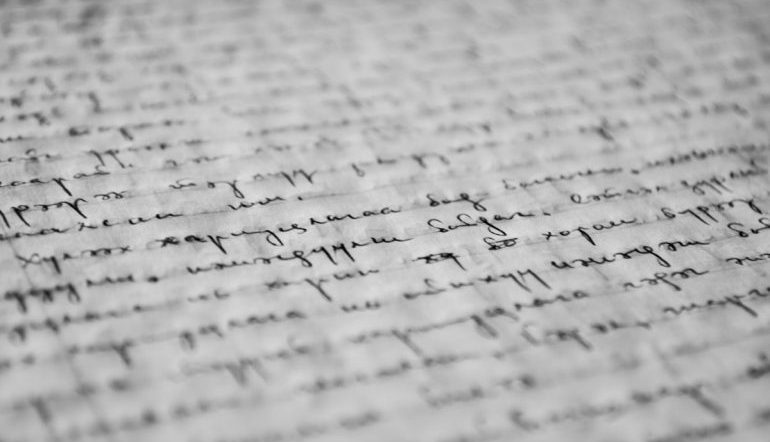 My friend Pip sent an intriguing note recently. He’d just finished reading A Short History of Nearly Everything and had a taste for something classic, so pulled Homer from his shelves. The book was part of a library his dad had accumulated, Pip wrote. “I opened The Iliad and out fell a note from my father, written thirty-one years ago, after I had read the books for college and replaced them on his shelves. As his handwriting had nearly failed by then, the note took several hours to decipher.”
This friend has been my techno-emergency hotline for decades. He’s invariably calm, good-humored, and wondrously literate. A single frantic call will often include references to Cal Ripken, glacial sculpting of the Rawah Wilderness, the fine art of home-brewed beer, Pepys’ diary, how his father skipped graduation from Hopkins because John Foster Dulles was the keynote speaker, and the challenges of food transport in southern India. Simultaneously, he’ll resurrect my computer. The man is a god to me.
His father had juvenile diabetes. “I never knew him healthy,” Pips says. His grandparents had lost their daughter when she was nine. Later they had Pip’s father, who got rheumatic fever and nearly died at the same age his sister had. His parents became even more fiercely protective of their youngest son. Books became his companions. Pip’s ancestors were mainly laborers–including gunsmiths whose work is now in private collections–until his father. He was not only the first high-school graduate in the family, but the first to go on to college and graduate degrees.

As a boy, Pip loved his father’s collection of Sherlock Holmes stories. Each week, his mother would bring home a new PG Wodehouse from her job at the Baltimore County Public Library. Though his father got a masters in mathematics from Johns Hopkins, they’d more often discuss Shakespeare or Plato at the dinner table. Once Pip’s father found a four-inch caterpillar and brought it home, let it hatch in the house. It was a giant Cecropia moth, whose wing span can reach six inches. It laid eggs everywhere, Pip laughs. Aspects of his childhood were clearly idyllic.

“But as I became familiar with insulin reactions,” he says, “I began to realize there was another party at the table.” Those reactions ranged from disorientation to a full coma. From seventh grade on, Pip knew how to give injections. Then his father stepped on a shell at Scientists’ Cliffs, where they hunted for Miocene-era fossils each summer. All wounds are complicated by diabetes, but foot wounds are dire. Their family life changed dramatically.
Pip’s father now spent several months a year in the hospital. Wheelchairs, insulin, and ambulances became the norm. The diabetes grew harder to control. One day, Pip came home to find both parents gone. His father had been hospitalized and his mother was spent from cumulative stress. After two nights of cheese sandwiches, he perused the shelves and found The Joy of Cooking. Flipped through it, thinking, “This doesn’t look that hard. So on the third night, I made spaghetti.”
My first thought when I read Pip’s note was that there are few things more intimate than our parents’ handwriting. It would be heart-trembling to get a message from your father twenty-eight years after his death. Then I wondered how many of us tuck notes in our books. My library is an errant filing system: postcards from lost friends, napkin poems from strangers, photos I could no longer caption, a Polaroid of me with Annie Sprinkle’s bare yeasty breasts on my head. In my copy of The Iliad, I find an antique postcard of Rossetti’s Beata Beatrix, his dual tribute to beloved ones who die too young. Very faintly in the background, Love holds the flaming heart she fed to Beatrice in Dante’s first dream of her after death. There’s an emotional logic to all the notes tucked into my library. But nothing matches a father’s voice.
It was probably during a college survey course that Pip borrowed Homer from his father’s library, then returned it. Immediately after college, Pip moved home again to help his parents. In early September 1982, Pip was in Montana with a friend. They’d gone to bed at dusk so they could rise at two a.m. to hit a Teton trailhead. That’s when he got the call. “We didn’t expect him to live,” he says, “but we didn’t expect him to die.” It was Labor Day weekend and flights from Montana to Baltimore were neither plentiful nor affordable. “My friend Will gave me a thousand-mile lift to the airport.” Then Pip corrects himself. “Actually, the ride from Missoula to Denver is probably about 890 miles. Each year on September 4th, I write Will to thank him for that ride.”
His father guessed rightly that Pip would return to Homer again at some point in his life. The questions he poses are both scholarly and fatherly: Was Helen taken as chattel, did she willingly leave her husband or “was she a fifteen-year-old tinny bopper?” Was Achilles spurred by bitterness? Odysseus, he notes deliciously, “is more earthy and human.” And who was Helen, in the end? Timeless queries of hubris and character; a paternal quiz on maturity and consequences.
His father labored to write these lines, to dialogue with his son through immortal books, as though they were still at the dinner table. “But it’s the first line that will always stay with me,” Pip wrote. “‘John: don’t lose my books!’ Both he and Homer are long gone, but their simple language still snares very complex matters.”
Each year, Pip journeys deeply into the wilderness with old friends. This past year was the first time offspring came with them. What he loves most is “being outside. Seeing stars as they’re supposed to be seen. I love the comradery of the post-hike campsite. And, you know, the light at higher altitudes–you can’t take a picture of it. So if you want to see it, you just have to go there.”
Like returning to Homer. His father’s corneas gave sight to two people. His daughter is now reading the Conan Doyle books that were Pip’s first literary crush. This is another reason why I believe books will never die. They connect us to one another, across the centuries. They’re as essential to our humanity as the light at higher altitudes.
This is Carol’s sixth post for Get Behind the Plough.
Moth photo from: http://www.silkmoths.bizland.com/zcecmoth.htm