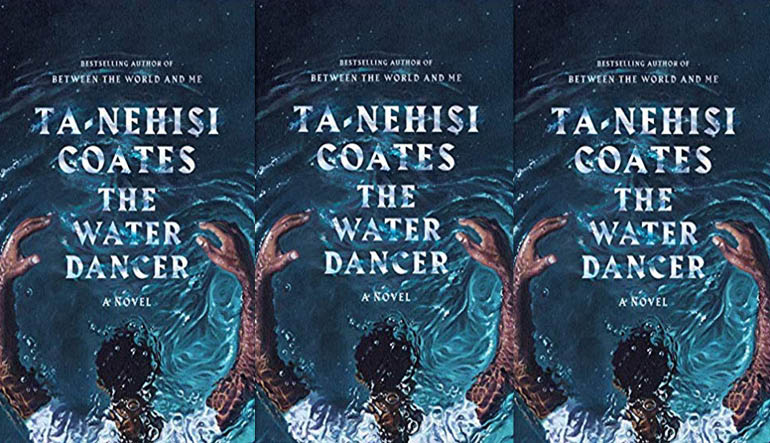 Who does the telling in a first-person narrative matters, as it puts into relief a constant tension between memory and judgment of events. Beyond credibility, the heart of someone’s perspective should shine through when recounting their life. In his debut novel, The Water Dancer, National Book Award-winner Ta-Nehisi Coates makes this clear, opening with a quote from Fredrick Douglas: “My part has been to tell the story of the slave. The story of the master never wanted for narrators.”

Our narrator is Hiram (“Hi”) Walker, born to a white tobacco plantation owner in Virginia and a black mother. The soil hardening and the economy suffering, families like Hiram’s are separated—women and children sold off through a Natchez marketplace as plantation owners try to recoup their losses. While the fight for freedom underlines much of the novel, it’s the search for family that brings characters together. The possibility of family reunion drives Hiram and many others to break free from their chains, to join or beckon the Underground. It’s at the core of the myths and stories they share to keep hope alive in their communities.

In the story, Hiram develops a magical power called “Conduction”—the ability to leap places and memory through a blue mist—which brings him closer to finding his mother but also attracts attention. He must contend with whether to use this magic to help others or to find his mother and later his love, Sophia. As his powers increase, so does interest from others wanting to exploit them. One old man warns him in a dark prison cell, “Slavery does not bargain, does not compromise. It devours.” Everything that slavery begets, including freedom from it, comes with chains attached you don’t see or feel until it’s too late.

While this power gives Hiram a glimpse into a “home-place of [his] own” as the elders describe, it can’t set him free from the plantation, nor does it reunite him with his family. For that, he seeks out The Underground, a mythical place below ground where the Tasked (the enslaved) live free. He soon learns it is a secret network of agents—whites and blacks—who execute well-choreographed plans to liberate the Tasked. But freedom comes with a price, as the old man foretold. For example, after saving a woman and her young boy but not her husband and other children, she tells Hiram and his partners, “if you can’t put us back together, then your freedom is thin and your church and your city hold nothing for me.” They don’t know if the remaining family members still live, nor can they risk another rescue mission. Freedom from bondage cannot save families from the pain and damage slavery has already caused them.

For Hiram, death and separation become portals of hope through stories, myths, and magic. Some materialize as true, like his power of Conduction. Others are upended as bound to earthly realities, like the Underground’s war against slavery. Similar to Esi Edugyan’s Washington Black, where death in the stories elders tell acts as a door to a place where families sing and dance with the gods, Coates explores the brutal history of slavery through a magical lens to share a black narrative and to try to make sense of the violence, just as his characters do. Storytelling, then, becomes a kind of liberating act that surfaces the wounds Hiram can’t forget and now, as he tells his story, refuses to hide.

Coates shows a Virginian society in decline, not just as a place of violence, displaying its fractured strata on Elm County’s race-day. The Quality (landowners and their descendants) and low whites (the poor who do odd jobs and hunt escaped slaves) participate in a carnival of gambling, courting, and fighting. The Tasked, on the other hand, keep their quiet distance, weary of drunken whites. Hiram’s white brother, Maynard “the goof”, mingles with the low whites and breaks a dangerous social norm. The Quality looks down on him from their balcony during the horse race, as Maynard yells and waves back at them. He represents the breaking down of social structures, imploding along with plantation economy. Race-day emerges as a white masquerade, behind its façade a carnival churning the world upside down: “the masks of fashion and breeding would fall away, until the oozing, pocked face of Elm County would be revealed.” We see the white community from the black perspective, Coates turning a critical eye on those who are used to claiming the narrative.

The Water Dancer builds stories within stories, revisiting pre-Civil War America through the eyes of a survivor of the slave trade. Hiram goes on adventures undercover, saves lives while bringing unfortunate endings to others, and believes in myths while creating his own in the power of Conduction. Hope in the shape of freedom seems always around the corner, but maybe that’s the point. It’s worth fighting for, because freedom in itself is the right to bring and keep families together.