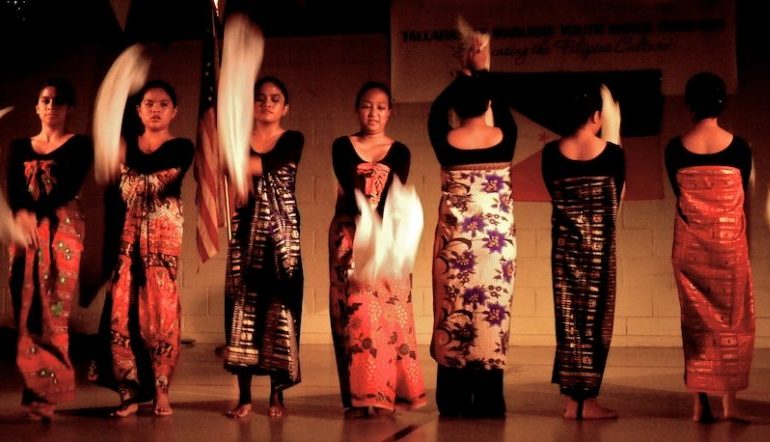 Women’s writing is so often ghettoized and hidden from view. Women write from the private, individual “I,” while men write of the public and the universal “we.” In her newest collection, Invocation to Daughters, Filipino American poet Barbara Jane Reyes boldly and loudly refuses that division, writing from an expansive, complex “we” that pulls all the quiet daughters out from where they were hidden away. She writes in a new language for the daughters, the mothers, the workers, the immigrants, the monstrous, the bitches, the detained, the dead, the silenced: the women.

Language is fraught for Reyes, and her poetry crackles with her attempts at breaking out from the binds of colonialism, gender, and history. Playing off the questions often asked of women writers of color, Reyes begins Invocation to Daughters with a poem titled “FAQ.” In response to the first question, “Are you fluent in your mother tongue? What is your mother tongue?” Reyes responds in English and Tagalog, a language that bears the colonial history of Spain in the Philippines. “My mother tongue is… mongrel and bastard,” she writes. “The tongue is not déficit but prisma, and light (in)forms its root and offshoot. It is sometimes called refraction.” Reyes’s language, bastardized by colonial violence, is also one that’s thriving and full of light.

“The Gospel of Erasure,” an erasure poem of a racist GQ article from the 90s titled “Oriental Girls: The Ultimate Accessory,” is a chilling indictment of the intersections between anti-Asian racism and misogyny. Reyes removes everything but the pronoun “you,” stripping the article of everything but its bare possessive intent:

It is a frank, incisive addressal of the violence that Asian women are subject to. Many of the poems in the collection are written in mourning and in remembrance of Filipino women who have been abused and murdered. Reyes writes to Jennifer Laude, a trans women killed by a U.S. Marine in 2014, to Mary Jane Veloso, who sits on death row in Indonesia for smuggling in heroin after fleeing her abusive employer, and to Norife Herrera Jones, who was killed by her estranged husband in California in 2012. “Praise you. May you emerge, graced and gospeled. Unjudged, / unfallen, and the color of sky,” writes Reyes in “Psalm for Mary Jane Veloso,” as a late sacrament to these fallen women.

One of the book’s final poems, “The Day,” is a prose poem framed by the day that Reyes’s own father passed away unexpectedly. She begins with the last meal they ate together: “Four days later, his brain got lost in language. No words. His body forgot how to walk and how to swallow.” And ends with her listening for words that have yet to come: “I could not sleep for a long time. That I would not close my eyes. That every night noise might have been him visiting me.”