Home
»
Uncategorized
»
The Why of Things 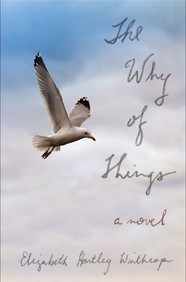 I can’t decide whether to be furious with Elizabeth Hartley Winthrop’s new novel, The Why of Things, or to admire it. In some ways, it’s one of the most frustrating, unsatisfying books I’ve read this year—one giant red herring from start to finish, weaving you back and forth from possibility to guess to suspicion to almost-climax, and rarely giving you the resolutions you’re sure are coming. The book’s central mystery—a family arrives at their Cape Ann summerhouse to find a pick-up truck, dead driver and all, freshly driven into the quarry out back—seems perpetually in a state of being solved, the answers always just slightly out of grasp.

And yet: the story is also totally engrossing from start to finish. Winthrop’s scene building is captivating, her characterization intricately layered, and her ability to build tension both preternatural and Hitchcockian—the suspense accumulating so subtly that you don’t notice you’re getting wound up ‘til you put the book down to take a break and suddenly your teeth are clenched.

Here, some more information about the plot is probably necessary: the Jacobs family—novelist Joan, husband Anders, and daughters Sophie, Eve, and Eloise—have been coming to their summerhouse every year for decades. But then, in the October before the book begins, seventeen-year-old Sophie commits suicide by driving her car onto some train-tracks. So as we join the Jacobses, at the start of a new summer, each of them feels unmoored, uneasy, and the book follows them in a round-robin of close-third narration as they muddle through the days remembering their lost relative—or, more often, trying not to.

An obvious criticism of this setup is that it leaves a lot of opportunities for the sort of go-nowhere navel-gazing in which literary fiction is often accused of luxuriating. And sure enough, these characters know how to navel-gaze—so if you’re bored by that sort of thing, well, you’ll probably be bored here. I usually am, though, and that was not my experience of the book; the world of Winthrop’s story is just too rich to find dull. Good grief, she makes a whole scene out of Anders going through his dead daughter’s wastebasket, never emptied after the previous summer:

There is a Twizzler’s wrapper at the bottom, a balled-up Kleenex, a movie ticket stub, which when he takes it from the basket he sees is from August 12, for a matinee of Citizen Kane playing at the arts cinema in Rockport. He remembers Saul coming to pick her up that afternoon. There is a crumpled scrap of paper with doodled stars around a street address in Beverly—588 Cabot—a chewed toothpick, a broken barette.

I can’t help but respect a writer who knows her characters so well that she can not only imagine what a depressed sixteen-year-old might throw away in her summerhouse trashcan, but can also perfectly imagine how her father will react to those things a year later; it feels less like fiction than documentary. And even months after I read my ARC, I still remember that scene vividly. Surely that’s a sign that Winthrop is doing something right?

None of this, of course, undoes the fact that the book is a whole lot of red herring. But I expect that’s intentional, actually, as a kind of meta-commentary on the impossibility of resolution when you lose a child to suicide—and on a writerly level I admire Winthrop’s ability to accomplish such sophisticated textual trickery, even if on a readerly level it leaves me a little sore.

So I suppose my answer, in the end, is that I do admire The Why of Things. But consider this fair warning: you may just end up furious.