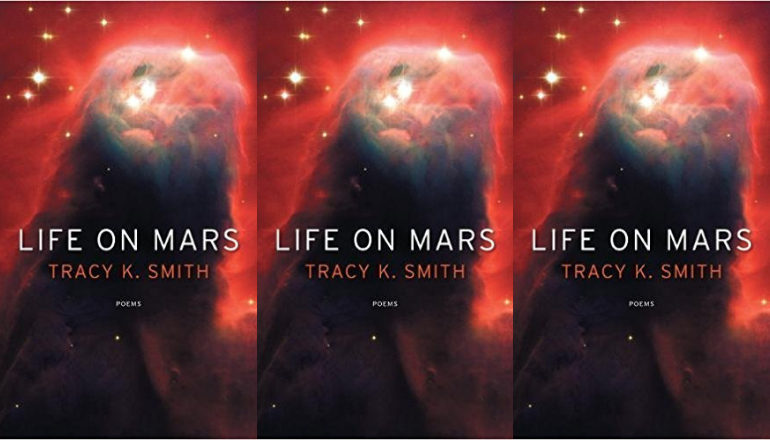 I met Tracy K. Smith a couple of weeks before she won the Pulitzer Prize for her terrific and completely ravishing new book, Life on Mars.  We were at a book party for Stephen Motika and his lovely new book, Western Practice – a loft somewhere downtown, in the rain, owned by people I didn’t know.  Tracy came over to tell me what a great speaking voice I had (aside from being raspy and constantly compared to Harvey Fierstein and Wolfman Jack, it is also pretty loud) which is not always the best opening line – except that in Tracy’s case, the speaking voice at large was a subject quickly abandoned for the more important subjects of writing, teaching and other poets we both know and love.

Life on Mars is a book about a world real and a world imagined and, at times, a kind of world ecstatically hoped for.  And so, my questions for Tracy really had to do with how she managed to take on those worlds in such a simple and intimate way and how, in the end, such a balancing act is a vocation the poet is – when the wind is right – uniquely qualified for.

Michael Klein:  Firstly, Mazel Tov! on your fantastic Pulitzer news.  I e-mailed you the other day about this panel that Jan Clausen is proposing for the AWP Conference next year, which I think is terrific and immediately made me think of you and your wonderful Life on Mars – the book, that is.  Jan’s panel is called “Late Word: Imagination on the Brink” which is about how the collective consciousness has been trying to define itself since the 1950’s – the nuclear imagination, let’s call it – as something that either lets the world go, or holds the world, i.e., prevents it from blowing up.  You wrote me back to say that you were thinking a lot about these kinds of things and wondering how your poems might begin to address them.  And I think Life on Mars is actually the start of that thinking.  Can you tell me more about you approach the subject of – let’s call it, life here – on the brink, on earth?

Tracy K. Smith:  Well, I think that believing in language – in the ability of words to bring even an imagined reality into being – is a big part of what it means to write poetry.  If something like an idea or a belief is capable of being imagined or even described, then the possibility that it will be acted upon becomes much more likely.  I think that many of my poems are attempts to take myself up on that premise, to step into conversation with voices and events that require me to decide something:  what do I believe is right?   What is the more subtle or subjective view of this situation?  What must I challenge myself to understand?  And what, if spoken, will require me to hold myself to a better standard of being or believing?  In terms of wanting to hold the world or letting it go, I personally am earnest enough to want to hold it. And I think most people who aren’t radical fundamentalists of one variety or another feel the same way.  I’d even wager that the radicals believe they are trying to save the world for something.

MK:  Of course, what I love about Life On Mars is how otherworldly it is and yet how direct it is, too, about life on earth.  You make the universe as intimate as love for a father.  Everyday life, common knowledge, aside for a moment, where do you think your attraction come from to those things we can’t see, something like God, and the imaginary life?

TKS:  I wrote the bulk of the book in the wake of my father’s death, and while I was pregnant with my daughter.  So those unknowns felt very present and very urgent for me.  I needed to figure out where I believed my father had gone and what he had become a part of, and so approaching the page really became a matter of attempting to describe or create a version of that world that would allow me to move through my private grief to something else.  But even beyond my own private experience, I think it’s quite natural to use versions of what we know or have experienced as the framework for imagining what we cannot know, and what we have not yet experienced.  That’s why metaphor exists.

MK:  The book also is full of sweeping gestures but it’s also smaller, meditative.  And it feels metaphysical as well.  You can write a poem like “Life on Mars” and then something pared down like “The Good Life”.  Is there such a thing as something too big to write about?  Too small?

TKS:  Well, I obviously don’t think so!  I hope that in both cases, concrete particulars save the poem from feeling too abstract and too inconsequential.  My belief is that they create the sense of a real space or a real encounter to be entered into and felt.  And I think that the desire for feeling is a large part of what attracts many of us to poems.

MK:  The tone of the book is so sweet – and I don’t mean that in a syrupy or condescending way at all – but I was struck by how instead of dread about the contemporary human condition, you seem to have a shining hopefulness about it all.  It made me think that writing – even if the going is dark – is actually a joyful act for you.  Is it?

TKS:  I don’t know how hopeful I feel in real life.  And I think that some of the poems linger in a dark or unresolved place.  “Ransom” is an example of a brief poem that doesn’t try to fix anything, and that registers dissatisfaction with the kind of pat solution that has been posited for a complex problem like that of piracy.  And “Life on Mars” doesn’t really emerge into the light, though perhaps it implies that there is agency at the root of conflict, and therefore the possibility for something better to characterize the ways we as humans relate to one another.  But I will agree that there is also a sense of compassion that the book is trying to envision.  It was very important for me to step outside of my own sense of right and wrong in the poem “They May Love All that He Has Chosen and Hate All that He Has Rejected” and test out a perspective that felt more distant and comprehending, characterized by the kind of understanding I imagine the dead come into.  It was a very uncomfortable thing to do, but I felt that the poem required it, and I think it taught me something about how I as a citizen might attempt to look at the world.  Joy is a part of my process.  In fact, I’d go so far as to say that poetry, as a practice, necessitates a sense of joy.  It’s exhilarating to come into contact with the things we write into being.  And a real sense of play and abandon – even when we are relying on hard-won technique, and even when the aim is deadly serious.  How often do we get the excuse to stop, think, and then stop thinking altogether and try to listen to what sits behind our outside of our thoughts?  Poets are lucky.