Home
»
Series
»
The Words Beneath the Sound: Music Inspired by Literature 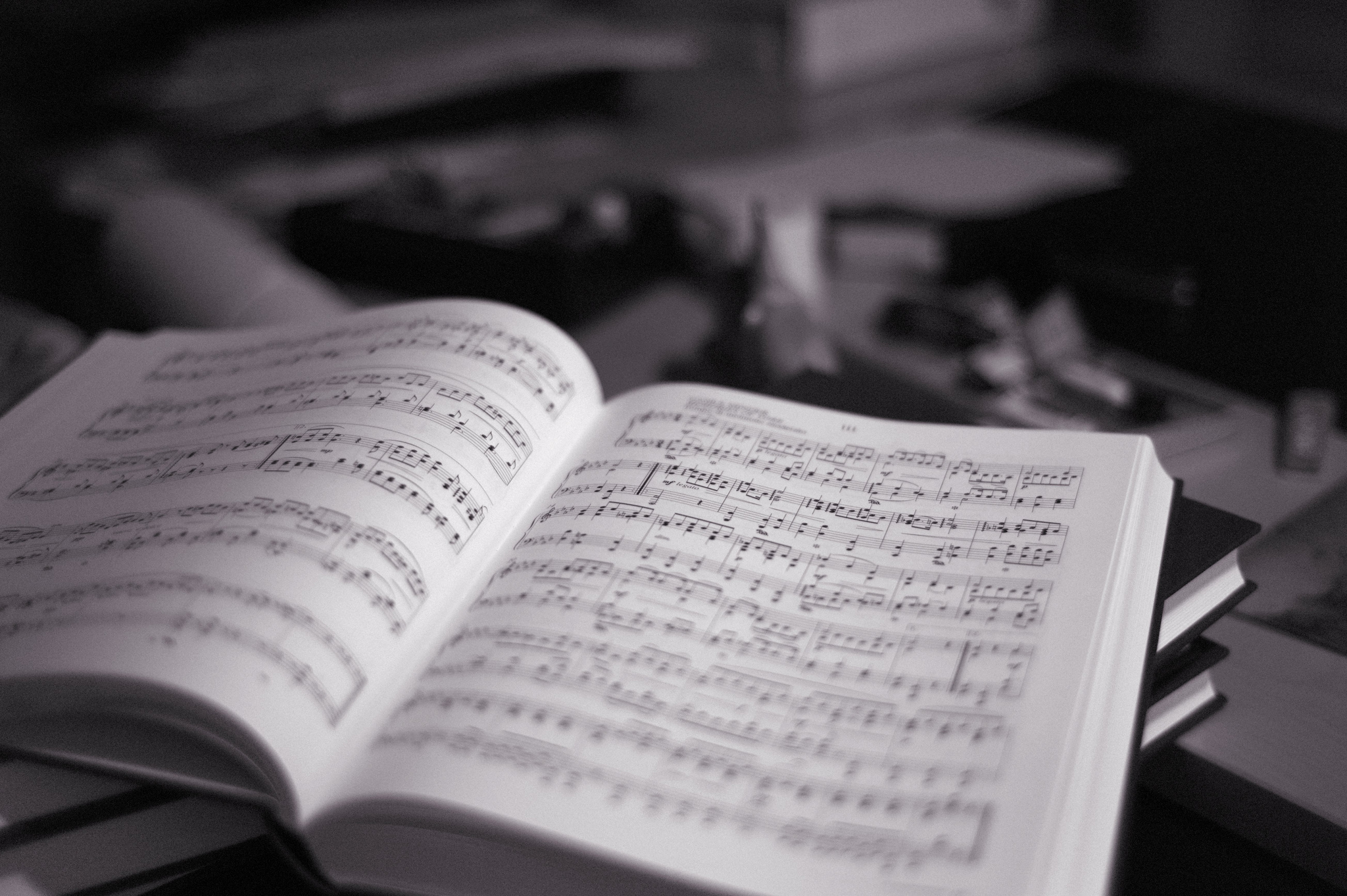 As Virginia Woolf famously observed, the best writing often begins with a rhythmical “wave in the mind,” an inner tempo around which syntax and diction are arranged, a guiding beat of artistic intuition that, when struck upon, makes it nearly impossible to set down the wrong word. Other writers have similarly expressed the importance of heeding the aural resonance of language, of prioritizing sound over sense and music over meaning, and ceding control to the mysterious cadence that can string together words so that they beg to be spoken aloud. Poetry, of course, is chief among literary forms for its emphasis on rhythm, a relationship overtly celebrated in illustrious works such as John Berryman’s Dream Songs, or Whitman’s polytonic verse. John Taggart, a poet greatly influenced by the composer John Cage, even argued that the very goal of poetry is to create “sound objects” where poems cease to pursue metaphor and become more like mini-operas, arrangements that achieve the effect of compositional scores.

Unsurprisingly, the interrelation between music and literature also flows in the opposite direction, with composers taking inspiration from authors. Consider The Rolling Stones’ “Sympathy for the Devil” (The Master and the Margarita), Guns N’ Roses’ “Holden Caulfield” (The Catcher in the Rye), or Bruce Springsteen’s “The Ghost of Tom Joad (The Grapes of Wrath). Instances are equally prevalent among classical works—to cite examples from just one career, the Welsh composer Donald Ibrahím Swann (1956-1967) wrote a full-length opera of C.S. Lewis’s Perelandra, set music to J.R.R. Tolkien’s poems from The Lord of the Rings, and wrote scores to accompany the words of William Blake, Emily Dickinson, and Oscar Wilde. Indeed, the list of music inspired by literature is predictably vast and continually expanding, often in innovative ways. Here are four recent compositions that, though notably diverse, are united in holding words as their muse:

1. The Trial, by Philip Glass

An icon of postmodern symphony and arguably the most popular living composer, Philip Glass grew up steeped in literature, the son of a professional librarian. It is somewhat expected, therefore, that Glass draws significant influence from writers—to date, he has composed 25 operas with a literary basis, including works inspired by Edgar Allen Poe, Doris Lessing, and Allen Ginsberg. His most recent, The Trial, is an adaptation of the 1925 novel by Franz Kafka. Released as part of the 2014/2015 season at the Music Theater Wales, the opera features eight singers who play multiple roles, an orchestra of only 12 instruments, and a libretto by playwright Christopher Hampton that closely adheres to Kafka’s text while still leaving room for interpretation. “[Kafka] saw the political and social world we are involved in with a clarity that very few writers have ever seen,” says Glass in a video produced by the London Royal Opera House. “He could see what was happening, and he could describe it. Sometimes the music can follow the picture exactly; the music is right on top of the image. But if we start moving away from it—and that’s what we do in the theater—it allows the spectator to help invent the story.” With this emphasis on collaboration, Glass adds a new layer of life to The Trial, lending the sense that Kafka’s compelling yet unfinished novel is, in a way, still in the process of being written.

As both a singer-songwriter and novelist, Ben Arthur is ideally situated to explore the vanishing line between story and song. Earlier this year, he released his seventh album, Call & Response, a collection of music intended to answer the work of other artists. Along with songs motivated by musicians, the album includes tracks that respond to short stories by Joyce Carol Oates (“Forked River Roadside Shrine”), Alice Munro (“The Bear Came over the Mountain”), and George Saunders (“The Semplica-Girl Diaries”). In engaging with Saunders’ work, Arthur sought to capture the yearning that he felt surrounded the story’s human lawn ornaments, an emotion portrayed in the song’s second verse:

A strong advocate of idea-sharing and cross-collaboration, Arthur’s work encapsulates the notion that art is not truly realized until it is inhabited by an audience, thereby inviting essential connection between two minds.

“A book is a heart that only beats in the chest of another,” wrote Rebecca Solnit. “The object we call a book is not the real book, but its seed or potential, like a music score…its real home is inside the head of the reader, where the seed germinates and the symphony resounds.” There is perhaps no better description for Arthur’s music, each song a conversation with the story from which it sprung.

As part of last month’s Texas Book Festival, NANO Fiction teamed up with the organization Pale Blue to host Sehr Flash, a public event so-called for the term “sehr Rasch,” the German tempo marking for music played at a brisk pace. The event paired contributing authors Callie Collins, Kelly Luce, Michael McGriff, Vincent Scarpa, Jessica Richardson, and Matthew Salesses with composers Hermes Camacho and Russell Podgorsek, who created original scores in response to the writers’ short fiction—Podgorsek’s “Inside,” for example, answers Luce’s “Outside,” itself a story about music and the connections it inspires. They then enlisted the Cordova Quartet, a string ensemble at the University of Texas, to perform the compositions alongside live readings of the corresponding text. Volume 9, Number 1 of NANO features each of the Sehr Flash stories as well as printed sheet music of the accompanying scores. The stories and their musical counterparts are also available in an online playlist, through which the powerful outcome of this creative relationship can be both heard and felt, each musical track flowing into the silence that normally follows thought-provoking prose, demonstrating the alchemy between two aesthetics to striking effect.

Mohammed Fairouz first set Oscar Wilde’s poem “The True Knowledge” to music at the age of seven. Now in his late twenties, he has already composed four symphonies and an opera in addition to Follow, Poet, a full-length album released earlier this year with the eminent Deutsche Grammophon label. Fairouz’s work is known for invoking art alongside politics—his third symphony, Poems and Prayers, weaves Arabic poetry alongside a musical narrative of dispossession and reconciliation; his fourth symphony, In the Shadow of No Towers, references Art Spiegelman’s comic book and is based on discussions with the author about the September 11 attacks. Follow, Poet similarly exalts the transformative power of language in relation to events of political relevance: the album includes “Audenesque,” an elegiac song cycle set to verse by W.H. Auden and Seamus Heaney, as well as a five-part ballet called “Sadat,” an instrumental that tells the life story of the late Egyptian President. “The text always comes first,” writes Fairouz of his process.

“The music follows. When I set text to music, I try to live in the atmosphere of the text and the narrative of the poetry. Ideally the words do not get in the way of the music and, when I work on a text setting, I do everything I can to not allow my music to get in the way of the text. In the end, text and music can join together into one of the most incredible storytelling experiences we can generate as human beings.”