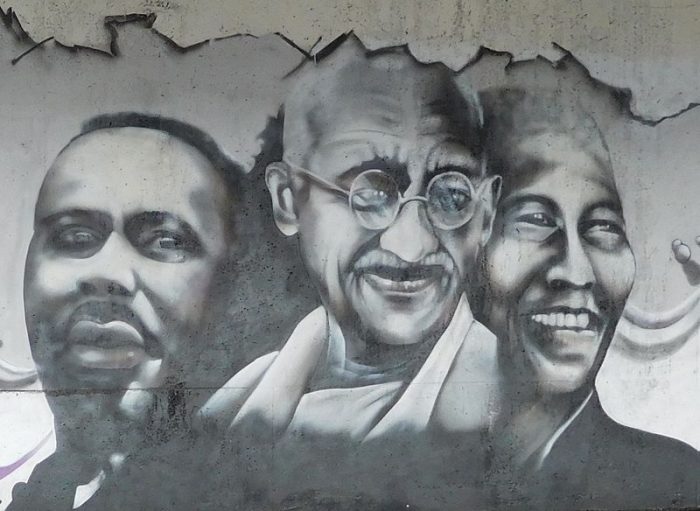 Black people have been fed so much toothless rhetoric regarding how we are supposed to deal with the brutal realities of racism that it now starts to ring both disingenuous and hollow. The “Unite the Right” march that took place in Charlottesville this last month was not an anomaly as much as it was a confirmation of something we already knew: America is engulfed in racial hostility and persecution. And more often than not, white people will do anything to preserve their privilege (the election of Donald Trump is the biggest evidence of this). But as injustices continue to occur, using the words of Black activists to tell Black people how to feel in the face of racism/tragedy is not only insensitive, but completely unnecessary. Imploring Black people to remain calm in the face of bigotry that literally kills us is a horrendously cruel tactic used to comfort our oppressor while simultaneously erasing the pain of the oppressed .

No matter how well intentioned, anecdotes of “love conquers all” ignore a world where quite the opposite happens on an alarmingly regular basis. Adding insult to injury are the countless string of quotes made by activists and leaders of color that become misconstrued and magically flood social media pages and timelines whenever an injustice happens by the likes of: Martin Luther King Jr. (“Darkness cannot drive out darkness; only light can do that; hate cannot drive out hate; only love can do that,” “We must meet hate with love”), Gandhi (“Peace is its own reward”), and even Nelson Mandela (“People must learn to hate, and if they can learn to hate, they can be taught to love, for love comes more naturally to the human heart than its opposite”).

The constant use of these phrases is problematic for a few reasons. Reciting the same recycled quotes signifies a blanket approach to Black activism that leaves out many of its leaders (Stokely Carmichael, Malcolm X, Fred Hampton, Marcus Garvey, Bobby Seale, Huey Newton) whose methods were deeply rooted in Black nationalism and weren’t nearly as touted as acceptable. They had become synonymous with unabashedly calling out economic, social, and political systems that caused Black suffering, and they formed their own entities (Black Panther Party, Nation of Islam, Pan-Africanism) to empower, support and sustain Black people. This recycling of quotations also simplifies the achievements of Black leaders.

King, Gandhi, and Mandela weren’t just making powerful speeches that advocated nonviolence for Black people to gain civil liberties and rights–they were on the front lines leading protests and marches as they stood with their people. They sacrificed, suffered, and were killed for trying to dismantle dangerous structures that keep Black folks disadvantaged on various levels. To boil down their work to just a few select quotes omits the complexity of their accomplishments and reiterates to the disenfranchised that it is more important to prioritize respectability over humanity. There is nothing wrong with conjuring the words of vital Black leaders in contemporary times of adversity–as long as you’re using all of them.