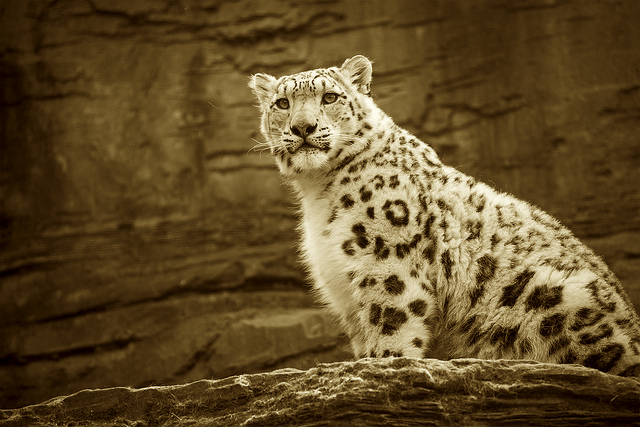 Lately, it seems mindfulness is next to godliness. For many, concentrating time on a rich inner life is an antidote for overstimulation—the meditation smart phone app serving as a one-swipe pharmacy for this modern malady.

Books foster interiority too, and Peter Matthiessen’s The Snow Leopard (1979) pulls double duty. At first browse, it’s an adventure story focused outward on the elusive spotted feline who roams the wintry Nepali mountain range known as Annapurna. Matthiessen infuses his account with Zen wisdom as well as Buddhist history and symbols that are rarely packaged in so sensitive an observation of the natural world. The effect is an inspiring study on mindfulness and meditation.

The writer zooms in and out of his own psyche to detail the beguiling climate surrounding Annapurna. His field notes include rich descriptions of lush plant life and harrowing weather, of simple meals and hazardous landscapes. Facets of memoir poke out of the pages. Most significant is the cancerous death of his wife “D” a year before the leopard hunt gets underway.

Matthiessen shares his discovery that overcoming the heartbreak of losing a loved one to premature disease is possible only through a sort of graceful transcendence, a dissolving of the “separate ‘I.'” A lengthy bout of chanting leads him to a concentrated state known as Samadhi. He’s able to overcome the ego enough to cease asking “whys” of God and the universe and instead accept moment-to-moment living.

Throughout the book, the past winds into the present, as does the non-linear approach to time that is so popular in the eastern world. Wrapped up in this “Great Time” is the notion that “all is present in this moment.”

A similar takeaway from this story is a quiet acceptance of the happenings around you, signified by the ever-popular Zen chant of a seemingly never-ending “om.” Matthiessen writes that the sound is: “. . . a declaration of being, of Is-ness, symbolized by the Buddha’s gesture of touching the earth at the moment of Enlightenment. It is! It exists! All that is or will ever be is right here in this moment! Now!”

Suddenly, “om,” that most popular yogic mantra, is infused with meaning.

This acceptance of life as it comes, “not fatalism but a deep trust in life,” seems built into the Sherpas leading Matthiessen and the other leopard seekers. He recounts a group of them collectively weeping alongside a cook who has just heard of his wife’s leaving him for someone else. They are “so open,” he writes, “so without defence, therefore so free, true Bodhisattvas, accepting like variable airs the large and small events of every day.” A Bodhisattva is someone who delays entering Nirvana in order to empathize with others in need.

The Sherpas’ behavior proves humbling and genuine, framing this months-long hunt for the mysterious snow leopard.

The latter third of the book hones in on following the tracks of this giant cat and blue sheep, its choice prey, up the Crystal Mountain. It’s tempting to attach metaphor to the predatory animal: it’s usually glimpsed alone and able to be seen only when the lookers are ready to see it. Seeing it “by camera flash, at night” is not actually seeing it. The goal is not documentation, to take photos of the snow leopard. Technological tools invade and interrupt authentic experiences, especially those involving nature and wildlife.

Pleasure rests in embracing the present moment, as Matthiessen does toward the end of the book, answering, then commenting on his own semi-rhetorical question:

Have you seen the snow leopard?

No! Isn’t that wonderful?

When Matthiessen’s expedition party finally comes back down the mountain, mild regret sets in: “Perhaps I left too soon: perhaps a great chance has been wasted; had I stayed at Shey until December, the snow leopard might have shown itself. . . . In worrying about the future, I despoil the present; in my escape, I leave a true freedom behind.”

The end of the novel echoes this same spirit. The author bicycles to an “ancient shrine” to meet with Tukten, the head Sherpa, whose quiet embracing of life’s twists and turns leaves an impression on Matthiessen. The twist here is that Tukten never arrives at their designated meeting spot. After several fruitless inquiries to villagers about his whereabouts, Matthiessen bicycles back to Kathmandu, the capital city of Nepal.

He notes no disappointment, only a gentle call to action: “The purpose of meditation is not enlightenment; it is to pay attention even at unextraordinary times, to be of the present, nothing-but-the-present, to bear this mindfulness of now into each event of ordinary life.”

The Sherpa Tukten is out there somewhere, and so is the snow leopard.