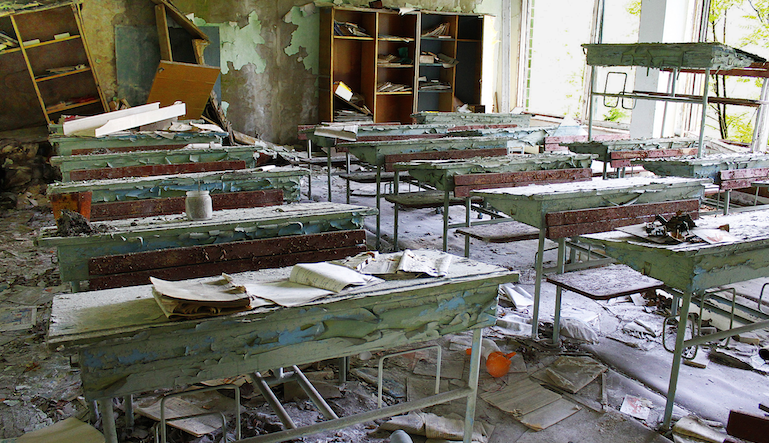 I’ve long been a generally well-behaved person, and as an adult I have come to suspect that this isn’t necessarily one of my more admirable traits. This suspicion, I think, is part of what draws me so intensely to Jim Shepard’s wonderful heartbreak of a story “The Zero-Meter Diving Team,” from the collection Like You’d Understand, Anyway.

The story follows three brothers’ experience of the Chernobyl nuclear disaster. Their father is the director of the Physico-Energy Institute. Our narrator Boris, the oldest brother, is the chief engineer of the Department of Nuclear Energy. The next brother, Mikhail, is a senior turbine engineer, stationed at reactor Unit No. 4. Their youngest half-brother, Petya, works construction at the spent fuel depository. “So you can see,” the narrator tells us, “that our family was right in the thick of what followed.” It descends on them from every side.

The descending thing, of course, is a disaster of mythic proportions. This story is so haunting, in part because Shepard’s language concerning the actual physical experience of the explosion and fallout is vivid and powerful enough to make us feel we’re living it too. Mikhail, on duty at the time of the accident, feels “as though something was being boiled in his chest.” When Boris locates him afterward, Mikhail has been burned a deep brown, “so still and dark it looked like someone had carved his life mask from a rich tropical wood.” Inside the hospital ward, “The smell was stunning. Nurses with trays skidded around corners.” We also feel and see and smell.

Just as haunting is Shepard’s anchoring of the catastrophe to the system within which it occurs. As Boris, stricken with guilt, tries to understand what has happened, how it could have happened, he ends up finding causes for both the accident itself and the horrifying mismanagement of the response to it in a social structure that rewards rule-following and flattens questioning. He explains that “our schools directed all their efforts to inculcating industriousness (somewhat successfully), obedience (fairly successfully), and toadyism (very successfully). Each graduation produced a new crop of little yes-people.” (He counts himself as a particularly successful yes-person, and his ravening guilt makes this story devastating to read.) Boris goes back over the sequence of events that led the nuclear reactor to explode—a test that involved a small bit of improvising and then a strict, misplaced adherence to standard procedure—and concludes that “Only men with no understanding of what goes on inside a reactor could have done such a thing.” Understanding, these men have been taught, is not a priority; procedure on the other hand is sacred. In the aftermath of the actual explosion too, doom continues to unfurl systematically, and for far too long a time no one breaks any rules to stop it:

The Party’s primary concern at that point seemed to be to establish that such an accident on such a scale could not happen at such a plant. We had adequate stores of potassium iodide pills, which would at least have prevented thyroid absorption of iodine-131. We were forbidden as yet to authorize their distribution.

So throughout the afternoon children played in the streets. Mothers hung laundry. It was a beautiful day. Radioactivity collected in the hair and clothes.

There is a reality actually occurring that everyone has been trained to think impossible. They have also been trained to trust their training over reality, that each of them has a certain role, never to be overstepped—and no one’s role contains the responsibility for this unanticipated disaster. So they all just watch as those mothers and children are sucked into tragedy, there in this bucolic scene full of invisible poisons.

What I love and admire most about this story is the way the larger tragedy is tied to its characters’ familial one, and how on the level of family, too, questions of power and hierarchy play an essential role in both events themselves and those events’ effects. The actual fates these brothers meet, how much physical damage is done to each of them, corresponds roughly (though not exactly) to their positions within their family. Those positions are easy to discern, because the three brothers have been raised in a deliberate pecking order. When their father punishes them in childhood,

Pain is part of the world, these boys are learning, and either you’re inflicting it or experiencing it. Your power can be measured by how far down the chain you have to go before you become actor instead of object. When punished and when punishing, these brothers shape one another. Boris informs us, “People said I owed my position to my father, and Mikhail owed his position to me. (‘More than they know,’ he said grimly, when I told him that.)” The hierarchical interactions that have always characterized their lives have reinforced the traits that put each exactly where he is on the night of the nuclear disaster. Petya, always at the bottom of every chain, has learned that he might as well be hapless and bumbling—and bumbles into the catastrophe, fishing on the river downwind from the reactor when it explodes. Mikhail, prized but never as prized as Boris, “lived a large portion of his life in that state of mind in which you take a risk and deny the risk at the same time, out of rage,” a state that defines his work-life, too, and that will cost him. And Boris, whom systems have always served, fails to question the existing order in time to prevent either the explosion or the inaction that follows. He will spend the rest of his life trying to find a way that “I could still be someone I could live with.” They all experience Chernobyl in the same systematic, positional way they’ve always lived. Every one of them is worse for it.

I think about the risks of too-rigorous systems often, as a teacher and a parent and an inhabitant of the world. How important it is not to confuse good behavior and goodness. How crucial it is to make sure the grooves structures can wear into minds aren’t too deep, even if we trust those structures—because other things, later on, can use those grooves as fingerholds.