Home
»
Reading
»
The Zippo Museum in Bradford, PA and Zippo Sightings in Literature 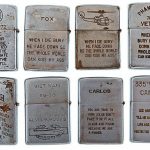 I admire a story the way I admire a Zippo lighter—perfectly, even simply engineered to do what is required to do, with nothing extra tacked on.  I’m thinking of an unadorned lighter here, simple brushed steel, not one with a Harley Davidson logo on the side.  Wick, flint, wind guard, lighter fluid, cover, period.  It makes fire, nothing more.” Andrew G. Forbes

Once at a conference, a new acquaintance looked at my nametag and said, “What’s in Bradford, PA?”

I realized he thought I meant that there was nothing in Bradford, PA, as in zippo, zilch, nada. And it is a relatively small, remote town, but what I’d really meant was that the Zippo lighter was invented in Bradford, where it’s still manufactured. Many buildings are named after Zippo inventor George G. Blaisdell, the local Y gymnastics team is called the Bradford Flames, and our local newspaper used to report on “Zippo sightings” in popular culture, making me alert to my own Zippo sightings in literature.

He teaches me how to flip my Zippo lighter from hand to hand. He’s an idiot but he knows one good trick and now I know it too.” —Mary Robison, Why Did I Ever

While I’ve never smoked and still use matches to light birthday and Hanukkah candles, I find Zippo’s museum, on a road with custom-made streetlights shaped like Zippos, to be surprisingly fun. I know moms who take their toddlers to just sit and watch the mesmerizing audio-kinetic ball machine there during snowy Bradford winters. There’s a seven-foot tall American flag made of 3,393 red, white, and blue lighters called “Old Glow’ry”; an oddly intriguing sculpture made from compressed Zippo lighters; a life-sized tableau of one soldier lighting another’s cigarette in a foxhole; and displays related to manufacturing, history, and popular culture.

Do you want to buy some Zippo lighters? “ he asked Yossarian. “They were stolen right from quartermaster.” —Joseph Heller, Catch 22

The museum is a kind of combination celebration of kitschy pop culture and the indomitable human spirit, of Zippo folk art, of the versatility and indestructibility of an “American icon,” of durability and endurance and loyalty. Zippo lighters come with a lifetime guarantee and broken ones are fixed or replaced for free. One of my favorite displays shows crumbs and slivers of lighters that have been through garbage disposals or ice crushers and run over by trains, lawn mowers, and bulldozers, the message being that it takes a lot to destroy a Zippo lighter.

He kept his Marlboros rolled up in one of his T-shirt sleeves, and he lit his cigarettes with a Zippo lighter stamped with a picture of a naked lady bending over.”—Jeanette Walls, The Glass Castle

The museum also focuses on the lighter’s adaptability and cultural ubiquity with its loop of clips from movies featuring Zippos, like Jurassic Park, Bridge on the River Kwai, Die Hard, and Green Card. There’s also a display related to Zippos in rock music, including a Lynyrd Skynyrd album cover featuring a lighter.

He keeps flicking the lid of his Zippo open and then, after long intervals, closed, and the woman in the sundries store closes her eyes and remembers her husband when she first fell in love with him. . . “—Lee Martin, “Sunday”

Another of my favorite displays focuses on Zippo lighters as “trench art”: slates for American GIs in Vietnam on which they inscribed “sentiments or sketches expressing feelings about war, conflict, and thoughts of home”—lines like

We the
Unwilling
Led by the
Unqualified
To kill the
Unfortunate
Die for the
Ungrateful.

Walking through the museum, it strikes me that lighters and books have some things in common. Although I find the decline in smoking much happier news than the decline in reading, both lighters and books have seemingly lost cultural relevance. Cell phones have replaced lighters at rock concerts; electronic devices are edging out paper books. But both are really just containers for things that we can’t live without: words, stories, fire.

But in the end, what cannot be extinguished? The life of a company, a town, my life, flying out of Bradford after a day of sleet and freezing rain, praying that the ground crew remembered to de-ice the wings?
. . .
Zippo–‘Use one to start something.’
Zippo–‘The lighter that works.’

Zippo–the streetlighters glow their unquenchable red as we circle the town,
then head over the tree-clad hills for Pittsburgh.”