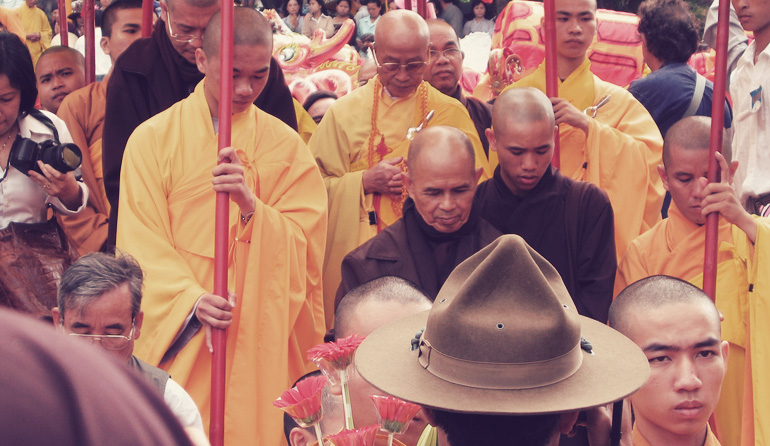 One of the gifts Thich Nhat Hanh has in common with some of my other favorite authors is that when I read him I feel as if he is letting me and me alone in on a secret. The reality is I share the ninety-year-old Vietnamese Buddhist monk with millions of admirers.

Thay, as he prefers to be called, is a contemporary of Martin Luther King—born in 1926, more than two years before him. King nominated Thay for the Nobel Peace Prize in 1967 for his peaceful protests calling for the end of the Vietnam War. Many historians credit Thay for persuading King to speak out against the war in the final years of his life. Speaking out led to Thay being banished from Vietnam, and he eventually settled in France, where he set up Plum Village, a Buddhist Community, which is thriving to this day.

I didn’t know any of this when I first encountered Thay. I knew him first as an advocate of Zen Buddhism, then as a meditation leader and finally, in the last year or so, as a writer. He is an important writer—he’ll be read for centuries—the author of dozens of books in multiple languages, but if he appears in a canon it will be a spiritual rather than literary one.

I suspect this has to do with swiftness with which self-help or spiritual books are dismissed for their literary bona fides. That’s both unfortunate and ironic because storytelling is a cornerstone of the world’s major religions. Secular stories, by comparison, are a recent historical phenomenon.

The work I’ve read from Thay straddles genres, between inspiration, self-help, and classical storytelling. His books are short essay collections. Inside those essays are traditional narratives. In “Silence: The Power of Quiet in a World Full of Noise,” Thay describes an encounter with a French soldier who was part of a force occupying Vietnam at the time. Repeated meetings led to an understanding between them and the discovery by the soldier of the empathy he had for the Vietnamese people.

In a passage from the same book that can be taken less literally, Thay explains how the Buddha brightened the dark heart of a serial killer.

The skill of Thay’s writing is his ability to bring intangible sentiments to life through figurative language. A favorite is from “Fragrant Palm Leaves” to encourage living in favor of circumspection:

When you know how to fly you don’t need a street map.

Or in “The Sun My Heart,” where he talks about the “pollution” in our consciousness.

One of his best known allegories is how we need mud (some of the unpleasantness of life) to create the lotus (the beauty of life).

Nowhere does Thay’s writing soar as high as when he’s writing about his belief in Interbeing, a concept he created that emphasizes the connection between all living things. In this way, he says in “Love Letter to the Earth,” those of us on this planet are like the “passengers on a small boat.”

Also in “Love Letter,” Thay observes that in “each step you take you are touching the whole earth—touching peace.”

This connects readers to the person in Australia or China or any other faraway place that seems alien, but in actuality is part of the shared experience of humanity.

The writing is evocative and urgent, yet classical. He returns often to the pillars of mindfulness, the breath and being present. If someone argued Thay’s writing is occasionally repetitive I could not mount much by way of a defense.

In this way, Thay’s work sounds like traditional spiritual lit. But that does it a disservice. He is a modern figure, one who does not back down from his radical beliefs.

In “Love Letter to the Earth” he calls for a “revolution in consciousness.”

Later, he says: “What we often refer to as patriotism is actually a barrier that prevents us from seeing we’re all children of the same mother.”

Thay’s literary output over the last decade has been staggering. The mention of his name to a new acquaintance brings a smile of recognition with surprising frequency. Like I did, people have come to him in different ways, the product of our interconnected world. Proof, Thay might say, of the power of Interbeing.

But Thay’s high-production days have likely come to an end. In 2014, he suffered a stroke that requires him to be under continuous care.

Thay’s immense body of work demonstrates him to be that rare being who mastered his thoughts and thereafter mastered his actions. Which is why for me and many others, he exists on an elevated plane, the embodiment of what we are capable of in this life.